There was a strange development last night. After weeks of not doing anything at all, I got bored last night and made a doiley. Here it is: 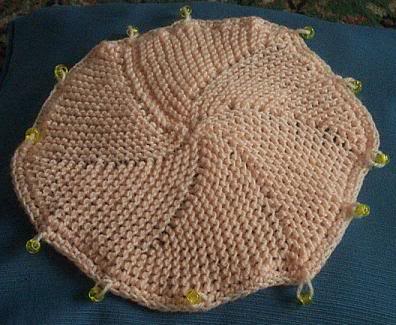 I've made doilies before, but not for a while, and never a knitted one before (only crocheted).

I used a pattern which involved 'short rows' that I got from a book on knitting techniques. It was much easier than it looks. I added 2 rows of crochet, incorporating the beads, around the edge, and I got quite a sense of satisfaction from doing it.
I'm completely disillusioned with the coathangers. I can't even be bothered finishing the last one, let alone posting pictures of them. I think I really prefer doilies for a short, easy project. There's no messy sewing and annoying stuffing afterwards, you can do them in knitting or crochet, you can just start with no idea what you're going to do and end up with something pretty cool ... and you can never have enough doilies, right? *wry smirk*

I think I've decided to give the doiley to my friend Pippa, who's birthday it is on Saturday. I've contributed to a huge gift - a silver bracelet from Tiffany's, but I wanted to give her a little something extra, just from me. About halfway through making the doiley I decided to give it to her. (I probably would have made it out of nicer wool if I'd had that intention from the beginning.) The irony of the contrast is not lost on me - a beautiful, expensive bracelet from the world's most renowned jewellers, and a crappy-arse doiley that it cost me nothing to make! *another wry smirk*

Oh well, the good thing about making things as gifts for people is that they have to like them.