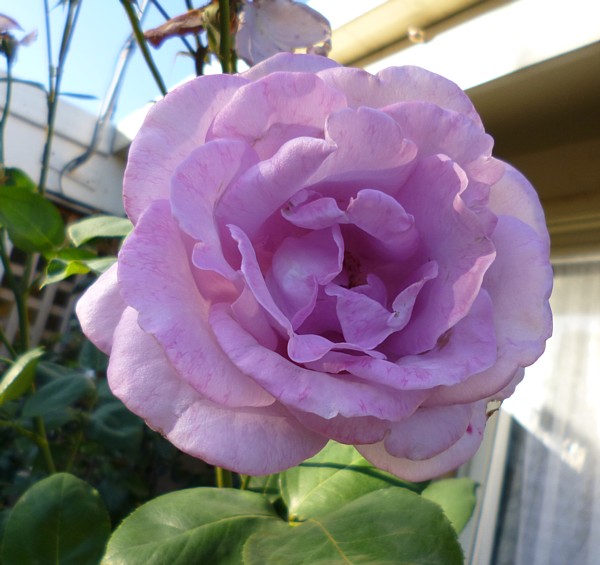 When I was drawing up my 101 Things List a couple of months ago, I looked through my 1,001 Things to Do Before I Die list for inspiration. One of the items listed there was "bathe in rose petals". It was one of those things I added just on a whim, thinking I'd probably never get around to it. But when I saw it again, my thinking on it had changed completely. It went from:

How ridiculously decadent! Where am I going to get enough roses for that? From a florist?! I'd need at least a dozen, that's got to be at least $80. Madness!

Aha! That's a good way to get rid of the glut of roses in my garden every Spring! All I need to do is wait until they bloom, and Bob's your uncle! 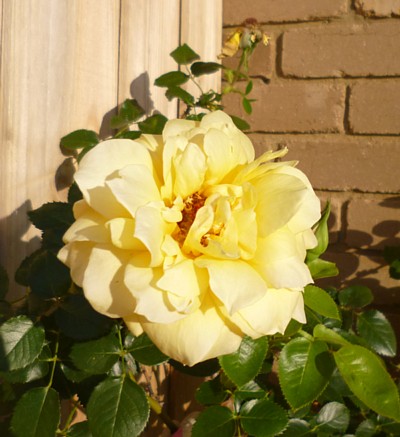 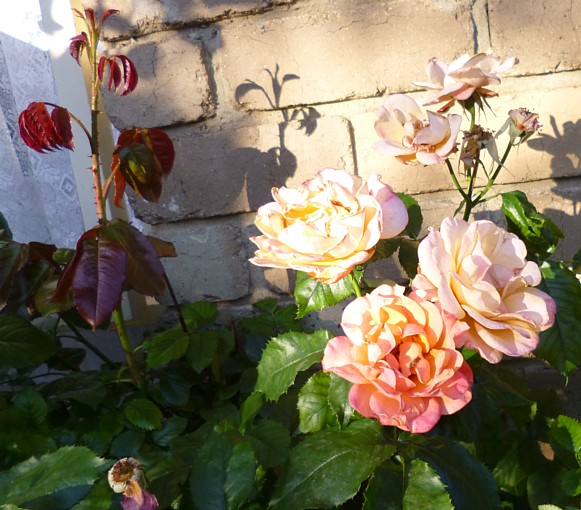 Now that a source for the roses is taken care of, my only concern was the timing. The roses bloom in late Spring and Summer, and the weather might be too warm for a bath at this time of year. But then I remembered that I live in Melbourne, where it's equally likely to be 18oC in the middle of Summer as to be 35oC. As it turned out, after blooming began I only had to wait a week for the right climatic conditions. Yesterday I selected some nice fully-open specimens and collected them in my basket. Later in the evening, I plucked them and dropped the petals into the running bathwater. I didn't add anything else because I was curious to see what effect the roses alone would have. 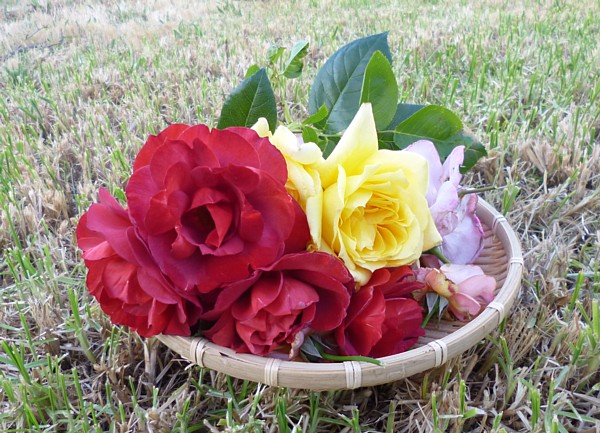 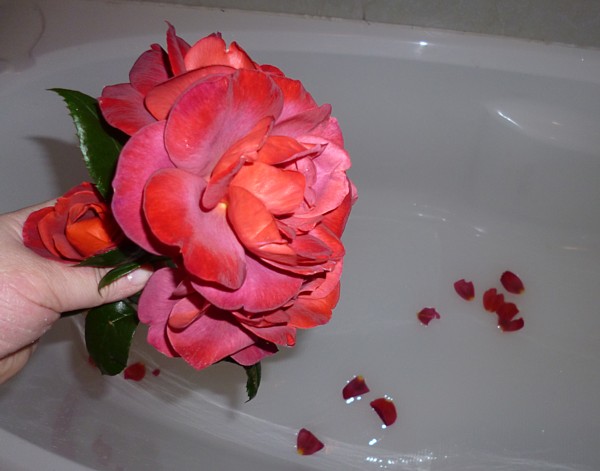 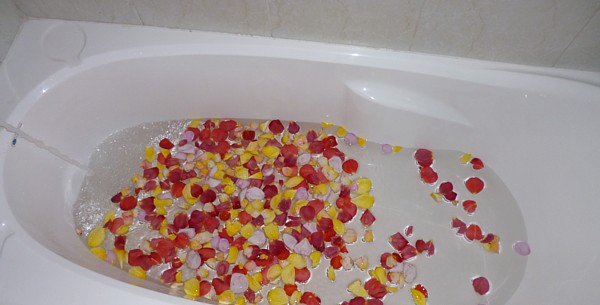 Unfortunately I have to report that bathing in rose petals didn't quite live up to my expectations. I was expecting a strong rose scent, but it was actually very faint, and began to dissipate before long. I didn't step out of the tub decadently smelling of roses, with silky skin from absorbing the oils, or any of those romantic notions that I'd imagined. When I gathered up the petals and used them to scrub myself, more scent was released, but it didn't last, and the petals were left looking worse for wear. I guess roses are bred more for their appearance than their scent these days. 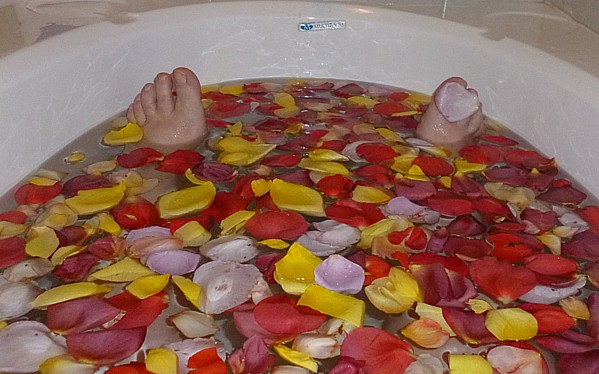 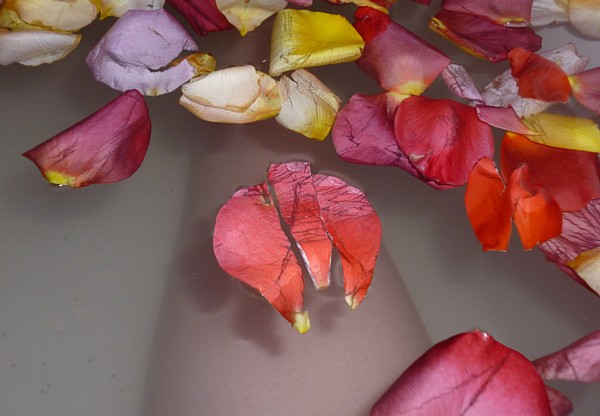 Having said that, the visual effect of the rose petals in the bath was beautiful and made me feel very special. Harvesting them and plucking them was a fun activity, so I wouldn't mind doing that again. I would definitely repeat the experience, but with some essential oils or other scents added next time. And it wasn't until I was editing the photos for this post that I thought to myself, why didn't I light some candles?? 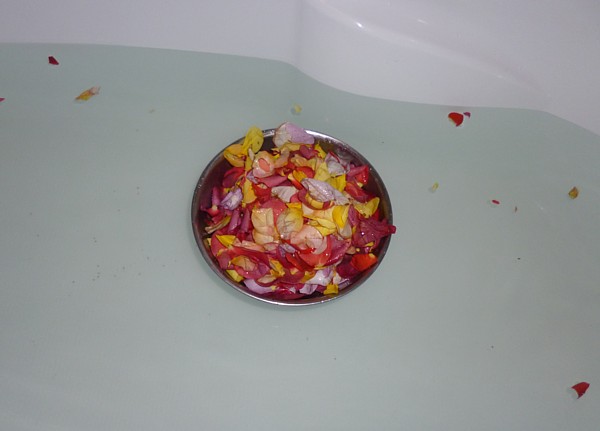 I feel a little guilty writing about this, as for such a long time, I thought it was an activity out of my reach. Dear readers, I hope that one day you can try this too. Perhaps you have a relative or neighbour with a rose garden who could spare a dozen or so? I hope so.


I have a confession to make. I've been failing miserably at NaNoWriMo so far.

If you remember, I decided to do a variant where I spent some time writing outside each day. I was very motivated and did well in the first few days, however, I started to drop off, and not for the reason I thought I would. It wasn't lack of motivation that stopped me, it was the fact that the first week was very rainy, and any time I had some free time, it was pouring rain outside! 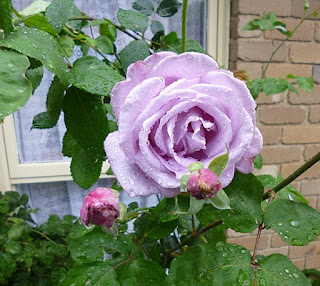 However, on the first Sunday it was a lovely day, and I ended up spending a whole hour writing some reflections on an art journalling course I'm doing at the moment. Since then, I've lost motivation completely. I'm not even in the mood to write blog posts. Yes, I'm writing one today, but I'm in that mood where every sentenced is forced and it just seems so mediocre. 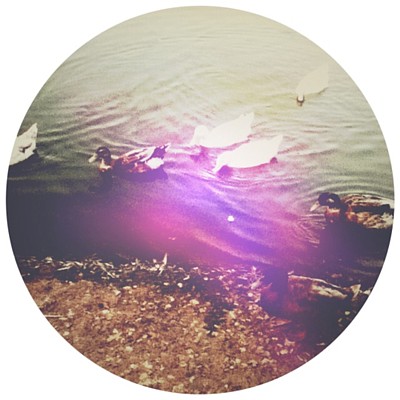 I've come to the conclusion that I'm just not the kind of person that can write every day. When I get home from work, I'm tired and just want to relax with a project that's fun and easy. (My granny square blanket is the perfect candidate -- the stitches are easy and repetitive.) When I'm inspired though, I just can't stop myself. If I've had an interesting dream, I'll type it out into my ipod on the train in the morning. If I've seen an interesting person, I'll write a few words about them in my notebook as I'm heading back from my lunchbreak.

If I have anything to report at the end of NaNoWriMo, then I will. Don't expect the next Harry Potter series, though.
No comments:

In the Kitchen : Japanese Pasta Naporitan

A few weeks ago, I had a craving for pasta, so I decided to make Pasta Naporitan. I was inspired by one of my favourite YouTube Channels: Cooking With Dog. The recipe can be found here, and a history of the dish in this video.

In case the video is too TL;DR for you, in a nutshell: Pasta Naporitan was created by a Japanese chef just after World War II. The hotel he worked in was full of American officers, and he wanted to cook dishes that they were used to. Unfortunately, tomatoes weren't grown in Japan at that time, and proper pasta sauce (passata) was unobtainable, so he used ketchup from U.S. Army rations to create the dish.

I'd heard in the past of making a tomato pasta dish using tomato sauce (ketchup), but I have to admit, I just thought this was something made up by University students with no money and even less cooking skills. Once I saw the video and learned the history behind the dish, I was eager to try it, and I was pleasantly surprised!

I made a few substitutions as I didn't have half of the ingredients from the recipe. This is quite common in my household, but it always seems to turn out well in the end! Firstly, as per the history video, I cooked the pasta, tossed it in oil and put it in the fridge for an hour. This gives the pasta a chewier texture. 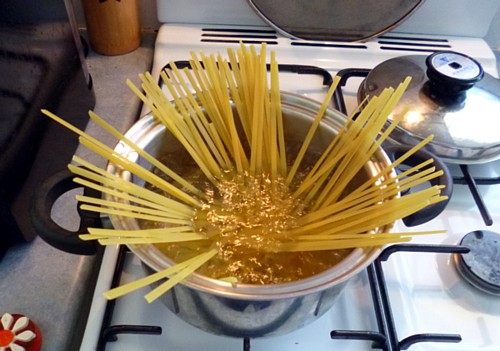 I tried to do that thing you always see on cooking shows where the spaghetti is fanned out as it goes into the water. I think I did an OK job! 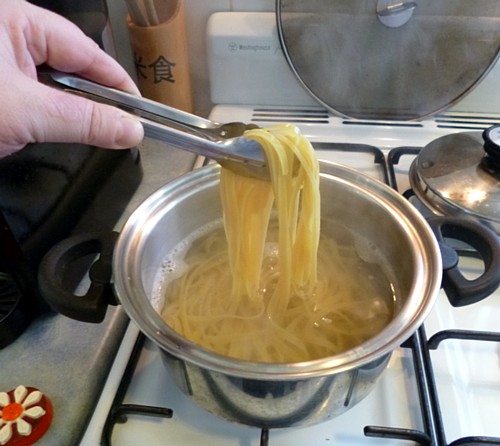 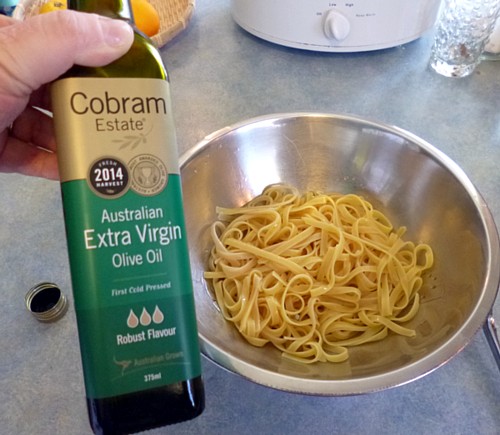 While the pasta was in the fridge, I gathered together the rest of the ingredients: ham, onion, olives, pickled vegetables, rocket leaves, garlic, and dried herbs. 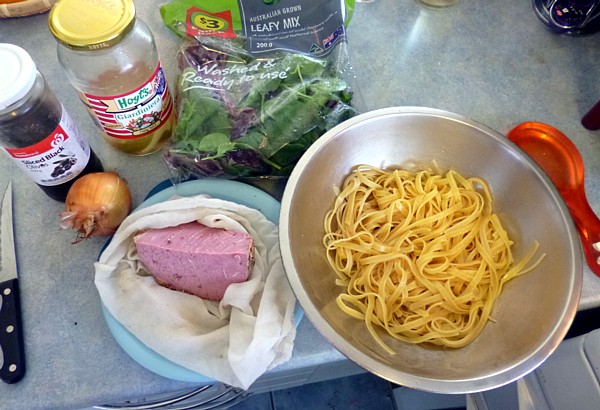 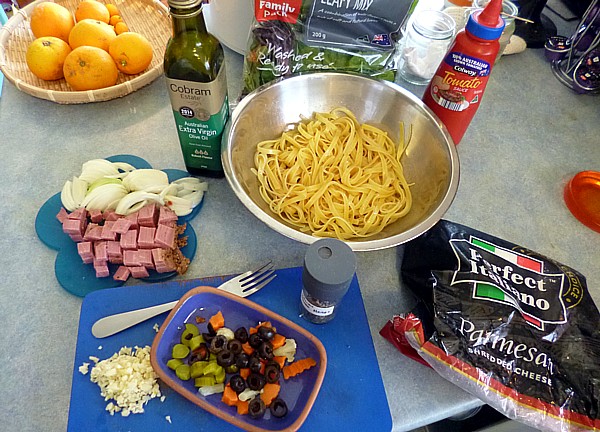 Frying the onion, ham and garlic: 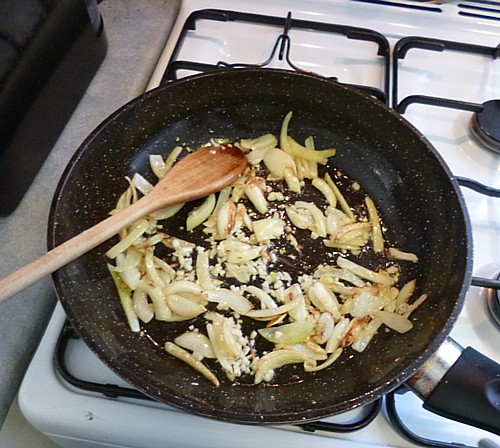 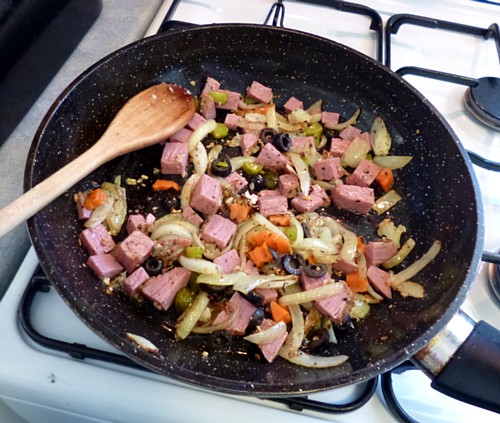 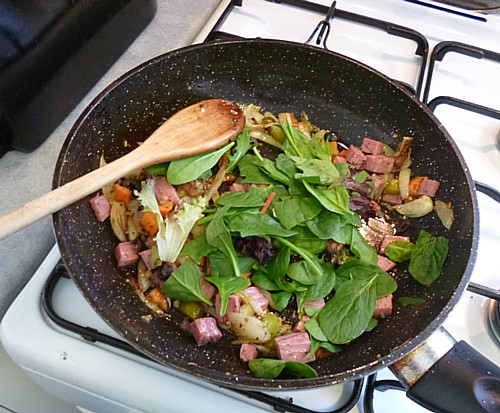 Adding the pasta. The fridge trick really seemed to work in giving the pasta an al dente texture. I'll remember that one in future. 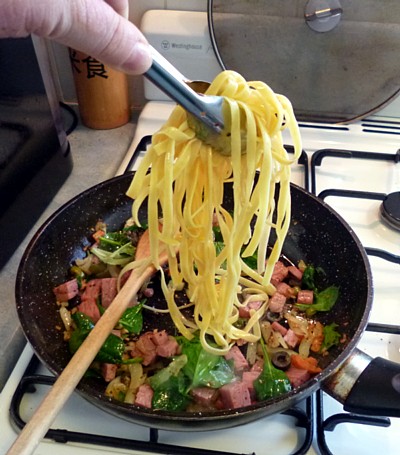 Adding the tomato sauce. This really felt quite wrong, like I was breaking all the rules of 'good' cooking. But I ploughed on.

Adding an unhealthy sumptuous amount of butter and Parmesan cheese: 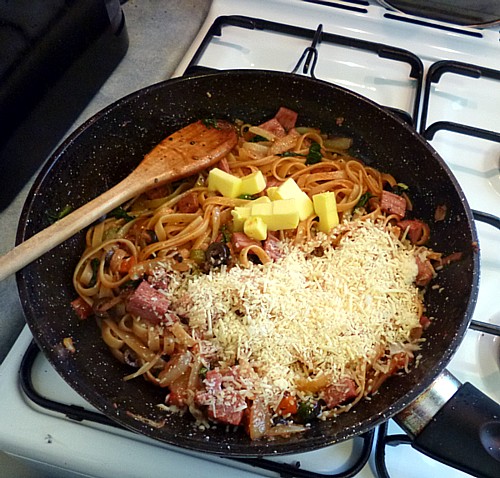 The end result. I sprinkled on some fried onion as a garnish, to enhance the East-West theme. 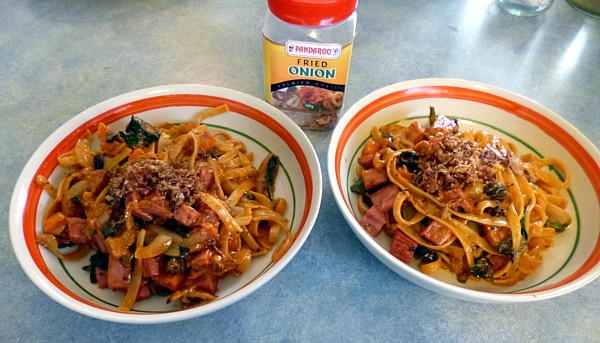 I was very pleasantly surprised with how this dish turned out. I don't like strong tomato taste in food, and using the tomato sauce/ketchup rather than passata or tomato paste gave it a more subtle flavour. The butter and cheese added a satisfying richness, too. I will definitely make it again.

A final note:
While I was cooking, Husband chose a Bluray to watch while we ate. He just happened to choose Lupin III: The Castle of Cagliostro. A Japanese anime set in a vaguely Italian Duchy, complete with kitschy Italian restaurant scene? The perfect accompaniment.

It's Spring!
This time of year is when the garden really starts to come to life again. There's something new and different to observe every single day, and I'm learning so much. Plum saplings don't take well to being dug up and put in a pot. The Christmas cactus looks wilted just after it finishes flowering, but it soon recovers.

The warmer weather also gets me excited for another reason -- the festive season is just around the corner. I don't officially celebrate Christmas, but in the last few years I haven't been able to resist the things I used to love as a child. The Christmas tree, pastries and sweets, and special meals with friends. Then of course it seems like just a millisecond until New Year, which is an important occasion for me.

I've also been motivated to get a good head-start in my 101 Things in 1,001 Days list by watching lots of movies, pampering myself, and eating a lot.

What I've been cooking ...
My interest in cooking different things has surfaced again. I wanted to make a salad from a recipe I found in a magazine, but by the time I got home from the supermarket, I realised I'd only bought 2 of the ingredients I needed! So I just threw in whatever I had in the house, Husband made the dressing (he's good at mixing flavours) and it turned out very well. I made it at the start of the month, so I can't remember now what's in it aside from what can be seen in the photo. 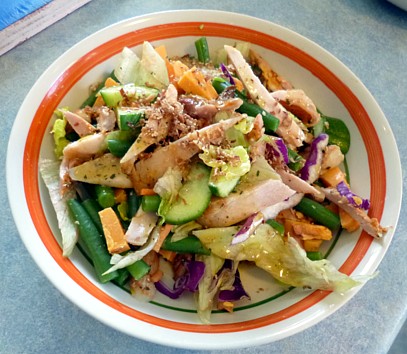 A few weeks later, I had a craving for pesto, so I made this fettucine with bacon, mushrooms and basil pesto. Very satisfying. 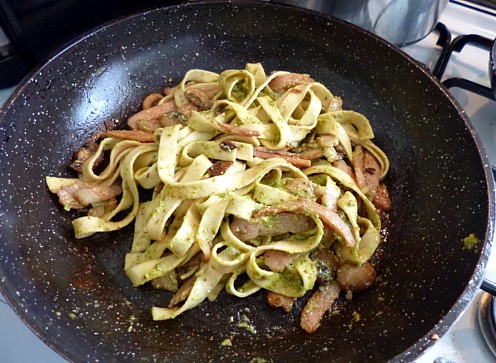 Last but not least, it was Husband's birthday towards the end of the month. Making him a decorated cake for his birthday every year is on my list of Thing, so I asked him what he wanted. He said, "a doughnut cake with mini cupcakes in the hole!" He was joking, but what my man wants, he gets, so here it is: 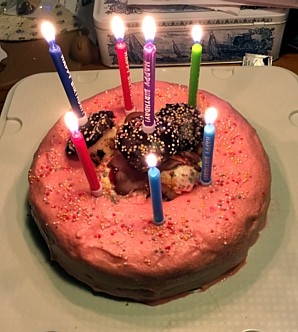 What I've been working on ...
I've started crocheting a little bit again. I lost my crocheting mojo for quite a few months. I've been having issues with my eczema, which is on my hand and makes it uncomfortable to work with fibre, but it's clearing up now. I finished off one square for my Grannyland blanket and started another one: 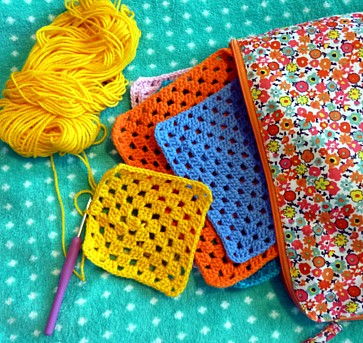 What I've been sorting ...
I finally got around to making a space for my special things. Many of my treasures are still packed, but at least there's a nice place now to put the ones I have found so far. I've been having fun thinking of ways to improve it. This shelf is right next to my bed, so I can see it every morning and every night. 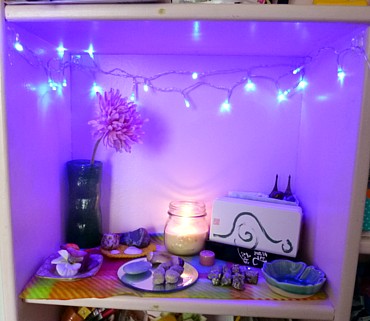 celebrated the Marimo festival ~ wrote some haiku ~ chose a puzzle book to work on ~ wrote a doll clothes review ~ watched 3 movies on Asian Pop Weekend ~ bought more pathtags ~ did some practice drawings ~ took some photos ~ worked on my conscript ~ wrote a reflective piece ~ bought watercolour paper and more canvases ~ gardened (not much) ~ posted my Exploding Kittens review ~ subscribed to some new blogs ~ picked oranges ~ dyed my hair ~ went to the Big Bang concert ~ went to a new restaurant ~ napped (several times!) ~ created some new Pinterest boards ~ got a massage ~ decided on my NaNoWriMo theme ~ went to PAX; bought 5 games