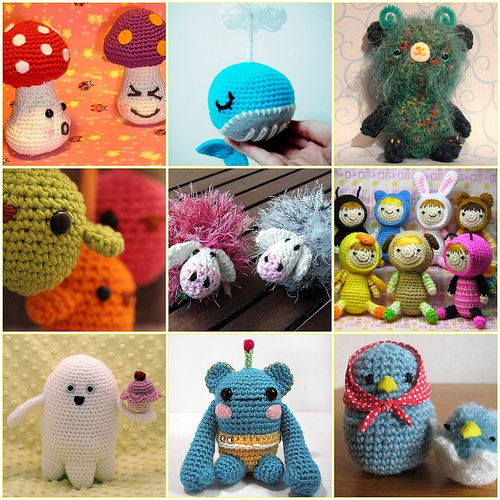 Just a quick update on what little I've been doing over the last few days. I started the newest scarf which is to be in pinks with purple accents. I like those colours, so I have no problem with that, though I'm starting to run out of yarns of the appropriate colour and thickness. Oh no! Don't tell me I have to have S.E.X. again!*

I spent a little time on Sunday organising the hobby room. I re-stacked the boxes of cans from the factory outlet trip so that I could sit at the big desk, and amalgamated two piles of random stuff that were on the desk into one so that I had some room to do stuff on it. When it comes to tidying, one pile is better than two, right? Baby steps!

I managed to clear enough space to get out my pencils and some scrap paper and draw out the cutting pattern for the monster softie that's been floating around in my head. The one that popped into my lop-sided brain when I was having a quite painful but very remedial massage a few weeks ago. He's been fighting to get out ever since. Unfortunately though, when faced with the prospect of digging the fabric out of the place where I'd previously stashed it, my will gave out. It seems I stashed it a little too securely.

So I moved on to crochet. (Hence the amigurumi featured in this week's Mosaic.) I got out my second kokeshi doll that I'd so heartlessly abandoned a while back. I decided I didn't like her shape - her neck was too narrow and tapered. So I ripped back to face level and re-did it. I'm much happier with her now and hopefully I'll finish her soon.

Then I remembered that I'd promised to test a pattern for kittenbite, a fellow Etsyer. It's an amigurumi bottle of beer. I managed to get nearly half-way through it last night while I was watching a documentary about the search for extra-terrestrial life. I'm having fun with it. Results as they come in.

P.S. Can someone find a way for the creative yet time-poor to do two things at once? Has anyone tried knitting while on a treadmill? Doing weights with one hand and drawing with the other? No? Never mind.

* S.E.X. stands for Stash Enhancement eXpedition. Sorry if I frightened you-all there for a second. 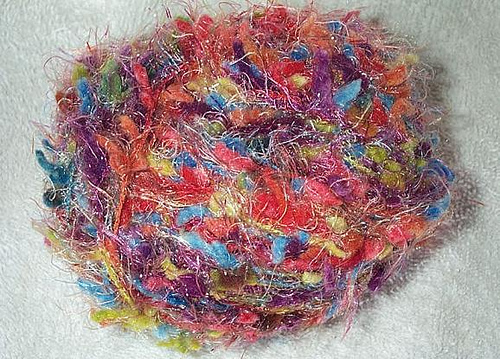 Here is a random ball of bizarrely coloured wool for your delectation (or revulsion, up to you). I bought it a few years ago and it's currently lurking in the further reaches of my stash. Why? I don't have any actual picturage but I feel the need to share. So here we are.

I haven't done much crafting this week, sorry to say. My life has mostly involved stressing during the day, and then in the evenings jogging and lifting large, round pieces of metal repeatedly.

I did finish the Purples and Pinks scarf that my friend asked me to make, and over a lovely catch-up at Nandos, I sold it to her, swapped it for money, initiated a currency-based barter .. Sheesh, no matter how I say it, it seems wrong! I'm still getting the hang of this craftin' for a livin' thing.

Meanwhile, a colleague of hers has asked me to make another scarf for her in pink colours, which I'm very excited about. At least that's something I know I can make! The test skinny scarves I've made have been a bit disappointing. The ends tend to curl. Hopefully a little blocking will sort that out, but I've never done blocking before and I'm worried that it won't work. I'll give it a go tomorrow though.

Also this week, I just have to mention that I received my Etsy order from lupin. Wow! I ordered a couple of zines and a brooch during her birthday sale, and she sent me about twice as much stuff as I'd ordered! Apparently it was to celebrate her 900th sale as well. (yay for her!) I've been watching her shop for a long time and more recently her blog and I really admire her stuff. Sad to say it took the promise of free stuff to get me to buy something, but I am the little crass, consumerist tight-arse. Contradictory, moi? Anyway, she's wonderful! I'm thinking of sending a little thank you gift back. Shhh, don't tell!

On Saturday it was Worldwide Knit in Public Day. It was also the day of the 2008 Melbourne Zombie Shuffle. When disparate worlds collide...

I went, I knitted (though I didn't shuffle), I met lots of people and had an all around lovely day. I was too lazy to take my own photos, so I stole some to make this week's mosaic: 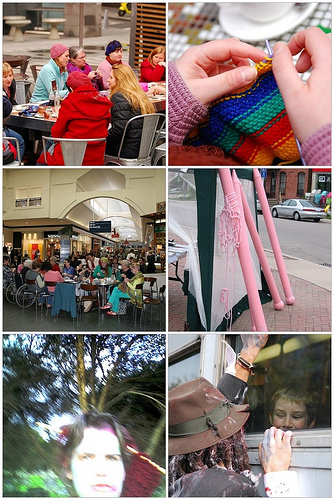 Some of the lovely people I met were:

* foreverknit [Blog] - thank you so much for organising the day! Her scarf was gorgeous!
* kittenkong [Ravelry] - I can't wait to see her finished clapotis!
* craftyscience [Ravelry] - I think she was using the 2 circular needle technique to knit her sock - impressive!
* live2knit [Etsy Shop] - was making a clapotis from her own hand-dyed yarn. The colour was so beautiful.
* gusseting [Ravelry] - had such a beautiful headband on!
* sonia [Blog] - was making the most wonderful multi-coloured entrelac thing. I didn't get a chance to find out exactly what it was, but it looked amazing.
* damo [Flickr] - the photographer and donator of some of the prizes.
* Some blogless girls who were very friendly as well.
* A lady who was sitting behind us who asked why we were there knitting. I explained that it was to meet people and share our projects, and she confessed that she knitted, but only ever in her lounge room at home. It was kinda cute! We told her to google WWKIP Day and come along next year.

I was very freaked out to hear that some of the others had heard of me. I wanted to ask, 'where? how? how could this be??' Also, I won a prize! Lil ole me! It was a new Cleckheaton pattern book from Australian Country Spinners: 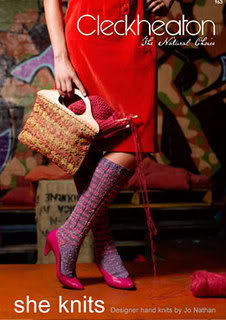 I love the styling and the patterns. I'm eyeing off the hearts vest with the crocheted tie closure.

Other things I enjoyed that day were:
* hundreds of zombies shuffling. A couple were even knitting!
* The Medieval Imagination exhibition at the State Library, despite half-hour wait to get in. It was completely worth it.
* dumplings and pork noodles
* San Churro hot chocolate
* the fact that it didn't rain

I love Melbourne!
No comments: 
Tomorrow is world-wide Knit in Public day. I've committed to going. The hermit emerges! Eeek! Tomorrow is also the annual Zombie Shuffle day. So I think it will be a good day to be in the city. I'm also going to the Mediaeval Imagination exhibition at the State Library. It closes on Sunday. Then in the evening I'm going to play SingStar. Should be a good day all around.

Now, which project should I bring??

I decided to participate in Mosaic Monday so that I'd at least be posting something regularly, even if it isn't actual content. Cause is a blog a blog when there's nothin' but tumbleweeds on it? (You can make the mosaics using the tool at Big Huge Labs, by the way). And seeing as I was going to post today anyway, I thought I'd make my pics into a mosaic for a little something different. 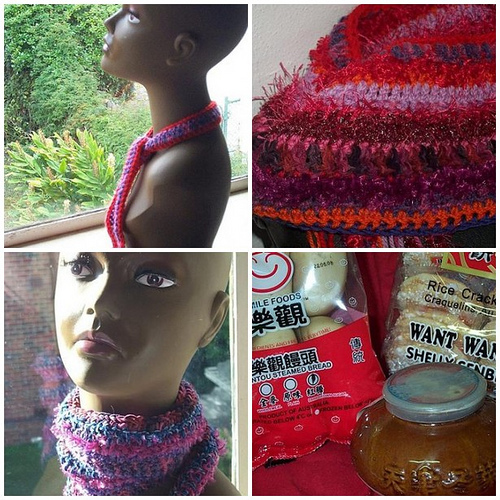 Top Left is a skinny scarf/lariat scarf type thing I've been developing. I've had the idea floating around in my head since I started making another scarf (see Top-Right) and had just done the first couple of rows. I'm trying to make something that can be worn as a traditional scarf, or wrapped like a tie or lariat if the wearer prefers. This one is a bit shorter than normal because I ran out of the purple wool, plus it's more of a test piece. I asked Boy if he could show me how to tie it like a tie, the way they do on TV (a half-Windsor knot is what it's called, I think - opening up Wikipedia now *). He teased me for not knowing how! Can you believe that? I say, why should I have to know how to do that, I'm not a man! Right??

Top Right is the scarf I was making in secret. I can reveal it now that it's been given to its recipient! Despite the fact that I received funds for it, I still made it with much love and good vibes. And a little relief that I might be able to pay my rego after all. If I make about 20 more in the next month! Heh! Yes, it's true. I've reached that milestone in every young person's life - their first car registration payment. Mama is so proud!

Bottom Left is the scarf I was making not in secret. It's only about half-done here, but I really like the way it's turning out, so I wanted to show it off. (This was taken last week - it's about two-thirds done now.) And modelling the scarf, I would like to introduce the newest addition to the ApartmentCat School of Modelling and Mediochre Photography - Hedda! The name just popped into my brain the other day. I resisted it at first because it's a pretty terrible pun, really. (Seriously?!) Plus she doesn't look very stereotypically Swedish. But who cares! According to babynames.com.au, Hedda means "The contentious one; A fighter" and I can definitely see that on her face in this picture! In the Top-Left pic she looks more pensive and thoughtful. It's funny what light and angles can do, isn't it?

Bottom Right shows some products that I bought on a trip to a local Asian Grocery the other day. The mosaic process cut the edges off all of the photos, but you can still make out the steam buns on the left which are 'Smile Foods' brand. (Awwww!) Plus over there on the right is a packet of 'Want Want' brand rice crackers. Mmmmm, I sure do! I've also included a ceramic jar of preserved vegetable, which is great in stir fries. It was only $2! I'd have paid more than that just for the jar itself.

* According to Wikipedia it is indeed called a Half-Windsor knot and it's one of the 82 (at least) ways to tie a tie. I reckon one way is enough for me to know. Although cravats are pretty cool...
No comments: My first issue of CRAFT magazine has arrived, finally!

Woohoo! I'm sure I'll be absorbed in its chunky goodness for some time to come.

Even Boy had a read of it for a while:

...I was lying awake obsessing. But not over work or how fat I am like usual. I had images of softies going through my head. Softies for Mirabel. I really need to get out the sewing machine and some fabric and purge this obsession. Soon!

I also had a dream that I visited Meet Me At Mike's, the shop that's collecting and displaying all the softies before they're auctioned for the Mirabel Foundation. I've never been there. I think I need to go there.
No comments: