Here are some pictures of the two washcloths I made last week for Baby Nephew Alex (well, more for his Mum to use on him, really!). I've been interested in dishcloth / facewasher patterns for a while. There are so many different patterns and colours, they're quick and easy to make, and then you get to use them every day! Having something handmade and colourful always make those daily tasks much more fun. (Or slightly less tedious, anyway.)

In one week, I managed to make two:

Item number 1 below is a knit/purl relief cloth with a Rubber Ducky on it. Cute! The pattern is from Ravelry [member access only]. I enjoyed making this one. The only issue was - it only came in the form of a chart, and I can't read charts for the life of me, so I had to spend some time 'translating' it into written form, i.e. Knit 4, Purl 3, Knit 7, etc. I think I made a mistake somewhere on approximately the 50th row, but I managed to fix it up as I went along. 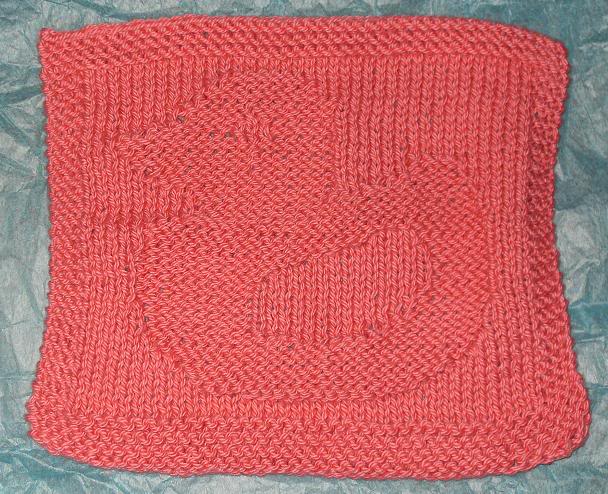 Rubber Ducky in Ochre.
The second cloth was my first attempt at Illusion Knitting. Check it out. This is how it looks straight-on: 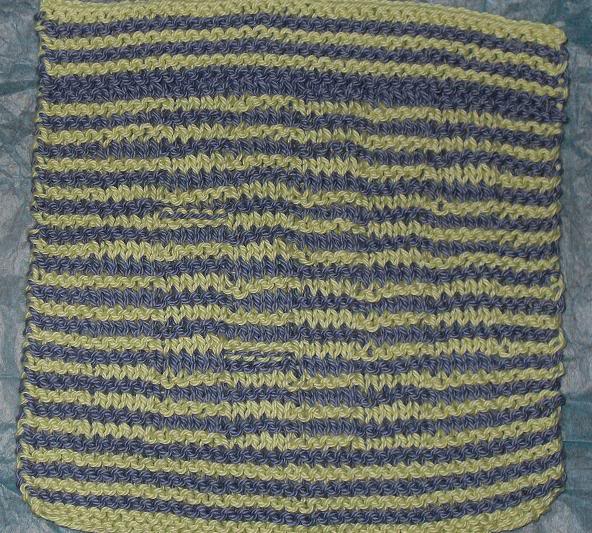 Chequerboard in Honeydew and Denim - try to ignore the mistakes!
But if you lay it out flat and look at it from an angle, a picture emerges - voila!!:

One has to bend right over to see this effect.
See? See what I did there?
It looks really cool in the picture, but actually, I'm not that impressed with Illusion Knitting. I've only ever seen it used for scarves and dishcloths. And how often are you going to lay your scarf out on a flat surface to look at the picture? The chequerboard pattern was just a simple beginner's pattern, true, but they all look the same when viewed straight-on - i.e. stripes with weird, slightly bumpy bits here and there. The process of knitting it was intensively boring, and would be ten times worse with a more complicated picture. So my answer to the question of Illusion Knitting is, "thanks, but no thanks."

The yarn for both of these is Cotton from Bendigo Woollen Mills. Yeah, it seems a little exxy at $12 per ball, but they're 200g balls rather than the usual 50g. That's massive! The balls didn't look any smaller at all after I'd finished, so I think you could squeeze at least 6 washcloths out of each one. Or 4 hats. Or 2/3 of a shrug....

In more current news, I've started making a hat for my friend Bec who is doing the World's Greatest Shave. I'm so proud of her! When she asked me to knit her a hat, I was eager to get straight to it. Hopefully there'll be something worth photographing soon.
No comments:

I've been rather busy lately, and here's the reason why! 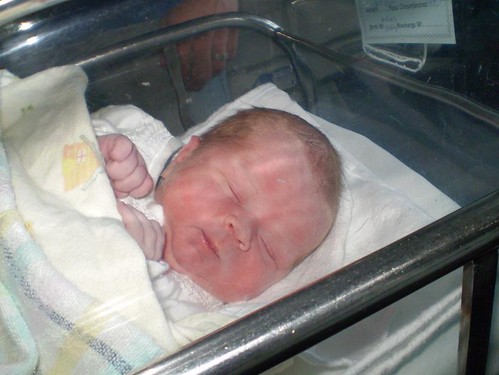 Introducing my nephew Alex.
Awwwwwwwwwww. I hate babies, but I love this kid!
I've been working hard on things for him, and done lots of work in my art journal. I'm also taking a new approach to writing. I've had ecstatic highs, and crushing lows. What is this, a cheap romance novel?

I'll show you some of this stuff when I get around to taking some photos.

Have a good week!
xx
No comments:

* I've painted my fingernails every week.

* I exercised even when it was hot.