I'm glad that I've been monitoring my bonsai regularly, because the wire on my Callistemon Salignus sapling has been cutting in after only 2 months on. I'm hesitant to label any of my plants 'bonsai', but there are plenty of other terms out there that I can use: 'pre-bonsai', 'potensai', even 'tachiagari' ('starting-out'). In some ways, this plant is a tachiagari, as it's only a few years old, barely past sapling stage, and very much looks like a young plant. But it could also be classified as a 'pre-bonsai', as it's already in training. I like to categorise things, if you haven't noticed already! 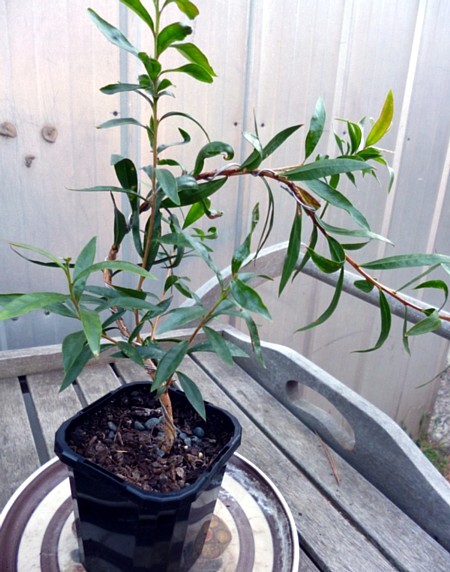 I was actually pleased that the wire on my Callistemon was starting to cut in already, because I'd done such a newb job with it (my first ever wiring), that I was relieved to get rid of it!

Noob Lessons Learned:
1. Use the right type of wire!
2. Try to avoid creating an Alphabet tree! 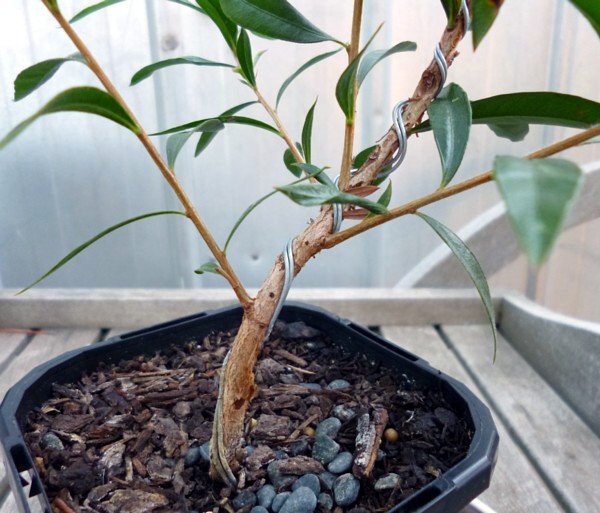 Several weeks after wiring my tree the first time, I read a post on styling which said to try and avoid making regular 'S' shapes with the branches. Mine wasn't quite that, but it did have a disctinctive and embarrassingly unnatural-looking 'C' shape. (Hence the 'Alphabet tree'.) 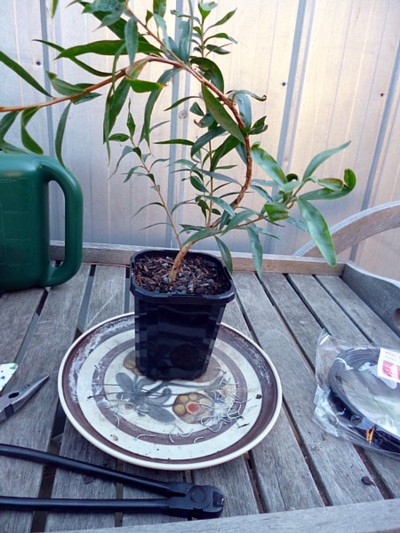 This was my chance to make amends, much sooner than I thought I'd be able to. Having used the wrong type of wire (steel: much stiffer than aluminium), it was very difficult to get off. I nicked the trunk in a few places. Oops. That's possibly inevitable if the wire has cut in. That's what I'd like to think, anyway. (Red arrows point to where the wire has cut in.) 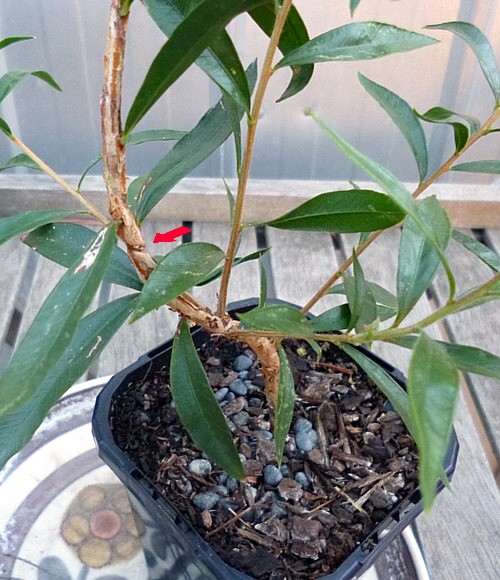 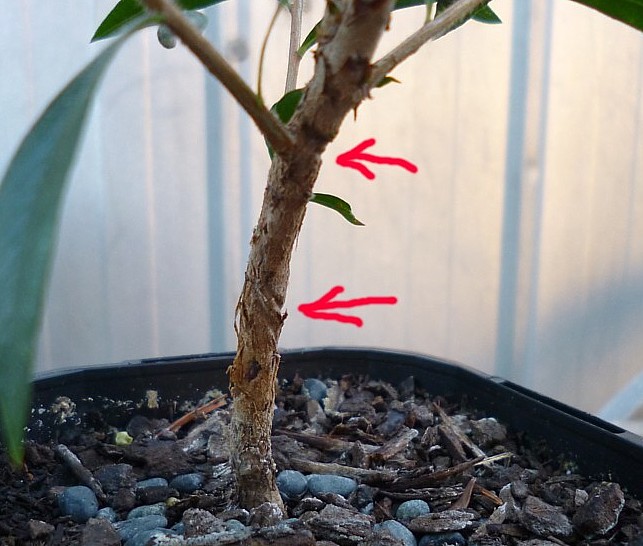 Installing the new wire was comparatively easy, even fun (correct wire, did I mention that?). I only lost one leaf, and I didn't poke myself in the face/eye with the wire even once. I feel quite proud of myself.
Next it was time for styling! 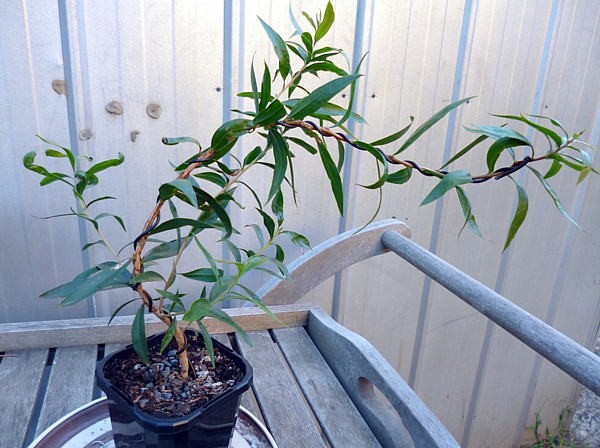 I have to admit, I really felt like I had no idea what I was doing from that point on. It's one thing to read blog posts or watch videos on styling, and nod sagely and say, "ah, I see what you did there." It's an entirely different thing to sit in front of a blank canvas and try to create a work of art from it. Especially when that work of art has a mind of its own and could turn out completely different from what you see in your mind's eye. Or won't bend the way you want it to without damaging it. And especially when that work of art is something you'll be working on for the rest of your life, and the decisions you make now could drastically affect what you have to work with in the future. (No pressure at all, then!)

Pushing all of that aside, I bravely dove in and did this: 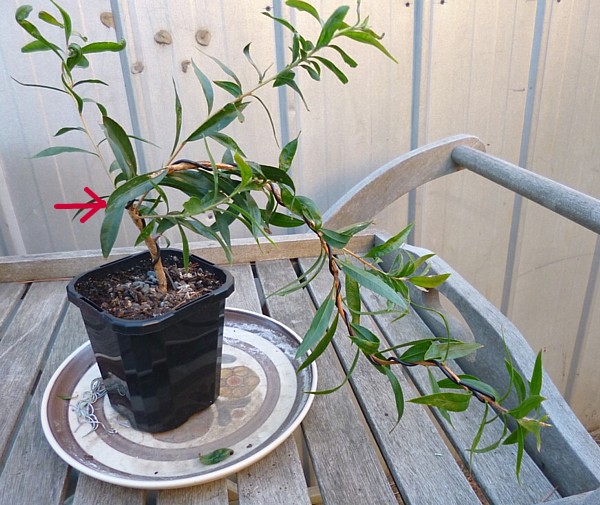 I listened carefully for cracking noises, just like the blogs say, but having no real plan in mind, I kept fiddling with it and had to stop myself from re-positioning it too many times. I'm not completely happy with the outcome, but I didn't want to do any more in case I damaged the tree too much. I gave the trunk a sharper bend (red arrow above) instead of the gentle curve it had before, to give it a more dramatic story. I angled the rest of the trunk downwards, with some 3-dimensional movement both back-and-forwards, and up-and-down. I should have bought some finer wire as well so I could have styled the smaller branches at the same time. Never mind. It's okay.

Noob Lessons Learned:
3. Have a sketch or at least an idea in mind before you start fiddling with the branches!


FYI - this specimen has had no pruning and no root work done on it yet, so on second thoughts I'm wavering on calling it even anything as prestigious as a 'pre-bonsai'. Perhaps I'll come up with my own terms so I can neatly categorise everything.

Today is just a quick update to tell you about my sweet potato. A few months ago, I saw in Gardening magazine that you can grow your own sweet potatoes from the tuber. So I decided to give it a go. I wish I'd taken photos right from the start, but that's life. One half of the potato didn't take (it went all shrivelly), but the larger half is going spectacularly well. 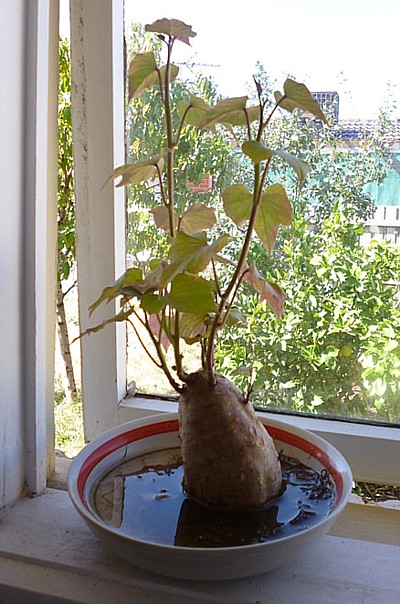 It's been on the kitchen windowsill, where it lapped up the sun, even on the 40oC-plus days. The magazine says that when the shoots reach 20cm, I should snap them off and place them in some water to grow roots. So that I did. 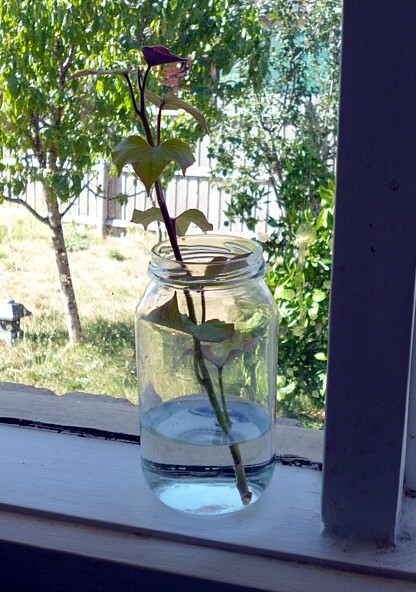 The shoots are different lengths, so hopefully that means we'll have a small but steady supply of sweet potatoes instead of a glut. According to the magazine, I should plant the shoots out when they have well-developed roots and each one should grow 5-6 sweet potatoes. Nature is so cool like that! I'm not sure yet if I'll put them in the veggie garden or pots. Husband and I prepared the bed quite shallow, as we were only planning on growing non-tuberous plants (cucumber, capsicum, etc). We have some pots that may be deep enough, but I'm not sure. I could always try both. That's why it's called an experiment! 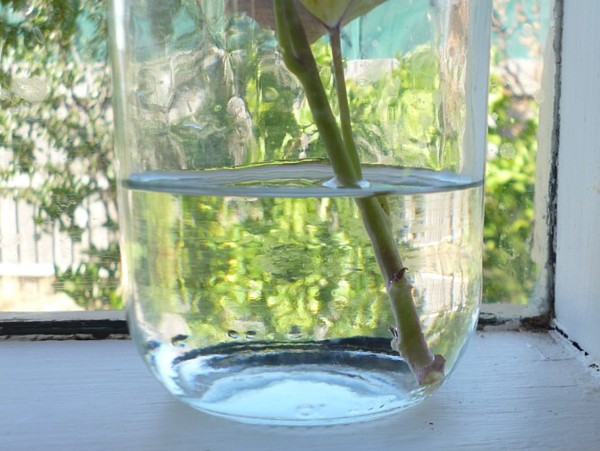