Apparently these are all the rage at the moment amongst the crafty cool kids. But only if they have moss and cute little figurines in them. The kitsch is spreading! I love this one - it's evocative of the Scottish highlands: the little plastic sheep has lost her flock and she's wandering, lost, among the heather... 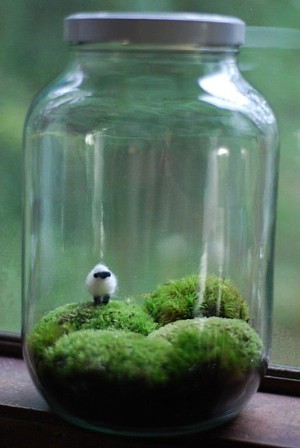 Picture Source.
Let's face it, moss is cool. Look at all the different types. It's like a tiny, pre-historic world.... This one just gives me fluttery feelings in my chest. Apparently the little ceramics were purchased from an Etsy shop. Lovely! At the opposite end of the spectrum: oh, the kitsch! I'm not sure if the red things are berries, or if the faux-Bambie was constipated.... The site that got me all excited about these was Craftzine Blog's Jam Jar Terrarium Tutorial. There's a more comprehensive guide to making different kinds of terrariums terraria at the The Terrarium Man website. You gotta love a man whose tutorial somehow incorporates the legend of King Arthur.

I always thought that I would not be interested in gardening until I was at least 60, but now I'm not so sure!
No comments: