Today I want to tell you about my latest obsession: stuffed toy making! Specifically, I'm back on the old monster-making wagon. A few weeks ago, I started making a stuffed toy as a gift, and the old joy of making funny characters came back to me. I've been completely obsessed with them since then! This is the dino that started it all off:

It's a knitted stegosaurus using this pattern from Ravelry. Obviously it's not finished yet! But I've almost finished the main piece: the head / body / tail section. The humped back and head make ingenious use of short rows for their shaping. Can you believe that the whole head is technically just one row?? I used short rows for a small project once before, but never really thought about their potential until now. The pattern links to a very well-explained tutorial of the wrap and turn technique, which makes it easy. Now all I have to do is make 4 legs, 4 tail spikes and 10 back plates, and I'm done. Lucky I still have plenty of time!

This burst of excitement led me on to the more selfish wish to make more toys for my own collection. You know the kind of creative urge where you can't wait til your lunch break so you can rush down to your Local Yarn Store and buy some yarn and a hook and get cracking? (There are 3 wool/craft shops within a 3-block radius of my work; I am truly blessed! Though many would say it's very unfortunate for my bank account...)

I'm eternally grateful for Ravelry as well, for allowing me to choose a pattern and find out what materials I needed all online, without having to go home and check my pattern books. Instant gratification! That's what happened when I decided on the spur of the moment to start this project: 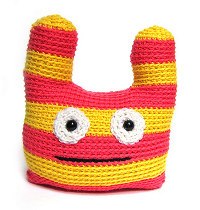 Sorry, this is a photo of a completed one I borrowed from the internet. Mine is going to be orange and pink. The pattern is Mixtro the Monster from Stacey Trock designs. He's going to be so adorable! But yet already I was thinking ahead - to future monsters! I was starting to get interested in designing my own again. When I say "designing", in the past it was more like "making a blobby shape and adding blobby bits wherever I feel like it". The monsters I made in the past had that ... ahem ... special charm that only comes from making it up as you go along. These were some of my first monster-making attempts. I made these in 2007-2008: 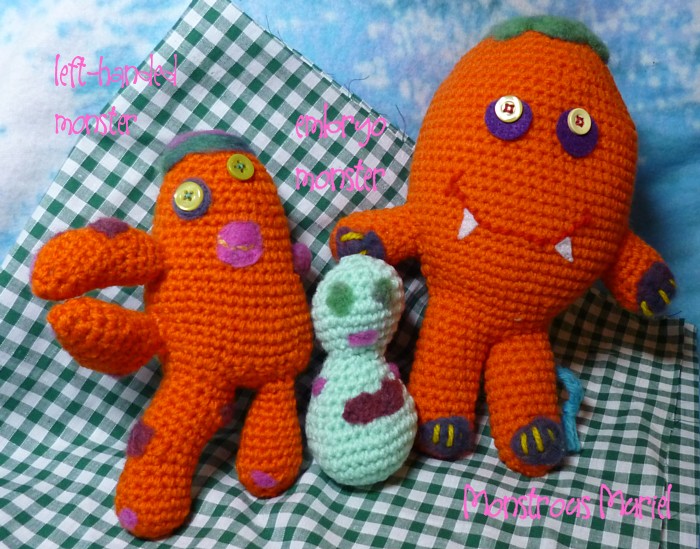 the Left-Handed Monster (L); Peanut Monster (C); Monstrous Muriel (R).
Apparently I had a thing for orange at the time! I remember that I planned to make a whole family of monsters, and write zines with their life stories. To wit - I have three unfinished monsters from that time. Still in their project bags (or cocoons??) waiting to be finished (or born??). I can see that I was starting to branch out a little more - experimenting with embellishments and knitting as well as crochet. I have renewed motivation to finish them now, as well. 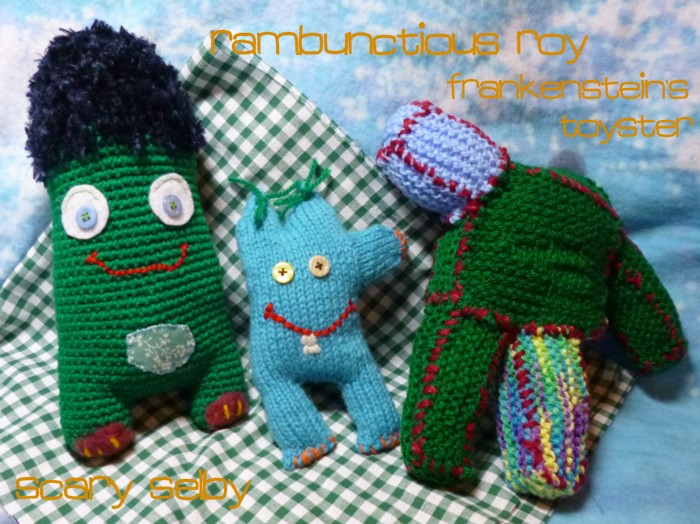 Scary Selby (L); Rambunctious Roy (C); Frankenstein's Toyster(R)
I remember hating Scary Selby's top-of-head / hair and wanting to rip and re-do it, but now I really like it! I don't even think he needs arms - he's perfect the way he is! So I declare him finished. Rambunctious Roy just needs his second arm knitted. Thank goodness I wrote notes as I went along for the first one, so it shouldn't be too hard to recreate. Even if they're uneven, it doesn't matter. He's a monster! Frankenstein's Toyster just needs a head and some embellishments.

I decided yesterday to find some information or a book on designing your own amigurumi. I have to confess, a part of me wanted to make monsters more like the cute ones on Ravelry and less like the ...ahem... 'special' ones I was making 5 years ago. Maybe I've been unduly influenced by Pinterest, where everything is perfect. Hm, I'll think about that later! I started with looking at the designer of the pattern I'm working at the moment (Mixtro the Monster). I was impressed with how well-written and illustrated the pattern was. It turns out she has a Craftsy class on, not just designing amigurumi in general, but specifically monsters! 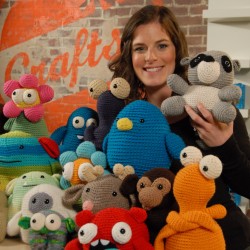 Figuring it was meant to be, and that the cost was probably no more than I was planning to spend on book/s anyway, I signed up post-haste. I have to admit, I'd already heard of Craftsy when it first started, and at the time I was a bit dismissive of it. I thought, why pay for tutorial videos when I can get them for free on YouTube? But I was impressed by their setup. The videos are high-quality and very comprehensive, and there are supporting PDFs that you can download and print out. There's a chat room where students can get help from the teacher and from each other, and a section to show off your finished projects. Best of all the class never expires, so you have access to it all permanently. I watched the intro video last night, and I'm really excited to get to the rest!

There's another reason why I'm so interested in toy-making at the moment. For now it's a secret, but it's a project that I'll hopefully be able to start in a few weeks. Stay tuned for updates!