I vowed that I would not start a new project until I had finished a current one, so I chose the one I could finish the soonest, and pushed on through. It was surprisingly quick to finish once I started doing the decreasing at the top.
And here it is! I present to you: The Baby Fruit Hat!

Oh, he is divine! 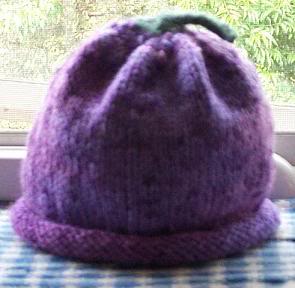 Even better from this side! 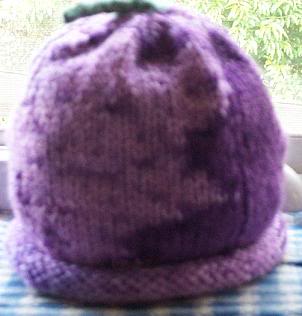 And a lascivious detail, just for you! 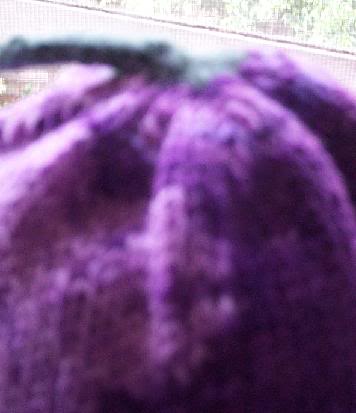 Yummy!
Now, what will I start next??? 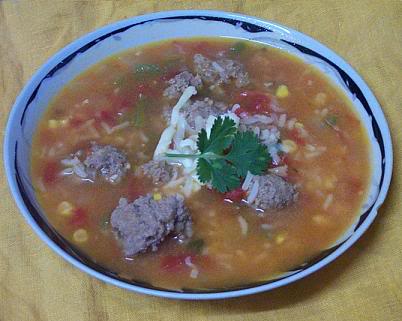 Here is the Mexican Meatball Soup I made yesterday. I love this stuff so much!
With tablespoon of love, and a pound of sausage mince, and a large slop of Habanero Sauce ...

I'm going to be eating nothing but soup for the next week, and I don't care!

When I found out one of my friends was having a baby, I got all excited, and my first thought was:
KNIT!! Imagine all the baby clothes I can knit!! Ooooh! I don't really like babies, but I LOVE knitting!

So I got out some wool I had been saving for a hat for myself, and started knitting a hat for little Sparky: 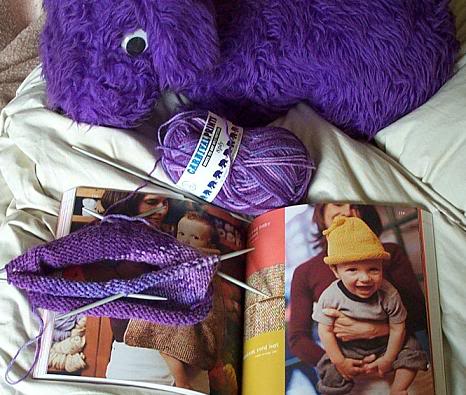 I started with the Umbilical Hat from Stitch 'n' Bitch and I'm going to turn it into something similar to the Apple Hat [link defunct] from Knitting about. It'll probably end up being some kind of giant grape.
I've never used variegated wool before, but I'm really liking it.


But then, on the way to work yesterday afternoon, I had an urge to knit stronger than I've ever had before. It was so strong that I veered uncontrollably into Clegs as I was walking down the street. I couldn't help it. I knew I'd be late for work, but I just couldn't stop myself. Not only did I buy a pattern book and the wool, but I bought some needles too. I decided to make the Baby Hoodie in blue. This is how much I've done since last night: 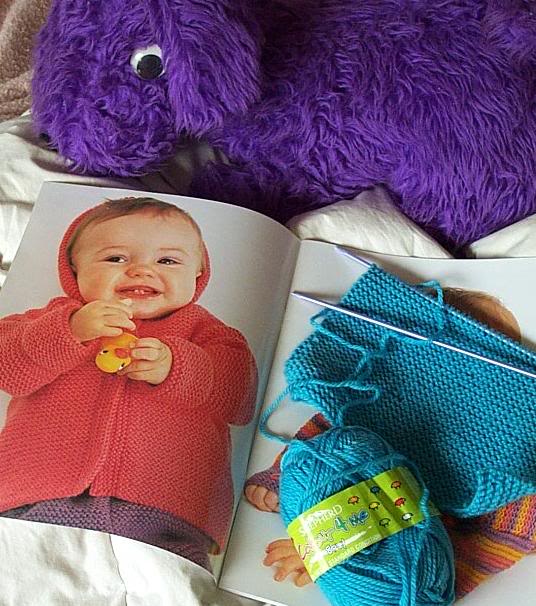 There have already been various jokes, e.g. "Here's a picture of the baby I'm making!" (I had a couple of drinks last night, okay?)

The problem is, I've over-subscribed. I've got to finish the Top Secret Project (75%) by Saturday, and I have my Lacy Scarf (25%) to do, not to mention my cardigan and all the other stuff.
At least Sparky's things don't have to be ready for another 6 months. But they're the ones I want to work on right now!

I'm relating to this blog [link defunct] right now, which speculates on why people are so obsessed with knitting. I'm especially relating to the escapism bit. Hmmm.

Guess what people? I've started knitting again.
I've decided to give you a sneak preview of the Top Secret Project, just to get you all going: 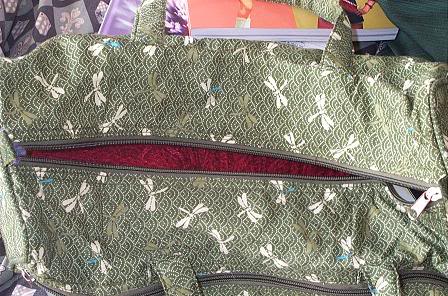 Ooooh! I can just hear the gasps of excitement...

Plus, as a bonus, I thought I'd include a picture of my flatmate's cat, but she was
being unco-operative, as usual. For some reason she likes to stick her head through
the railings on the stairs. Must have been a French aristocrat in a past life.
Still kinda cute though. 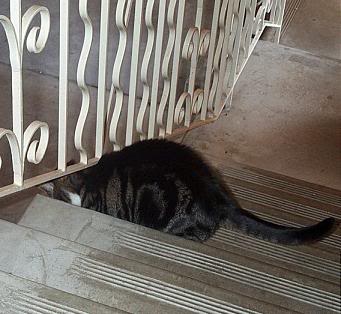 "No photos, please. I'm too busy to
eat your face off right now."

After about a year (seriously) of procrastinating, I finally did it. I borrowed Montse Stanley's The Handknitter's Handbook from the library. Now, this is a book I'd been reading about for years. Everyone was saying that it was the best book on knitting ever produced. I knew that one day I would finally have to bite the bullet, step up and read it. Move into the big time. It really came about as an accident as it slid through the chute into the check-in room at my library. But, by a fateful coincidence, I felt I was ready.

A number of misconceptions were blown away immediately. I always thought that Montse Stanley was a man (well, it does sound kind of masculine, doesn't it?) I'd always thought it interesting that what is generally considered to be the best handbook on knitting ever written was made by a man, and I was looking forward to getting his perspective and seeing if it was any different to the ones I'd read before. And, I have to admit, there was a little bit of daydreaming about 'him' sitting by the fire with a glass of whiskey, knitting away on a cold night. So I was a little shocked to find that he (she) was a woman!

Secondly, I'd gotten the impression that Montse Stanley was a bit like the Hitler of knitting. The Knitting Nazi, if you will. Perhaps the other writers who had written about her work had mistaken 'authoritative' and 'knowledgeable' for 'stern' and 'inflexible'. For a book of knitting techniques, I actually found it quite enjoyable. For example:

"When it comes to starting or finishing a piece of knitting, it is very tempting to learn one method and then stick to it whatever the circumstances. Many knitters actually boast of ALWAYS using such-and-such. How utterly boring! What would you think of a cook who ALWAYS starts with bringing water to the boil and ALWAYS ends by adding a knob of butter?"
-- Page 62.

(Okay, so it's a bit like university-professor humour, but I think it's quite cute.)

Each technique is accompanied by illustrations which are actually detailed enough for you to understand what the technique is, and how it will look. There is also a blurb saying in what situations it could be used. The illustrations are the clearest in any book on knitting I've ever read.

The colour plates showing garments she has designed using some of the techniques are placed in the appropriate parts of the book, so you don't have to flip over 50 pages every time she refers to them!
I'm glad there aren't any patterns or instructions for making whole garments. That might sound a bit odd, but I like that she's just given the reader the choices, and lets them make their own decision on what to create. She goes through the basics, but then moves onto so much more.

I didn't mean for this to becomes a book review, but I've decided - I must own this book! I just can't afford to photocopy all the pages that I want from it:

I say Hmph! to your Stitch n Bitch! Before I read Montse Stanley's book, I thought there were only 3 or 4 ways of casting on. She has over 40!! 20 ways of casting off, and about 14 different selvedges, all illustrated as to exactly how they will look. That's what you want from a knitting handbook!
No comments: 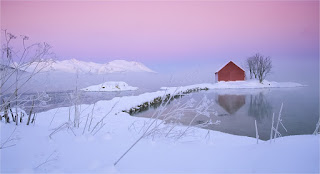 is what I need right now. I think I'm in a bit of trouble.
I have 15 days to go, and I have not worked on the present
for weeks. I just cannot force myself to knit in hot weather.
I don't know what it is. It just feels wrong. Holding the
wool makes me feel hot and I feel like I'm getting it all
grimy.

Even buying a new ruler to keep in my knitting bag so I can
measure how long the thing is has not encouraged me. I haven't
even taken the ruler out of its packet and put it in the bag
yet. *sighs*

Thankfully it's going to be nice and cold on Thursday, so I
can get started again then.
No comments:

A patterned vest form a random website I didn't bother to note down. 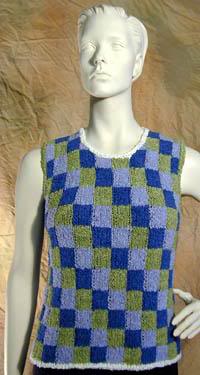 I wish I had the skills and patience to make a really cool argyle vest.
At least you wouldn't have to fart-arse around with sleeves.


Top Secret Project Status: still 40%.
I just don't feel like knitting in hot weather. I really need it to cool down soon, or else I might not get it finished in time!!