Today's post is a bit more personal than normal, and it's been hard to write, but I feel it's important.

My job finished up just before Easter, and since then I've been working on my art project. I was excited to have unlimited time to work on it, and was feeling confident that I'd finish on time and everything would go swimmingly. I was having ideas for new pieces and tucked them away in my brain for later. I even started on one, but just a little bit here and there, knowing I'd have plenty of time later.

Then I got some news that changed everything. An artist that I admired and knew a little had died. She was only a few years older than me and her name was Natalie Uhing. Her art was exuberant, playful and colourful with a dark twist. You can see much of it on her Instagram here. I had been following her long enough to see the changes in her style and influences. When she started a mail art subscription just over a year ago, sending a beautifully decorated letter once a month, I signed up straight away. Each letter told a story from her life, of travel and adventures and encounters with people, all written in the most beautiful calligraphic hand. I feel lucky to have every letter she produced. 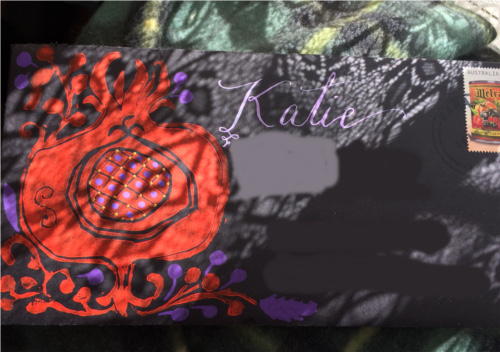 Even though I felt I came to know Nat through her letters, as I mentioned, I only knew her slightly. I never met her "in real life", only exchanging a few messages through Instagram and Patreon. It's hard to describe a friendship with someone you've never met. The internet hasn't been around long enough for there to be words for that. Even still, acquaintance is probably the best word. She did mention once that she'd never been to Melbourne, and if she did visit one day, it would be great to meet up. I was excited at the prospect, but it will never happen now.

I don't mean for this blog post to be depressing or to garner pity. Nat was a happy, curious, passionate person from all accounts, and that's what should be remembered about her. Her art will continue to inspire me, even though the person who created it is gone. It's also driven home to me that we don't have unlimited time left. Even if I'm only half-way through my life, that's still not very long. 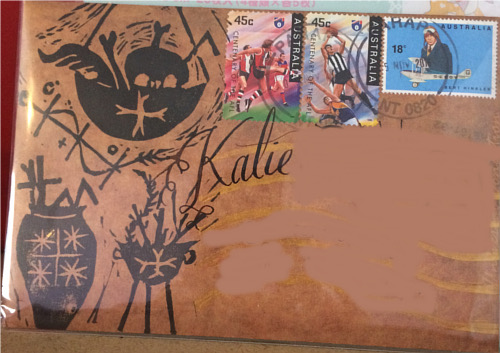 Since hearing of Nat's death, I've had a great sense of what the Germans call torschlusspanik. Literally meaning "gate-closing panic", it's come to signify the fear that life is passing you by. If you don't act now to do the things you want to do, you might never get the chance. None of the doubts and insecurities I have about my art and writing seem to matter anymore in the face of this feeling. Of course, I still have my anxieties, and I still let them hold me back -- it's only been a few weeks, after all, to get used to this new way of living -- but I try to overcome them and create anyway. There's no better way to say it than Nat did herself on the tagline of her blog:


Express yourself. It is later than you think. 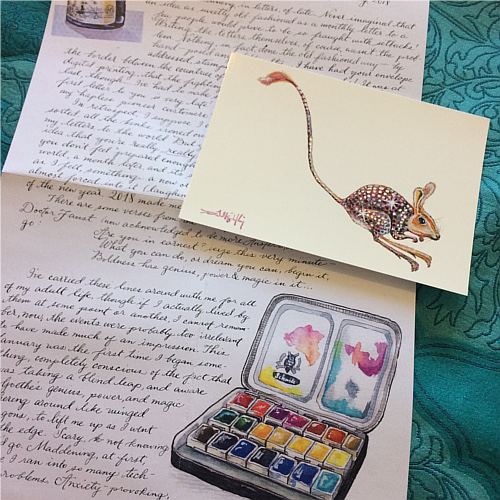 As always, I try to avoid spoilers,
but you may want to see the movie first before reading this review! 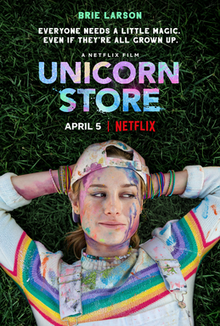 Unicorn Store is a 2017 independent movie starring and directed by Brie Larson. Kit (Brie Larson) is an art student who has failed art school and finds herself living in her parents' basement. Her childlike style with rainbow-coloured clothes and self-made beaded necklaces is out of step with everyone around her. Her parents (Joan Cusack and Bradley Whitford), despite being youth counsellors, have the effect of making her feel even worse. Depressed by this stereotypical example of failing at life, she joins a temp agency and gets a job at a marketing firm. Clearly, she doesn't belong there.

One day at work she receives a mysterious and exciting invitation to visit 'The Store'. At the store, the salesperson (Samuel L. Jackson) tells her that if she can prove herself by creating the right habitat for it to live in, then she can purchase a unicorn. Kit immediately sets to work to build a stable in her backyard, with the help of hardware store clerk Virgil (Mamoudou Athie). Meanwhile, at work she's tasked with creating an advertising campaign for a vacuum cleaner, while being low-key harrassed by her boss, and putting up with hostile colleagues.

The big question is -- is Kit having a mental breakdown, or do unicorns really exist?

Unicorn Store is full of contrasts. The drab, monotone atmosphere of the office is the antithesis of Kit's bright, colourful art and her excitement at the prospect of owning a unicorn. Her blossoming friendship with Virgil is so different from that with her parents, who unwittingly neglect her while living for the troubled youths who attend their camp. The movie is whimsical and fun, and I loved it. I have to admit, I saw a lot of myself in Kit -- whose creativity is rejected and is searching for meaning in life. I was clutching at my blanket in anticipation of how it would end, but thankfully it was satisfying. Unicorn Store teaches us that we should be ourselves, and we'll find a place to fit in if we follow our hearts.

Would I watch it again? Yes, several times!

March was still quite hot at the beginning, but Autumn finally started to kick in towards the end. I've been waiting for the leaves to turn, and they finally have. It's been cool enough to start using the oven again, and cook some hearty meals.

What I've been growing ...
I grew potatoes, which was quite exciting. I was going to write a separate post about this a few weeks ago, but I couldn't find the photos from the beginning of the process -- letting the 'eyes' grow on the potatoes and planting them. It didn't feel complete without them, but I didn't want to go with not mentioning it at all. Here are my 4 potato plants at the nearly-ready-for-digging-up stage: 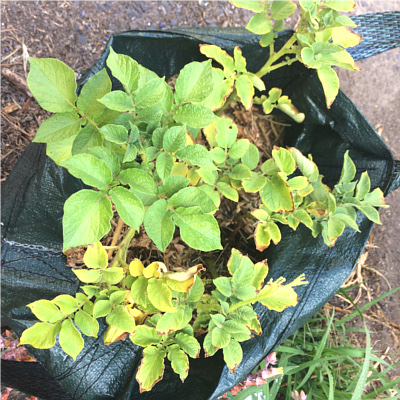 Here is my harvest. I planted 4 full-size potatoes, and put together I'd say these babies equal about the same. All it cost me was half a bag of compost and a couple of handfuls of straw. I didn't pay enough attention to regularly adding more compost and letting the plants grow taller (and therefore grow more spuds underground). I'll remember that for next year. 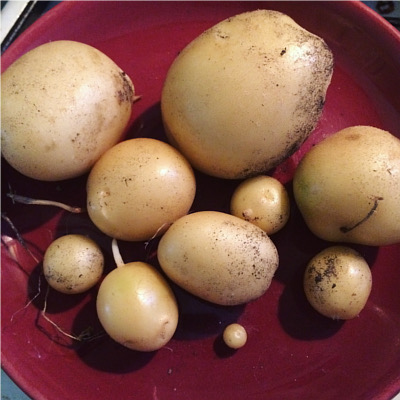 What I've been cooking ...
Husband and I re-watched the Harry Potter movies, and on the spur of the moment we decided to have a Harry Potter feast day. For breakfast we had a cooked breakfast with sausages, eggs and mushrooms: 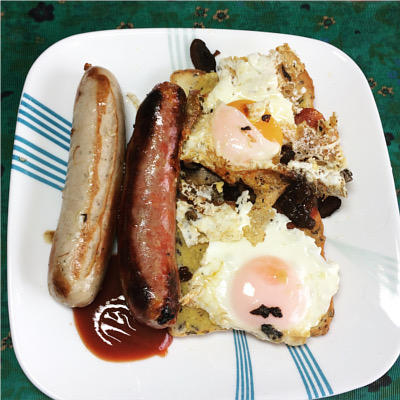 We were so full from breakfast that we weren't hungry for lunch (which was going to be Mrs. Weasley's corned beef sandwiches). I was also going to make pumpkin pasties and treacle tart, but we wouldn't have been able to eat them! So we skipped straight to dinner: a roast beef and veggies complete with Yorkshire pudding and gravy!: 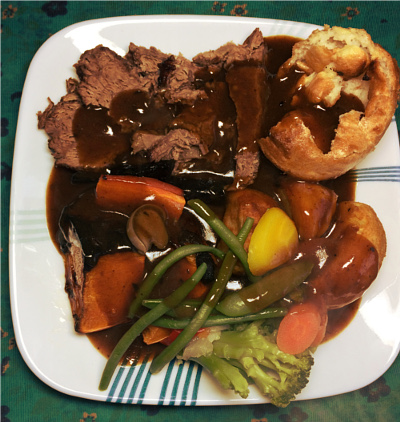 I had some Bertie Bott's Every Flavour Beans from a trip to the Shop of Requirement (see my post on my first visit there here!), and it was time to try them! Yes, they really are every flavour! I wrote about them a bit more on my Instagram. 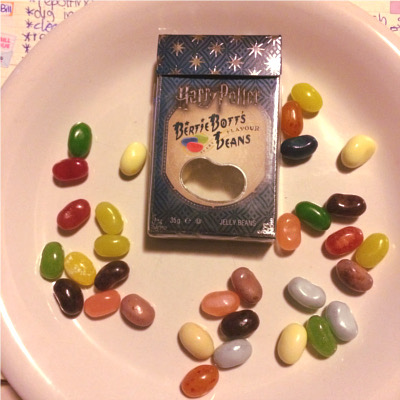 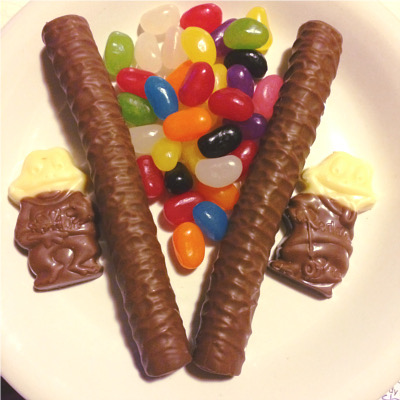 What I've been potting ...
I love re-potting plants. It's one of my favourite activities. I went to the local nursery and splashed out on lots and lots of pots, and a couple of new plant friends. Then I had some mammoth re-potting sessions. I'm still not done yet though. I had a wealth of cuttings from my fuchsia and succulents to pot up, and I'm still not done yet. I've been trying to re-use materials more -- such as bits from a disposable coffee cup to line the bottom of the pots. 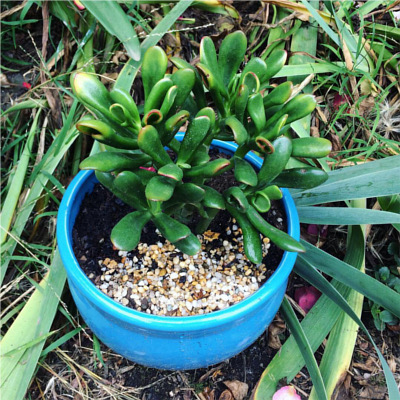 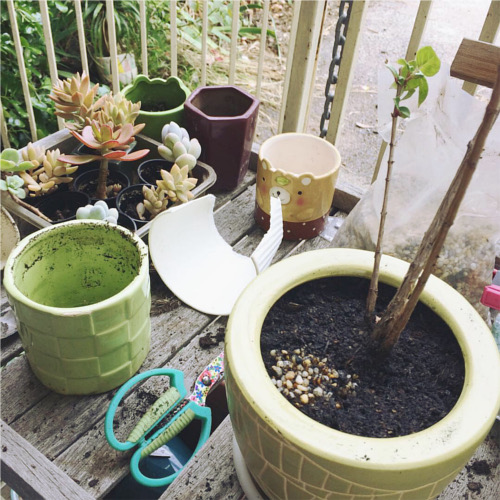 What I've been making ...
I started a new craft project but I can't reveal anything about it yet as it's a gift for a friend. So you'll have to wait until next month to find out what it is!

Selections from Instagram
The place where I'm working isn't that picturesque, but I did find this stunning display of Autumn leaves a few days ago: 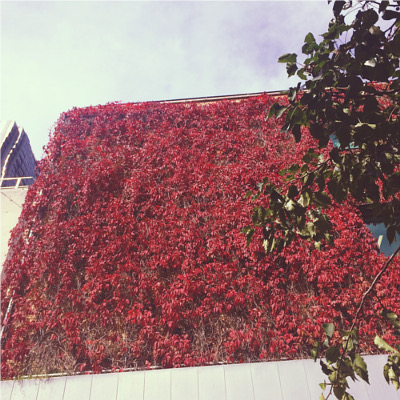 Sharick 'helping' me to fold my clothes: 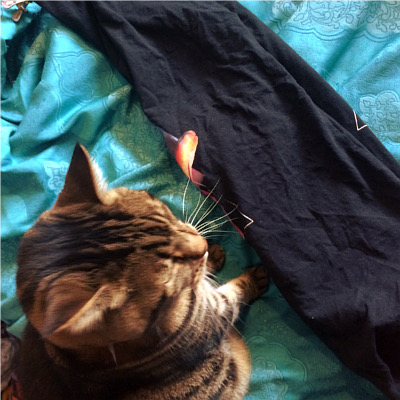