All the authors of the American blogs I read (even the Swedish one!) seem to be away on holiday at the moment. I'm so jealous! Anyway, I've decided that the Knitting Goddess is right: ponchos are ugly. According to The Mighty Boosh, "It's impossible to be unhappy in a poncho", but I don't think they've ever tried knitting one! (I love that show!)

So I'm going to rip mine. Not the finished one that I never wear, but the half-made one that I haven't touched since last winter. The one I've never mentioned because I've become so disillusioned with it. It seems I don't learn from my mistakes. Just because you design something and you are really proud of the design and you think it would look great on somebody, doesn't mean you have to go ahead and spend six months of your life making it. Besides, it was getting way out of hand. I had to put half of it on holders because there were just too many stitches to fit on the needles, even when I squished them up cruelly. After doing a few rows that way and realising how much longer it would take, that was the point where I decided to give it a rest for a while and see how I felt about it in a few weeks. A few months later I looked at it again and didn't even complete one stitch. Six months later (!) I've been spurred into action. Well, not actual action, but deciding to do something, which for those of you who know me, is a momentous event. I'm almost even excited about it, because I'll have more than enough wool to make a natty vest. Won't that be great?

Speaking of ripping, remember the Jumper From Hell? Well, here is the finished result: 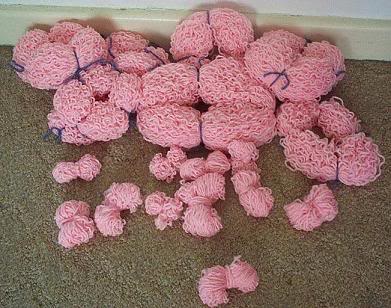 Before Dying*: Yes, that is the amount of wool used to make a (crazily large) jumper. So much work, and so little to show for it. O, the humanity! 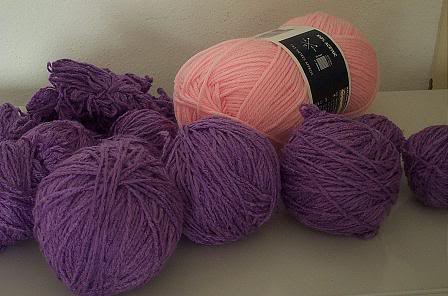 After Dying*: Much prettier. Not all of the skeins would fit in the pot, so two of them are still pink. You never know when I might need them. Dyeing the wool had a really interesting effect on it. It's thinner, and the texture is now much more harsh and cottony. I've used it to make a test piece for designing some Hand Covers. (More on those at a later date.)

I know it's been a while since I posted on anything, let alone knitting. My obsessive need to knit has slowed down a bit over the last few weeks, but not enough to resist pressing my hands together and begging a poor girl at work to "pleeeeze, let me have a go!" She gave me a funny look, clasped her knitting reflexively to her bosom, and said very politely that it was her baby and she was a bit reluctant to let anyone else work on it. Fair enough. The manic gleam in my eye probably put her off, and the idea of letting someone else "have a go" at your knitting is probably a bit weird.

I'm very excited because I finished the first piece of my Brontosaurus Toy! Yay! I only have to knit another piece just as long and excruciating as the first, and then I'll be about 1/8 of the way through it! Bronto is posing here with a few of his little friends. 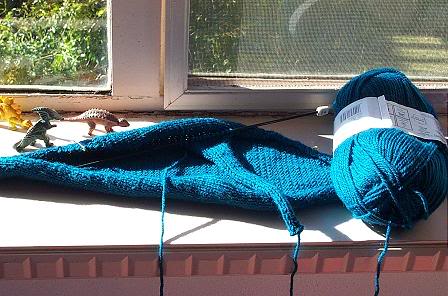 I've also nearly finished my Fluffy Dice. I will have to buy some stuffing soon! It'll be a bugger to store, but it'll come in handy for when I finish the dinosaur. 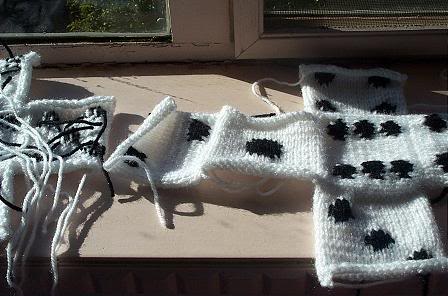 See their guts, spilled out all over my window sill! Grisly.


Some random stuff follows.
This is a really good article, the link to which I stole shamelessly from another blog: Fashion on a Shoestring.

I love this quote. It could apply to anything, not just knitting.

"If at first you don't succeed, failure may be your style."
-- Quentin Crisp.

I have started a pair of knitted "fluffy" dice (they are actually just "slightly fuzzy"!). It's my first try at stranded or picture knitting, and it will be my first try at I-cord when it gets to the stage where I make a cord to join them together. At first, the stranded knitting was driving me stark, raving bonkers! but I'm starting to get the hang of it now and it's not taking as long to do each square. The only bit I'm still having trouble with is, when changing colour, winding the two strands around each other so as not to leave any holes. I seem to end up winding them around twice - and still having a hole!

Oh, and according to Stich 'n' Bitch, "you should know that the edges of your colour blocks are probably going to look crappy." Great!!

I will probably have to block the pieces at the end because they're turning out rectangular, not square, but that's not too hard. I think they might turn out pretty cool. If I do say so myself!

I've also done about 30 more rows on my Brontosaurus Toy. I did it while I was watching The Magnificent Seven :) So I'm about 3/4 of the way through the first piece now. I'll never get the bloody thing finished!!
No comments:

Today I finished my Hippie Hat! It's a little tight, but I can stretch it easily to fit. Here it is: 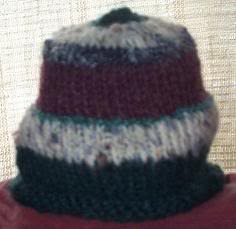 Later, I'm going to dye the wool from the Jumper from Hell and see what happens.
No comments:

I just saw one of those ads for Campbell's soup, where, as the person is eating, a scarf or a hat or a jumper automatically builds itself up on their body in the space of 30 seconds. It's obviously calculated to appeal to all the people who've recently become interested in knitting, but my mouth can't help watering - and not at the soup! It was at that luscious, thick red wool, and the way it flitted and flickered to create a beautiful garment in a matter of seconds. The soup-eater ends up happy and warm and well-dressed. It's the stuff that dreams are made of.

I'm a bit worried about my Hippie Hat. Despite adding 4 stitches to the circumference, it still seems to be too small. I'm not ripping the damn thing again! Then again, it's a bit difficult to stretch when it's on double-pointed needles, so perhaps when it's off the needles it'll be all right.

I started another patch for my stitch sampler bedspread the other day as well, and it's nearly big enough to add to the finished pile.

No more work on the Brontosaurus toy, or anything else at the moment.

Designs for the knitted dice have begun, but not to the stage where I can add them to my Works In Progress page. There are a couple of new projects boiling away in the dark, humid, murky depths of my brain, but I won't reveal them quite yet.
No comments:

Tags: 2004, design-y, headwear, in progress, in the pipeline, knitting, plush

I am revealing my atrocious knitting shame! My first and only jumper, which I made two years ago. Why on earth did I think I'd ever wear a square-necked, short-sleeved jumper?? Especially in that awful shade of pink?!? 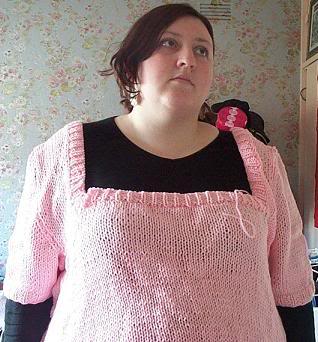 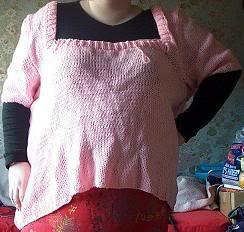 It's been sitting at the back of my knitting shelf, hidden away behind other half-finished projects for all that time, testimony to my inadequate knitting skills!

I've made a decision. I'm going to rip up the jumper.

I'm going to come out into the light, no longer ashamed of my failed projects. I'm going to wind the yarn from the jumper and the 5 spare balls that I never needed into hanks and dye them purple. I'm going to wipe the slate clean and start again. I'm going to get over my two-year-long fear of making a garment, once and for all!

And I'm going to have beautiful clothes, just like everyone else.

I was sitting on the train yesterday, thinking about fashion (yah, I know, I'm sad). I was thinking in particular about how dice have come back into fashion as accessories and how funny it is that people hang fluffy dice in their cars. I was also thinking about knitting at the time (as it's my current obsession, I'm always thinking about it) and I had the idea of knitting a pair of dice.

I've seen knitted cube-shaped toys, and it doesn't look that hard. All I'd have to do is figure out how to add the dots. I've never done picture knitting before, because I don't believe that galahs and wattle branches belong on jumpers (Jenny Kee has a lot to answer for!) but this could be a good way to experiment with it a little.

*sighs* I really should finish one of my other projects [link defunct] first though.
What is a reasonable number of projects to be working on at once? Excluding abandoned ones, I'd say I'm on 3 or 4 (including one in long-term rehabilitation). That's not really many, is it? A new one wouldn't hurt....
No comments: