Recently I mentioned that I had some old sewing projects kicking around that I was sure would surface when I was moving house. Well, I found them! Five of them. I can't be bothered going into too much detail, so I let the pictures speak for themselves. Heh. 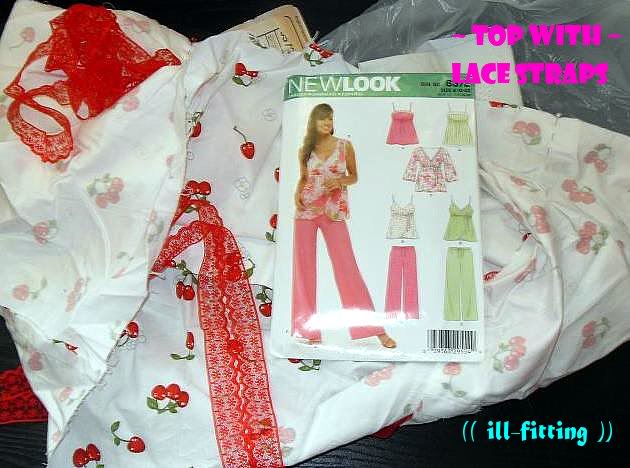 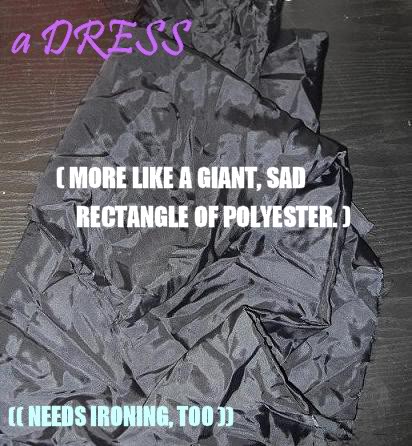 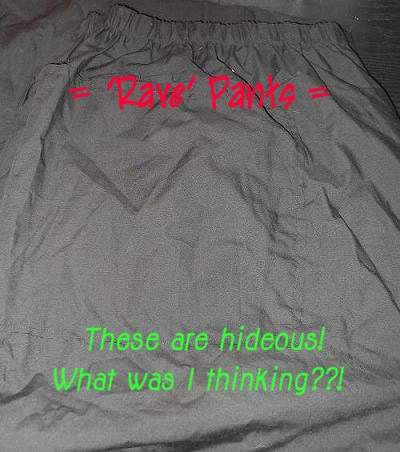 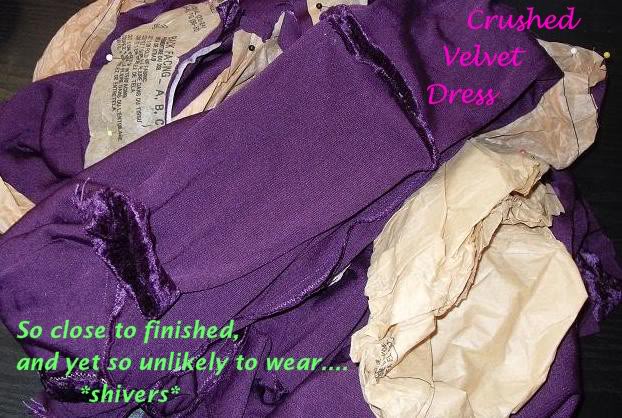 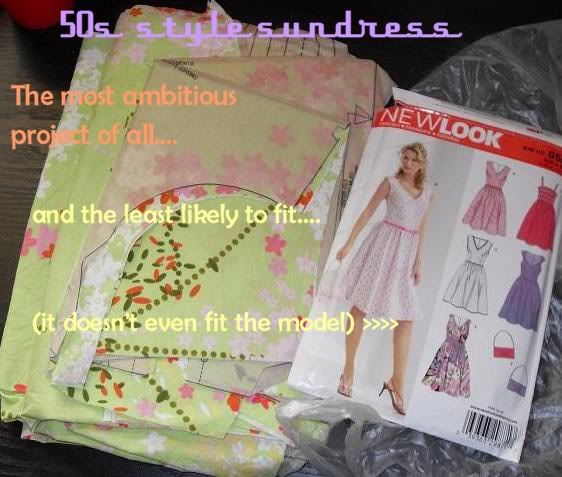 I'll probably ditch most of these projects, but I don't have the brain power to think about them properly at the moment, so I'm delaying making a decision.
No comments:

A little while back I decided that my new bathroom was a bit sparse. It needed something to decorate the window - some kind of curtain or bunting. (I'm completely obsessed with bunting at the moment.) I'm big on light though, and I didn't want to cut out any light coming into the bathroom. What I needed was something transparent to make the bunting out of. At my work we receive lots of reports that we need to take apart and scan. Many of them are spiral bound and they have clear plastic covers. Normally we just chuck them in the bin, but I've been hoarding them for an occasion just such as this! 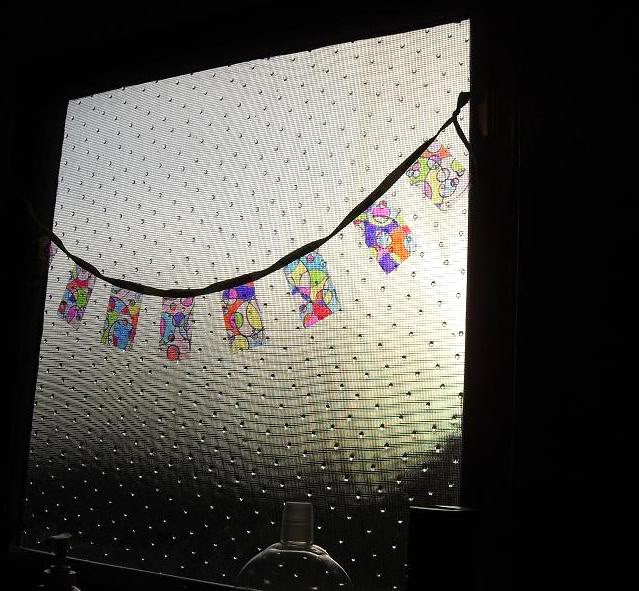 A romantic view at sunset
How did I do it?

I took one of the sheets of plastic and drew lots of circles on it, then coloured it in with permanent markers. It took aaaaaages as I needed to let it dry after doing a small area, or it would smudge. (I ended up doing the colouring-in in between rounds of playing computer games!) Finally after a couple of weeks, it was all coloured in. I then measured the window, and cut enough rectangles to range across the window with gaps in between. I took a piece of ribbon I had lying around in the hobby room, and stapled the rectangles to it. I started in the middle and stapled rectangles alternately on each side until the ribbon was full. Then I tied a simple knot in each end to form a loop and hung it from the nails that keep the window-screen in place. 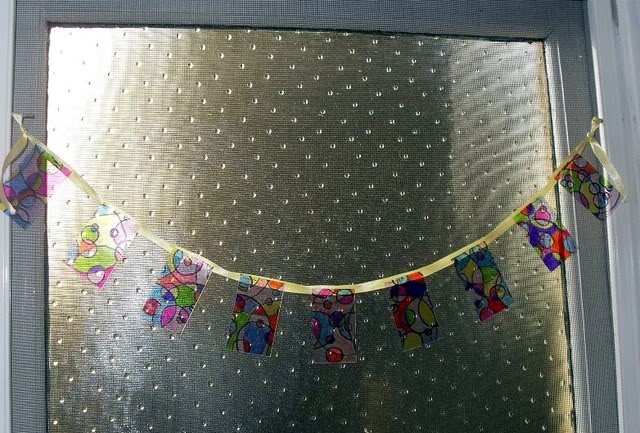 Yellow ribbon? It was really all I had.

I have plenty more sheets of plastic stashed away, and I'm wondering if I can whip up a lightshade for the hobby room. With a simpler pattern this time, I think. ;)
No comments:

I'm so disorganised at the moment that I'm posting Ditzy Tuesday on Wednesday! I've got 5 days off soon, and I can't wait. There's going to be some Serious Crafting happening at Casa del ApartmentCat! I can't promise that my place won't end up looking like this.... 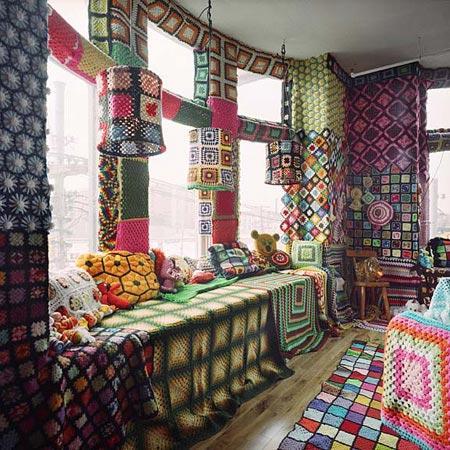 
I've been hungry all day today, so I thought this picture was appropriate.
Mmmm! Last week was a bit of a slow week - I'm still recovering from my cold and feeling tired, so I've mainly been doing Zombie Crafts. Hopefully I might have something to show later this week though.

Not only is this crocheted basket handy, but it would make my life look a little more crafty as well! 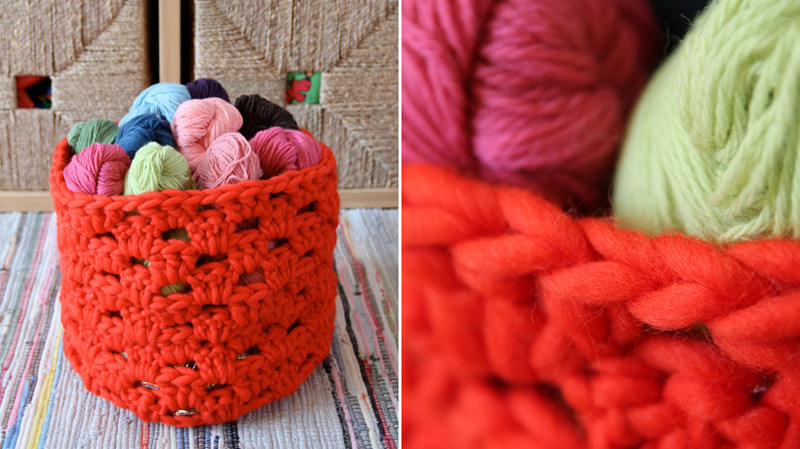 Things I Made and Did

Monday! Hmph! Tonight when I got home from work, I was so determined to do something crafty that I went ahead and got out my sewing machine! I had a few minutes of panic when I couldn't find the foot pedal, but thankfully I remembered seeing a tangle of cords in the bedroom last week and there it was! I'm itching to get into so many sewing projects, but I haven't actually sewn in years, and I started with something simple - some fabric bookmarks!: 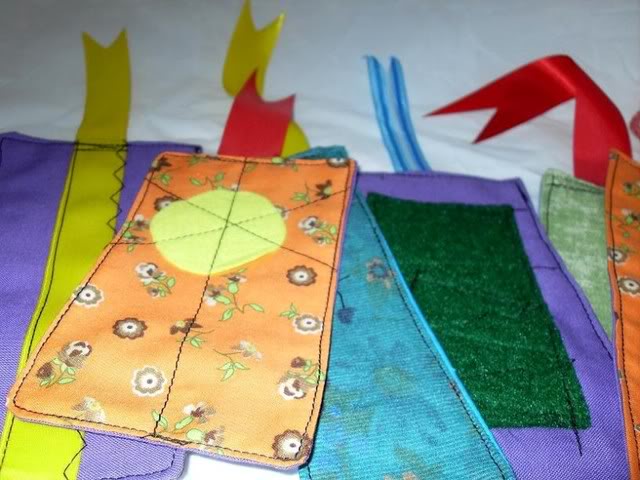 I made them as gifts for my lovely customers. I had a sale the other day! My first in about 4 months, so I'm very chuffed and feeling in the mood to go that extra mile. Although there's one bookmark which is so wonky, I'd feel bad about even giving it away for free! So I'll keep that one for myself. A girl can never have too many bookmarks!

Also, this is something I started about a month ago, but was too lazy busy to take any photos. It's a couch cover. A big project! It's very loosely based on a bedspread I saw in a magazine (it was a while back and I can't remember which one now). I made up the pattern myself, and at first the squares turned out a little bit wonky! See the wrinkles: 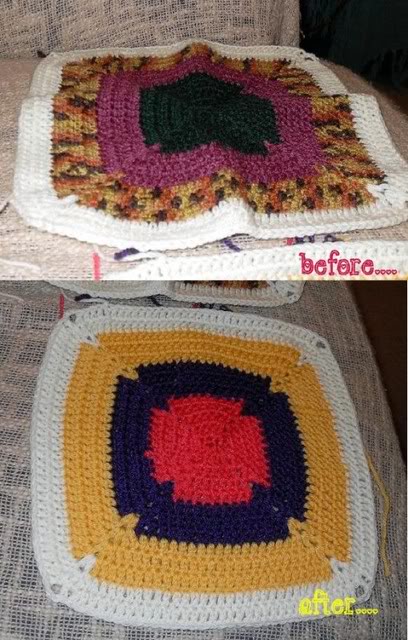 But as you can see from the 'after' picture, I took out a few stitches on each side, and they sit nice and flat now. Here's a pic of two sewn together. I've made 4 1/2 so far. 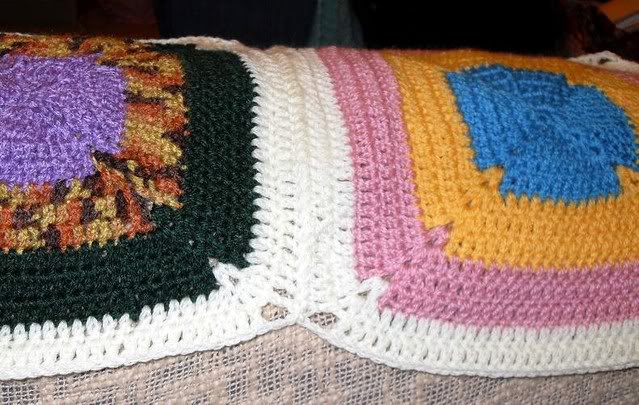 I'm quite prepared for this project to take a year or more. But then - if it was easy, it wouldn't be worth it, would it?
No comments:

Conclusions for March / Actions for April

March was just as uninteresting a month as February was, I'm afraid to say. Out of the four goals I set myself, I only fully achieved one. I'm not very good at taking care of myself when I get sick, and that just makes me sicker. Still learning my lesson on that one. So when it came to anything that involved Moving, my lungs said, "no way!" And when it came to Meditating - I did borrow a book on Mindfulness Meditation from the library, and I did start it, but my fuzzy brain said "no way!" When it came to Creating, I thought about going to see a live show. But then my brain said, "why didn't you wait until next month when the Comedy Festival is on, dolt??!"

The one thing I did do satisfactorily was work on unpacking and organising the hobby room. It's gone from a room where you literally couldn't even walk in the door, to one that's looking semi-functional. Well, maybe one-third-functional at the moment! I got so sick of thinking, "gosh, I'd like to work on ___ project. I need ___ tool to do that but that's still packed!" So frustrating! I was very motivated to work on that. Finally a couple of days ago I found my fabric scissors, which were a big thing I was missing. (Anyone who's ever worked with fabric knows how important a good pair of specialised fabric scissors is.) Now I can start some sewing projects and I'm pretty excited about that.

April is my favourite month of the year because a) my birthday is this month; and b) Autumn is really kicking in and that's my favourite season. Given all of that, I think I'd like to focus slightly more on the fun side - i.e. Creating - this month. Here are my actions for the month of April:

* Go and see a live show; create something inspired by it. (CREATE)
* Finish the book on Mindfulness Meditation and try it at least once. (MEDITATE)
* Go on a picnic/walk/hike. Take some photos along the way. (MOVE / CREATE)
* Finish organising the hobby room. (DE-CLUTTER)
* Finish at least 3 craft projects. (CREATE)