Craft Progress ... Or Lack Of?

I was going to wait until I had finished more stuff before I posted again (procrastination being the better part of my weekend), but I'm having ex-flatmate server problems at the moment, and it seems I'll be losing internet access in a few days, and might not have it back again for up to a week. It's fairly usual for me to not post for a week anyway, but you never know. Someone out there might think I've died or something...

I have a confession to make. In my last post, I said that I had finished the Berry Bonce hat. It wasn't true. I still had the ends to weave in. I'm actually not really ashamed. I don't care one little bit. You see, I've lost my motivation for making things for other people. I just can't get up the motivation to keep on plowing away if it's not me that gets to wear it or use it afterwards! Sure, I have these high-handed notions of making excruciatingly fine and details baby shawls and bootees and jackets, but am I really going to finish them?
I sometimes wonder if the things I make for other people actually get used. Do they think they're too precious to use and they don't want to ruin them? Do they not wear them because they're fugly? Do they (e.g. Boy) wear them out of a sense of loyalty and not wanting to hurt my feelings? I'm just paranoiding again. Sorry. I really have to snap out of that if I want to start selling my works! Here's the Berry Bonce: 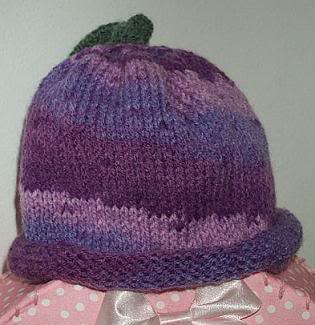 Mmm, yummy!
I now feel like I can start on something else. Will it be the heirloom baby blanket? Or the Elizabeth Zimmermann Baby Surprise Jacket? Or something totally mean and selfish?

I'm well along on the Baby Bum pants: 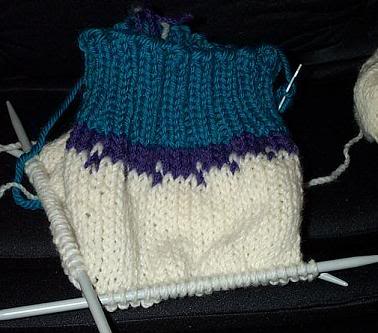 I'm really quite happy with the fair aisle bit just after the ribbing, and the colours. too. I actually managed to find some pure wool in my stash in gorgeous colours that co-ordinate well. I couldn't have asked for more! I don't want to give the darn thing away! I'll probably ruin the end part with the leg-holes though, and then I'll be quite content to give them away. Hmmm, is this why I'm such a bad knitter???

Last but not least, the piece de resistance - I finished the Happy Baby Grassy Feet! 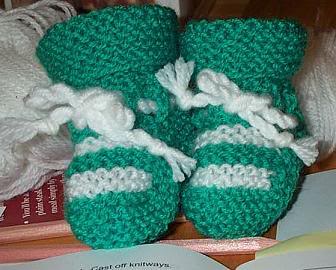 Groovin' in the grass
They turned out much better than I had hoped for. I was really worried about the sewing up, but I just followed the instructions in Elizabeth Zimmermann's book, and they look almost perfect! The cords were a bit of a pain to make. Boy helped me with them - he's a gem! I was hoping to have the rest of the bootees and mittens made by now, but I've found that, not havin much spare time, I'd rather just do whatever I feel like than forcing myself to do something I don't want to do at the time. Ravelry has helped immensely with that actually. Instead of a situation where I'm moaning about the thought of trawling through all my stash for a ball of wool that I thought I remembered I had, I can just look it up online, even from work, note down the location and go straight to it! My motivation to knit and start new projects has been so much higher since I joined. Or got in, I should say. As it's still in beta testing, there are only a limited number of users (first in, first served.) There are over 19,000 people on the waiting list, apparently. I hope they won't have to wait too long.

Enough of wool. Spring is in the air and I'm branching out to new things. On the weekend I went to Polyester and bought some zines: 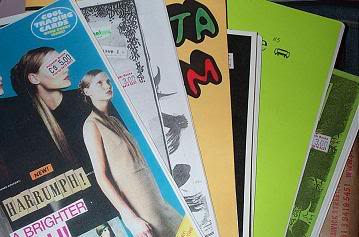 It's pretty much a random selection of stuff that looked appealing. I'm really liking reading them, and learning a lot. I think it's great that people are sharing their personal stories, their writing and art. Speaking of art *sniggers*, here's my second LOLcat: 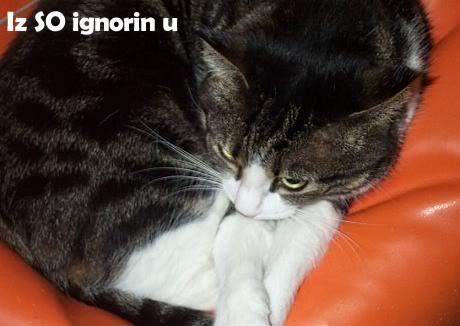 The knack seems to be not in thinking of a funny caption, but actually getting a decent picture of the damned cat!!