I placed my first order with 4 Seasons Seeds recently. There are a large range of seeds on offer, from interesting vegetable varieties to ornamentals, but I was most interested in the 'Trees and Shrubs' section. I spent such a long time perusing the website that in the end I ran out of time and made my order in a hurry. I accidentally ordered Pin Oak instead of Trident Maple. I was saving Pin Oak for a later time as the process of sowing them involves stratification, which sounded a bit too advanced for a noob like me. When the parcel arrived and I saw acorns in it, I didn't know what to think! But I'm embracing it as a chance to learn. 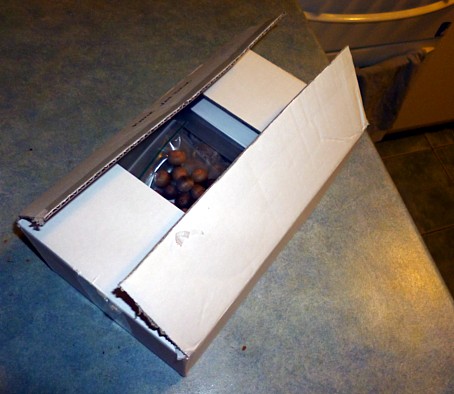 I have to apologise in advance because the photos in this post aren't very aesthetically pleasing (though pictures of peat moss might appeal to some!). 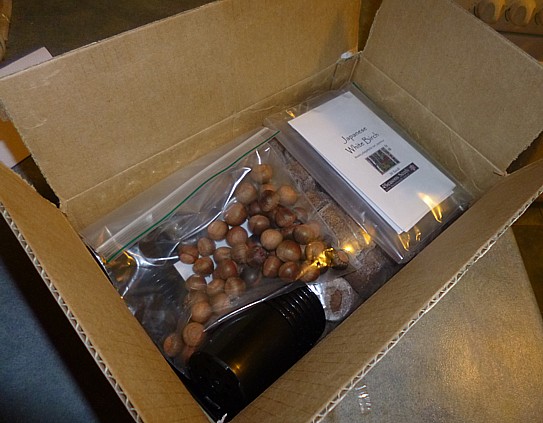 The parcel from 4 Seasons Seeds arrived very fast and was well-packed. The other seeds I ordered were Japanese Birch and False Spirea (also accidental!). The owners had kindly added a free packet of Hungarian Lilac. I also ordered some peat moss pellets and small plastic pots for my propagation operation. 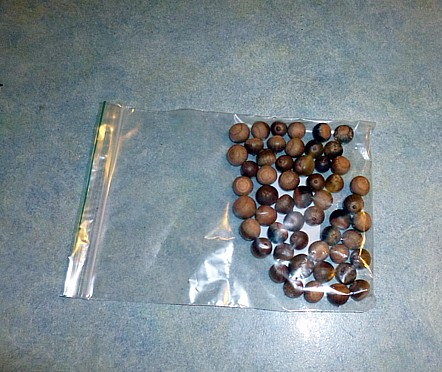 So what is stratification? Thankfully there was a cheatsheet included that explains everything. Because oaks grow in cold climates, they are used to a period of snow and freezing every year. In autumn, the acorns drop to the ground and lie under the snow until spring. In fact, the acorns will not sprout unless they go through this period of cold first. To make the acorns sprout in warmer climates, or out of the proper season, the grower needs to put them in the fridge for at least 30 days, and anywhere up to 90 days. I envisaged our whole fridge filled with little pots of dirt! Thankfully though, the cheatsheet said that all I needed to do was put them in ziplock bags with some moistened peat and put them in the crisper section. 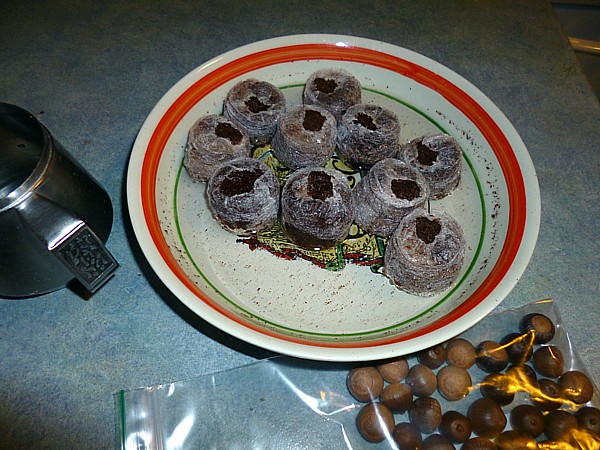 I started out by soaking the peat moss cocoons in water until they were nice and moist and plump. Then I 'planted' an acorn in each one, pushed it down inside and squeezed the top shut. 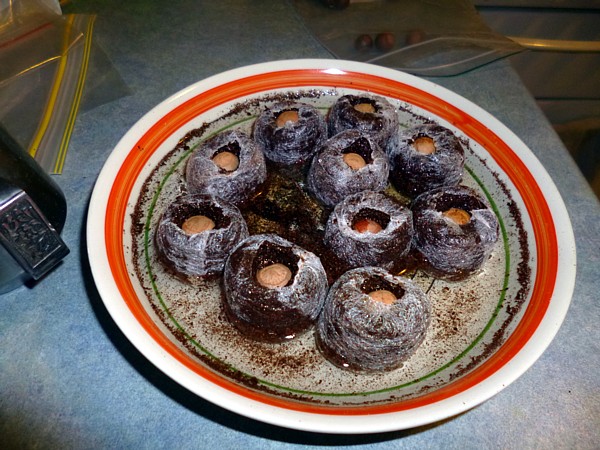 I put 6 cocoons in each plastic bag. Halfway through, it occurred to me that treating them this way might make it very difficult to check if the acorns were germinating or not. So I switched to a different method. I peeled the mesh covering off about 5 peat moss discs and put them in a plastic bag with some water. Then I worked at them with my hands until they were wet all the way through. I put 6 acorns in each bag and squished away until they were well covered with peat moss. It occurred to me at some point that with this method it might be just as difficult to tell if the acorns have germinated, but experimenting is always fun. 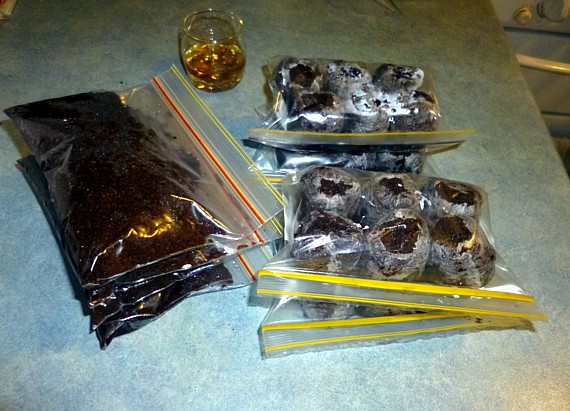 Once I'd done 4 bags that way, I realised that all-up, there were 55 acorns in the 20-acorn bag that I'd purchased. Even assuming that one in two acorns won't germinate, that's a generous amount. After peating up 48 though, I was a bit over it and decided to save the rest for craft supplies. 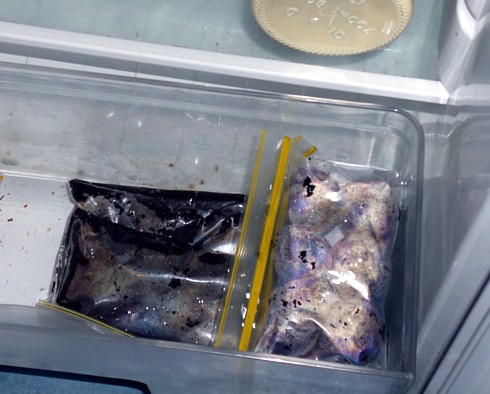 Then into the fridge the baggies went. Now it's just an (im)patient wait to see what happens! 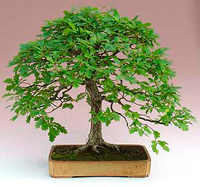 A Visit to Cat Café Melbourne

The first time I heard about cat cafés was when I was in Japan in 2008. Wandering around the Tokyu Hands department store, we just happened to come across the Neko Bukuro ('Cat's House') on the top floor. A place in the city where people can go and relax by playing with adorable cats - surely it's a dream come true! Having a love for all things cute and furry as well as all things Japanese, I was itching to go inside, but Husband in his sage wisdom didn't let me. I'm highly allergic to cats and at the time I had not yet had my allergy injections, nor did I have any hayfever tablets on me. So we passed it by and I vowed to return one day.


▼ Winter and Ruby asleep on the much-loved sheepskin rug. 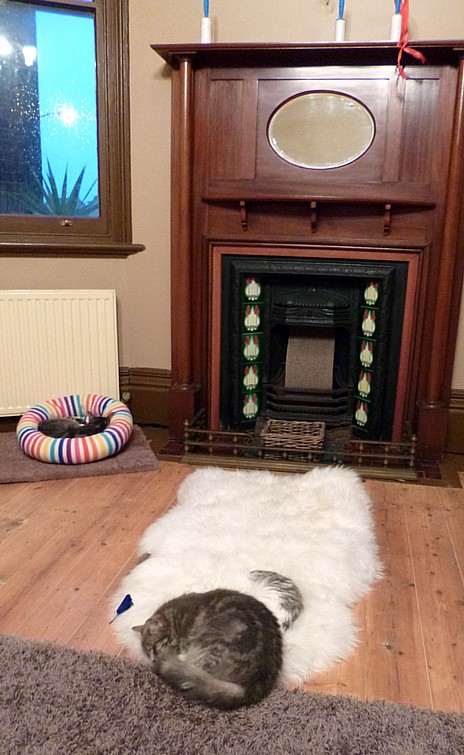 Unfortunately I haven't been able to travel back to that part of the world yet, but I was heartened when I started to hear about Cat Cafés opening up in other parts of the world - China, France, U.S.A., Canada - surely Australia would be next?? When Husband told me last week that a cat café was opening in Melbourne very soon, I became embarrassingly excited and made a booking as quickly as humanly possible! Then it was a very long week until finally the café opened and the day of my booking came.


▼ Something distracts Winter from grooming Ruby. 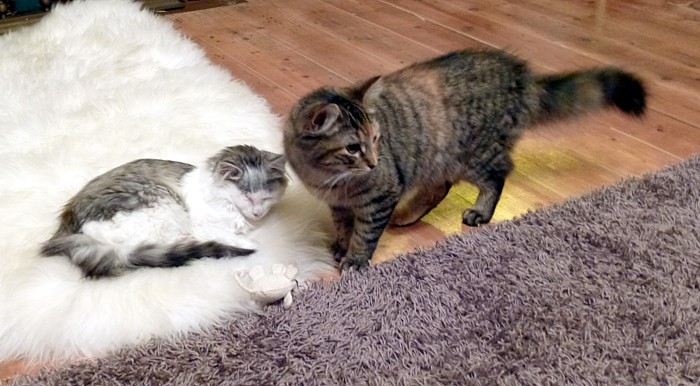 ▼ One of the many play towers stands in an alcove. 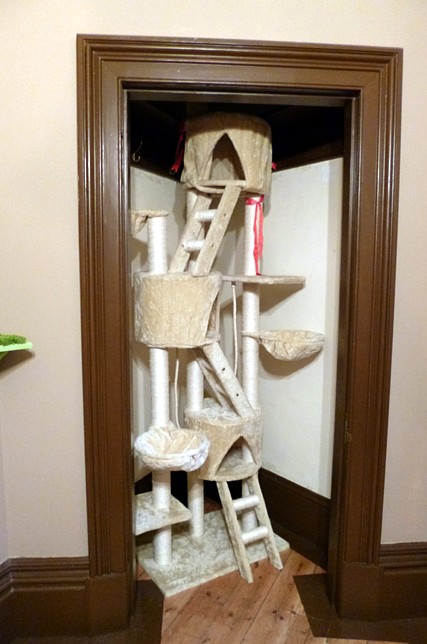 Through pouring rain, Husband and I battled our way to the café, located on the fringe of the CBD near Queen Victoria Markets. The café is in a two-storey building, a beautiful heritage building which by the looks of it used to be a pub and small hotel. Due to Australia's Food Handling Laws, which are stricter than in other countries, the cats must be kept separate from food serving areas. Therefore the café proper is downstairs, and the rooms where the cats live are upstairs. However, patrons are allowed to take their food and drinks upstairs if they wish, and staff are available to take orders so that patrons don't have to leave the cats to refill their drinks, etc. The downstairs café area is minimalist, with pre-packaged foods and a vending machine serving about 20 different types of coffees, teas and soup. There is an extensive range of cat-themed items on sale, including handicrafts made by locals, which I thought was a lovely touch. The brightly-coloured cat beds, scarves and other items on sale gave the café a fun, inviting look.


▼ Sherlock is fast asleep in the hidey-tube with just one ear poking out! 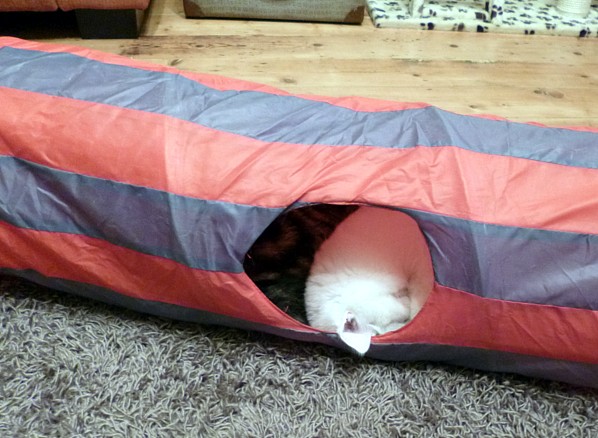 Husband and I arrived a bit early, and we vended ourselves a coffee while we waited with anticipation to be allowed upstairs. A maximum of 15 patrons are admitted into the cats' area at a time, for the safety of the cats and a more relaxed experience, and we were required to wash our hands before entering. (The hand-washing facilities are also available on leaving if patrons wish to use them.) The cats' area covers the whole top floor of the building. Four rooms provide plenty of space for the cats to roam around and the patrons to relax. For the humans there are comfy couches and café-style chairs and tables, as well as several bookcases filled with books and magazines (many cat-related, but not all!). For the cats, there are plenty of play towers, sleeping beds, cushy rugs and hidey-tubes, with toys scattered throughout. The decor includes cat-themed posters, and shelves covered with grass-like green shag carpet for the cats to perch on. Soon we forgot about the cold and wet outside as we settled in and watched the cats peacefully napping.


▼ One of the smaller rooms with welcoming decor. 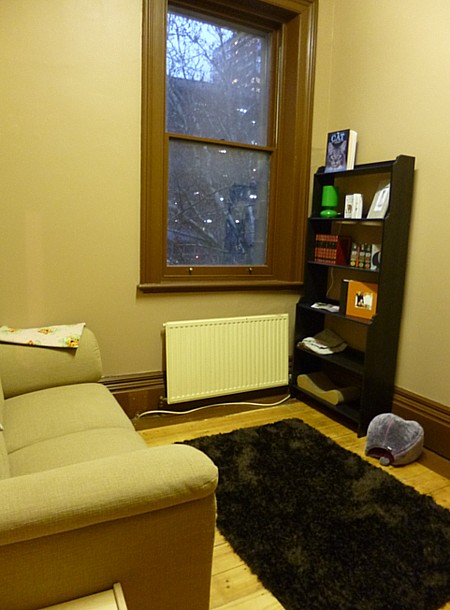 ▼ Lottie observes the other kittens playing. 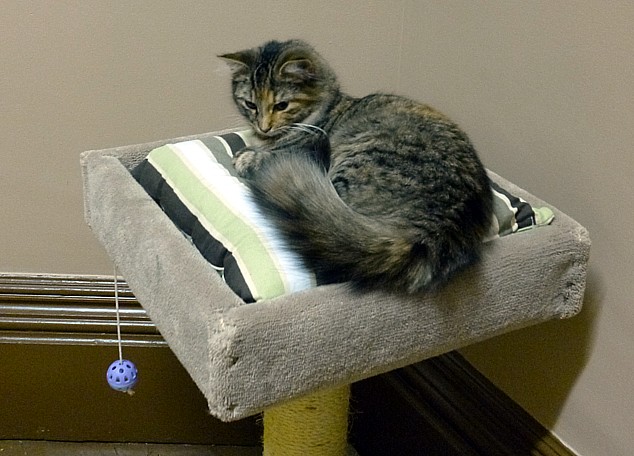 Cat Café Melbourne has a total of 13 cats at the moment (the maximum allowed by license is 15). All the cats are sourced from shelters, so it’s likely they're having a much better life than they might have otherwise. We saw 8 cats on the day; a few were sequestered in the private area due to having colds. When we arrived, most of the cats were asleep. Only Lynx, one of the oldest and biggest cats, was awake, sitting in the middle of the hallway where all were forced to step over him. He was definitely king of the castle! A little while later, pretty Lottie woke and was playing catch-a-mouse with a couple in the far room, but Husband and I sat near sleeping Ruby and Winter, snuggled up together on the sheepskin rug. 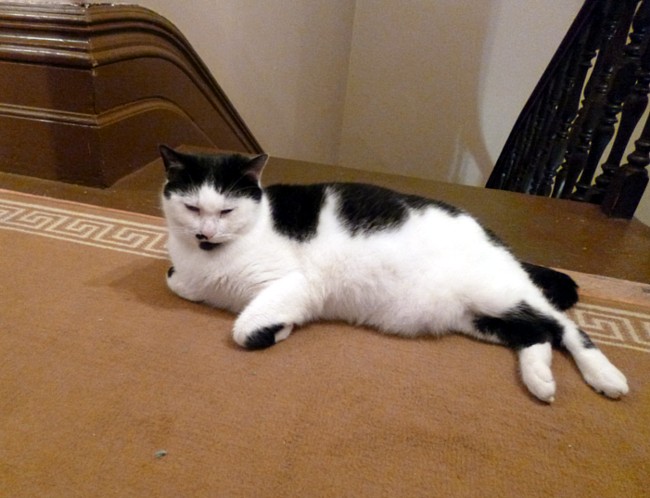 ▼ Braveheart asleep in the hidey-tube. 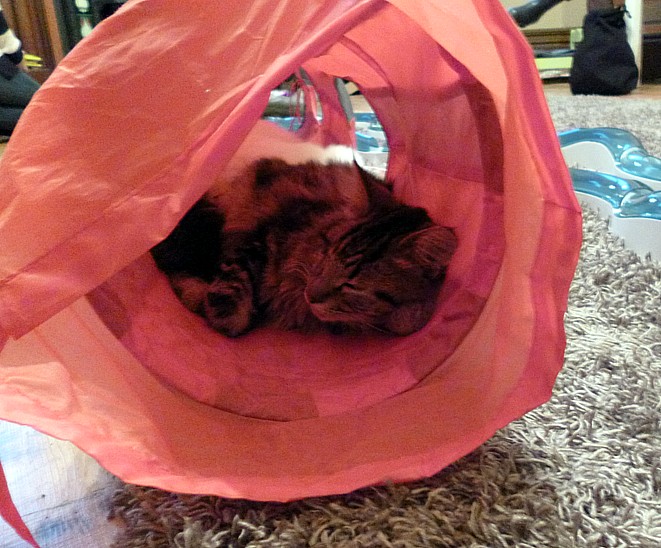 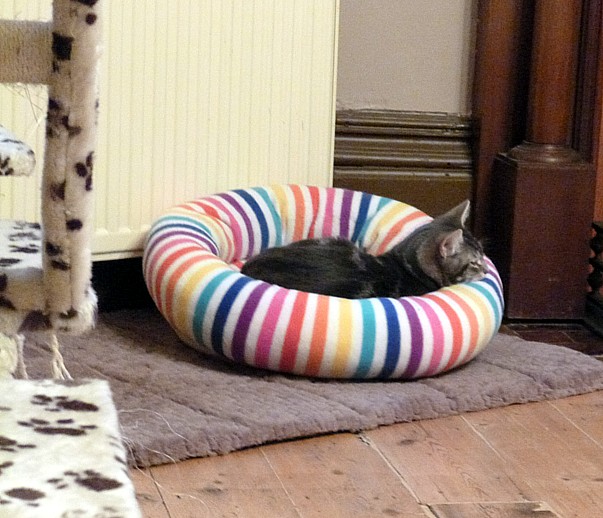 I had a special moment with Ruby as one of the staff told me she doesn't mind being picked up and held while she naps. She purred as she snuggled up against me, and let me know when she wanted to get down with a quiet 'mew'. 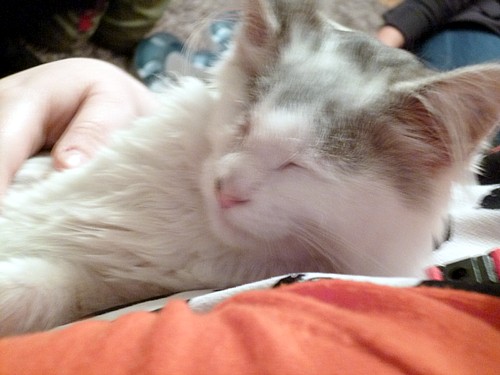 There was a sense of camaraderie amongst the patrons that really impressed me. Everyone seemed relaxed and happy. Some chatted quietly, others just sat and admired the napping cats from afar. After a while, most of the cats woke and started either wandering around or playing, and the sense of excitement among the patrons was contagious. Crawling around on the floor or lying on one of the shag rugs was perfectly acceptable behaviour, and cries of 'awww!' and 'oh he's so cute!' could be faintly heard throughout the rooms. Just before we were due to leave, Sherlock crawled out of the hidey-tube and started living up to his name by investigating a couple of nearby cat lovers.


▼ Lynx near the entrance to the cat's private room; Lexi emerges from under the couch. 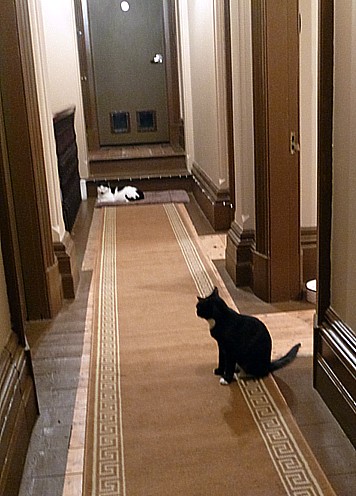 ▼ Ruby, Lottie and Braveheart playing with one of the many toys. 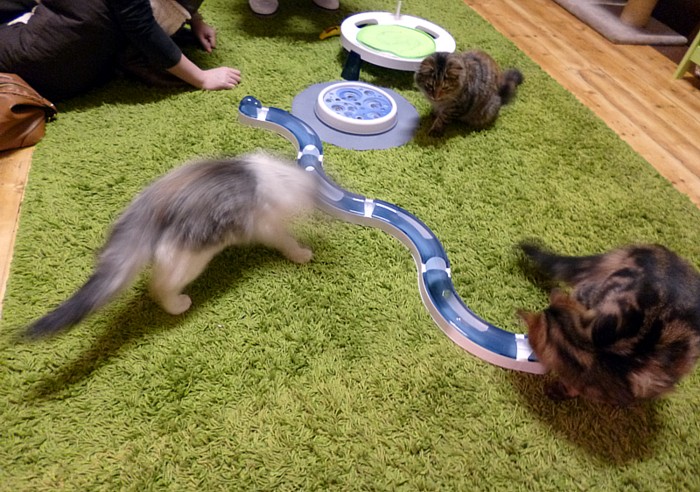 All too soon our hour was up, and we had to say goodbye to the cats - for now! I was smiling all the way home, and couldn't help giggling when I thought about the playful cats and how they made us and our fellow patrons so happy. The day we visited, the café had been open for only 2 days, and I was impressed with how smoothly everything ran, and how much thought had been put into the whole operation. I will certainly visit the cats at Cat Café Melbourne again.


Entry Cost: $10 per person for 1 hour with the cats
Opening hours: 10am - 9pm, every day of the week
Bookings: Cat Café Melbourne 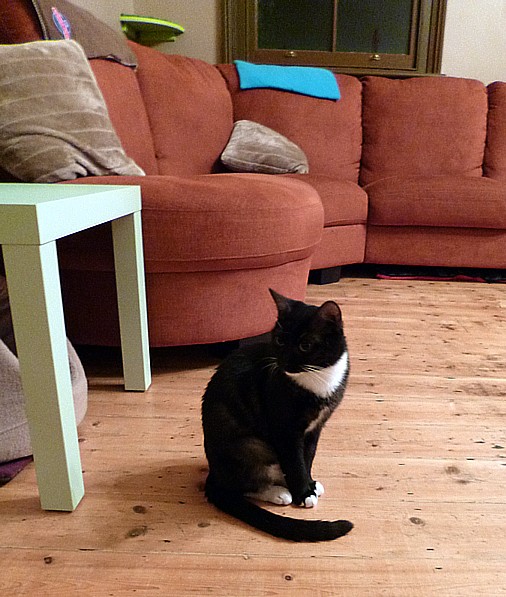 ▼ Winter grooms Ruby while she plays with a mouse toy. 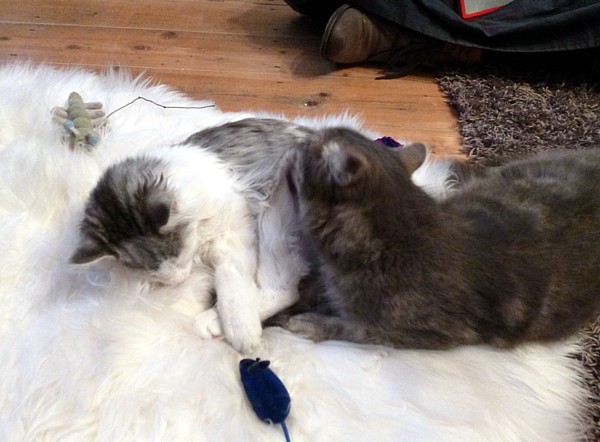