I was at the library last week to pick up a book, and on the display near the front door, I saw Wacky Baby Knits, by Alison Jenkins. Of course I had to grab it! 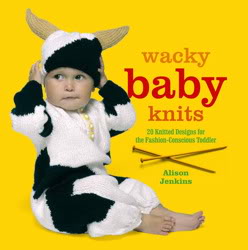 There are 20 patterns for babies, some more wacky than others. My favourites were the Cupcake Hat, Elvis Wig Hat, Winged Bootees, Monster Mittens and Bootees set, and the Cow Suit. The Aviator Hat was more elegant than wacky, but I also liked that one a lot, too. 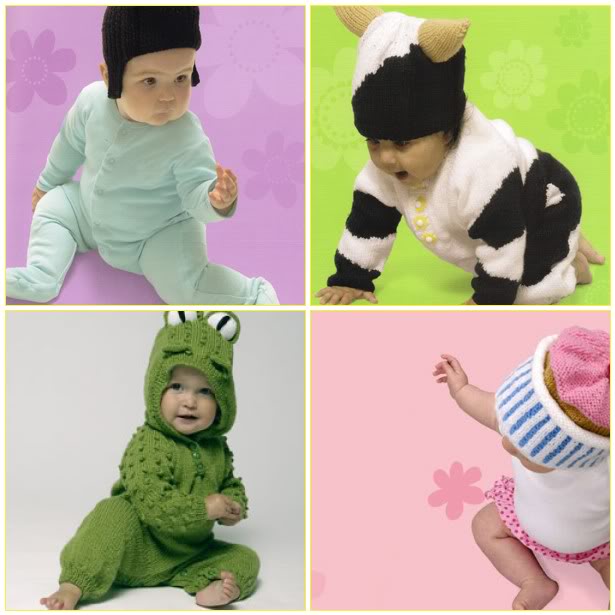 I'm umming-and-aahing over whether to make the Cupcake Hat or the Aviator Hat first. The Cupcake Hat is more complicated, but the instructions for the Aviator Hat are more ambiguous. I find baby patterns to be a bit frustrating on the sizing. I know it's hard - babies grow so fast! - but it's still annoying. Most patterns I've come across have "0-3 months" as the smallest size. I only realised through trial and error (not knowing that much about babies until recently) that an item that will fit a 3-month-old will be far too big for a newborn. So when I give an item in that size to someone who's just had a baby, it's way too big and they can't use it yet. It's disappointing for me, and I'm sure it is for them as well, and I can never be sure if they actually use the item later on or if it gets lost among the piles and piles of stuff that new parents usually get given. That's nobody's fault! I'm just saying that the maximum satisfaction all around comes when you give something to a parent, and they can start using it straight away. 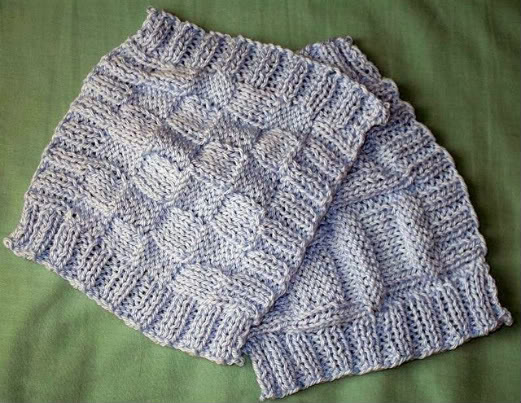 There are only a few baby items which don't need to be fitted. Off the top of my head, I'm thinking of washcloths, bibs and blankets. I'm quite happy to make any of these (though blankets obviously take a long time); the only issue with them is the "it's too nice to use" factor. On the other hand, I'm really a process-oriented knitter. I like thinking of a design, figuring out how to do it, and then doing it. That's what give me a sense of satisfaction. Most of the scarves and headbands and etc I've made for myself, I never even wear. It's the process of making them that makes me happy. So the idea that something I've made might never get used, isn't really that upsetting to me as it might be for other people.

Anyway, I'm over-thinking again. I'm going to knuckle down now and decide which project to start first!
No comments:

Hello! After a fairly long absence, about a month ago I started to become really motivated to craft again. This came about because of a couple of things: really cold weather, which makes me want to make scarves and hats and gloves! Two of my friends having babies, which makes me want to create little treasures! And just last weekend, a geek-themed trivia night, which put me back in touch with my geeky interests and made me want to start churning out Jane hats and Dr Who scarves!
In a word, I'm excited!

Today I'm just going to share a quick run-down of what I've been doing in the last month, so get ready for some photo-spam! Later on, there'll be more in-depth posts.

So the first thing I did was make these baby booties. This was about a month ago. S and B came over for a craft/card-playing afternoon. I decided to start some booties from the Quick and Easy Baby Knits book. It's a simple pattern and I thought I'd get a good way into it. In fact, I worked hard and I finished them in one afternoon! Yay me! I was able to give them to Ms E at her baby shower. 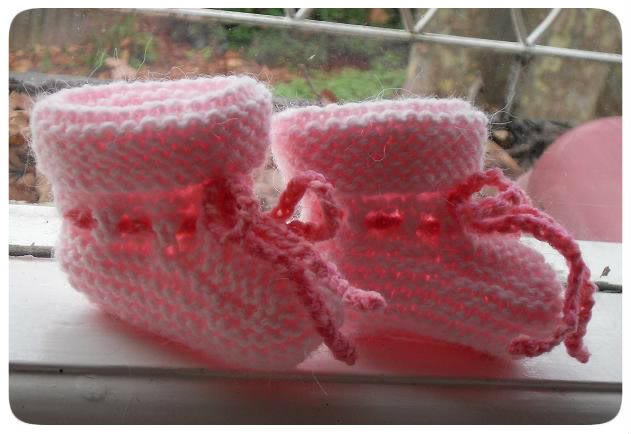 I also started a project that I'd been meaning to make for a couple of months - cat toys! They're semi-urgent because I want to make them for a friend as a thank-you gift for something that's rapidly moving further and further into the past! My plan is to make a set of 3 in simple shapes. I'm about half-way through the spherical one: 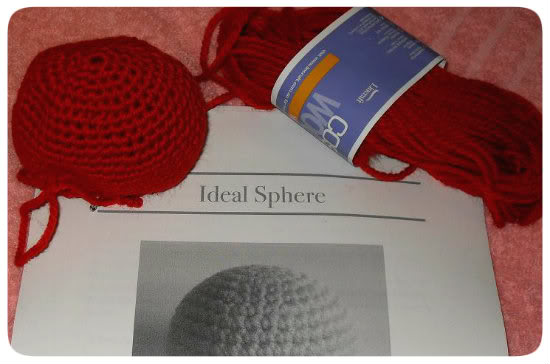 I've also been working a little bit on my rainbow-coloured afghan, which doesn't really have a name. I've nearly finished this section, and I think I only have about 2 or 3 to go. I'm very happy about that! 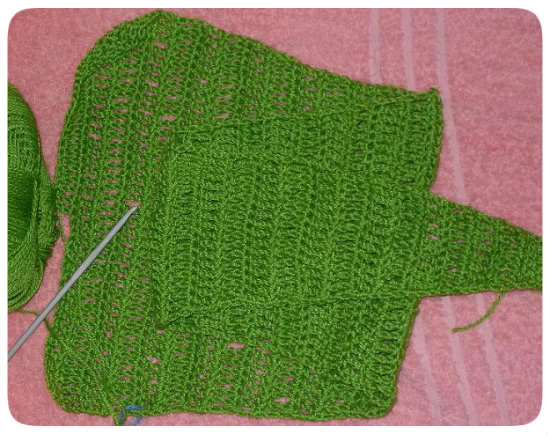 I have a few ideas in mind about other afghans I'd like to work on, so it'll be good to have that finished off so I can start one of those. Or, knowing myself, I'll just start one of them anyway!
I'm also coming along well with the Jane hat for Husband. I want to get both his and my hats finished before the charity Firefly screening, which is in about 6 weeks. I think I'm well on track for that (if I don't get distracted by other projects!). I altered the original pattern so it's more fitted. That means less stitches, which means finished quicker. Yay! 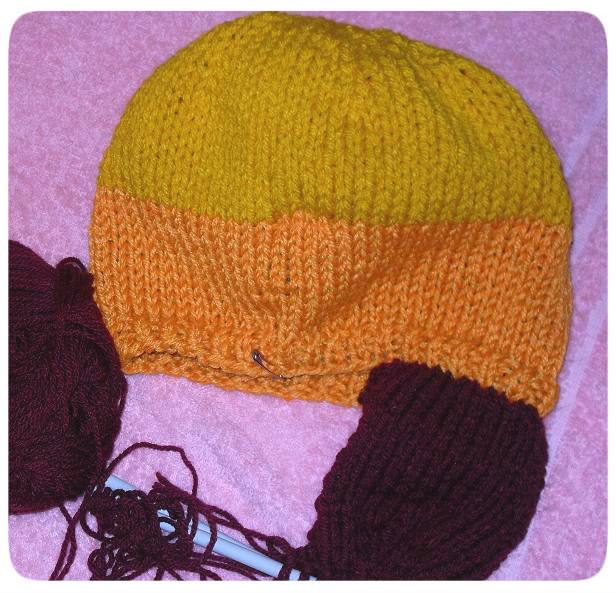 I'm still on a bit of a Hama bead kick, and a few weeks ago I made this little storage box. My perfume vials kept falling over all the time, and it was really annoying me. So I made a box to put them in! 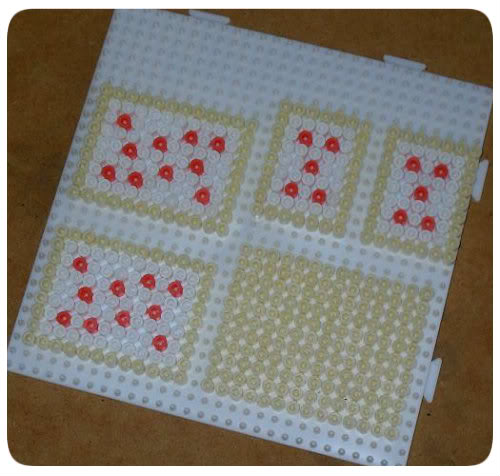 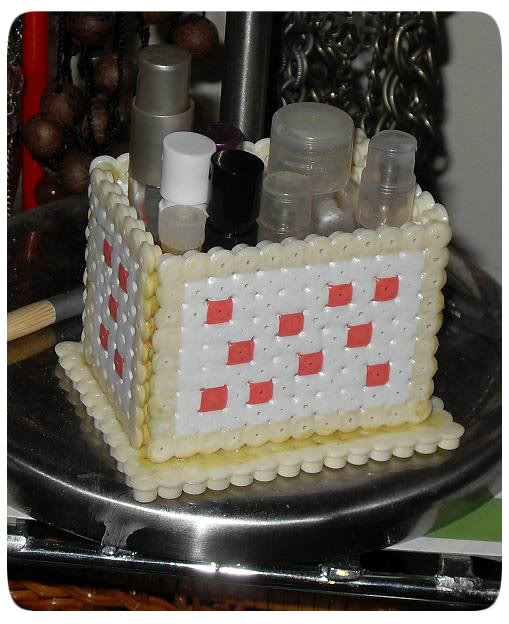 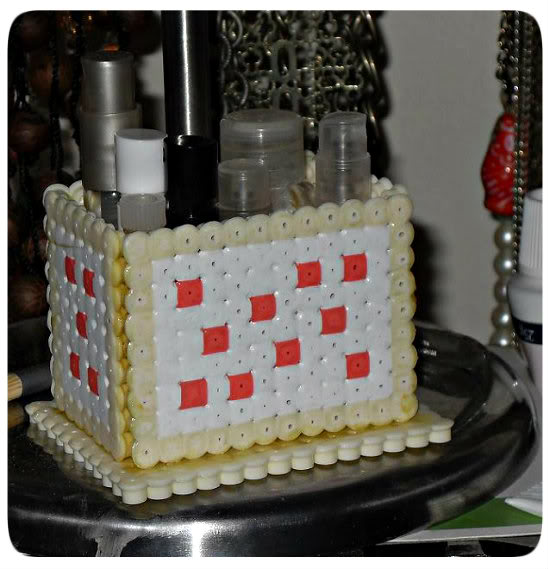 I made it with a lip on the bottom edge for stability, and just the right size and height for all my mini perfumes. It also fits perfectly on my mirror base, just where I wanted it to go. The pattern was something I just made up. The polka dots are a little uneven, but I like it that way! I made each piece separately and glued them to the base with epoxy glue. I don't know if I would use this method again. I found the edges of the beads were a very small surface to glue together. It came out how I wanted it to, but I don't think it's very strong. It holds together fine for its purpose, but I wouldn't want to test its strength. There are a few other methods you can use to make a 3-D box; I'll try one of those next time. I'm pretty excited about this - being able to make little containers in just the right size and shape that you want them (not to mention colour!), instead of hunting around the shops for hours and usually not finding anything. I love Hama beads!

I'm so inspired at the moment! I even had a dream the other night about making an afghan. It was a 70s retro-ghan, made out of granny squares. Each square had an orange centre, a couple of rounds of brown, and then a couple of rounds of cream to lighten it up. I want to make it in real life! Though I don't have any orange or brown wool, funnily enough!

I'm just completely wired at the moment!
No comments: