I told myself I wouldn't buy any more craft supplies this month. I've spent far too much on them already! (Actually, I don't really believe that. There's no such thing as too much! But somehow I don't think my doctor, pharmacist and landlord see things the same way.)
But when I saw a link to Angoo-Mart [now defunct] on Eccentric Spirit [now defunct] (a new blog I found today) I got so excited that I couldn't help myself! They sell deco tape online - lots and lots and lots of it! And it's so cheap that it wasn't hard to tell myself that I could justify buying a few. (Just a few, yeah, right!)
If you hear squealing in about a week's time, that'll be me! P.S. No, I didn't buy quite this many rolls!
No comments:

What I've Been Up To

I've been dividing my time pretty evenly between art and craft.
On the craft front, I've started the famed Shrug: 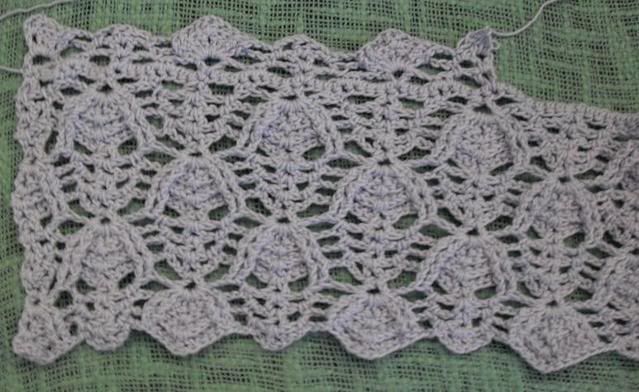 I've decided to call it the Little Trilobite Shrug, as that's what the lacy shapes remind me of. I've done the upper back and just started the left front. I've also been plugging away on the Chequered Baby Blanket and I'm probably about 1/3 of the way through. I could be an Auntie any day now! So I'm starting to feel a pretty urgent need to work on it. I've also been working on my Art Journal: 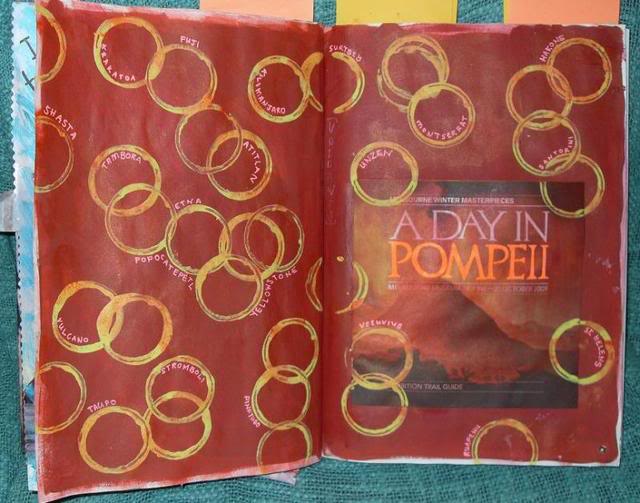 I decided to ephemera-ise (?!) the brochure I got at the "A Day in Pompeii" exhibition by gluing it into my art journal. This is one of the rare pages that I've had a plan for from start to finish. I really like how it's turning out. Perhaps I should plan them more often! I just had an image in my head of how I wanted it to look. All except for the inside of the brochure: 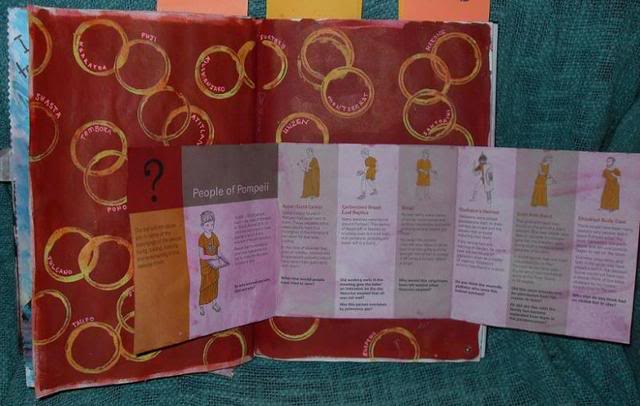 It's taken me about a month to get this far. I seem to start a lot of pages and then don't know how to finish them. Last week I went through my journal and marked all the pages in progress with sticky notes for convenience. There were 14!! Then I went through again and marked all the pages that I had a plan for. There were 4. But I'm not too worried about that. The whole point is to have fun!
This is another page that's been in limbo for a while. I started working on it again yesterday: 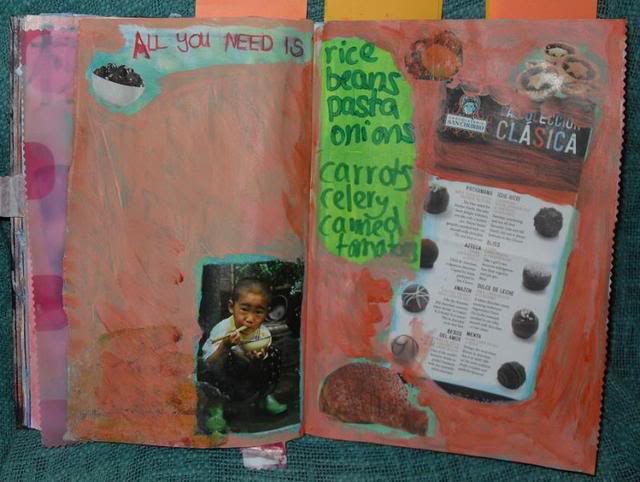 It's sort of dedicated to food and cooking. I cut some images of foods from supermarket catalogues. The page had a quote on it that was really irrelevant to the theme, so I copied it out on another page and painted over it. Today I tried doing some gel transfers on it, but they didn't really work out (see bottom left-hand corner). I'm sure I'll think of something to do with it one day soon!

When instructions for a craft project say to use a certain material, but only say the brand and don't say what it actually is.

For example, I have seen a few projects lately that say, "use Elmer's to to attach the [whatever it is]". What is Elmer's? We don't have it here in Australia! They could at least say what it is! Is it a white PVA glue, a clear tacky glue, a school paste? Would it be so hard to add just a few words so that I know what SORT of glue to buy? Do I have to google it? Can I be bothered?

I used to be a predictable crafter, a seasonal crafter. In the winter I would knit and crochet, in warm weather I would embroider, and in hot weather I would draw and paint. Now I'm all mixed up. It's the middle of summer and I want to crochet! Specifically, I want to make myself a shrug (or bolero, if you prefer). I never used to like them very much, but now I've realised they are my friend. I have a purchased one that I wear all the time. I can wear it to work when the weather's cool in the morning, take it off in the office when I've been moving things around, then put it back on when I've cooled down and am feeling self-conscious about my arms again. I love my shrug, but a girl needs variety, so I decided to make myself another one. I trawled through Ravelry until I had a short list of patterns. It took me quite a while. The vast majority of them were too long, too short, arms too long, no arms, front wrong shape, too lacy, too solid, too wierd, too many dangly bits, etc etc. The modular patterns with crocheted squares seemed to appeal to me the most, perhaps because I've been working on the baby blanket in modular form recently.

Still, none of them were quite right. Perhaps if I chose a stand-alone square block pattern and used the joining method in these patterns to construct a shrug? I can do that! I can use my existing shrug to work out the measurements! So then the process of choosing the right block began. 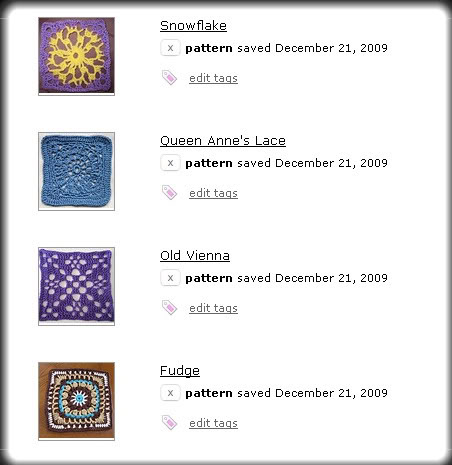 My long list consisted of about 15 blocks on Ravelry, not to mention any that might be in my 200 Knitted Blocks and 200 Crocheted Blocks books! I let things sit while I was waiting for my yarn to arrive - my first order from Bendigo Woollen Mills - yay!!! It arrived yesterday and now I want to get to work! I logged on to Ravelry today to record my new purchases in my 'stash' section, and then I decided to see what other projects had been made with the same yarn. (Ravelry is great like that!) Well, I just happened to come across this! 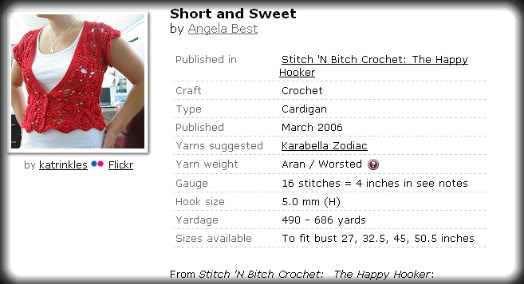 It's perfect! The body is made all in one piece, with the arms added by working along the armholes. So no sewing up or joining pieces. And the pattern is really pretty. There's only one drawback - it's not available for free on the Ravelry website. I can't have instant gratification, dammit! It's from Debbie Stoller's book The Happy Hooker. (Get it?) I'd borrowed it from the library some time in the distant past, so as soon as I got home, I went through my half-organised stash of photocopied patterns. But I didn't find any from The Happy Hooker in there! How strange! And how frustrating!

So I logged onto the Library website and put a reservation on it. There are 3 copies, and they're all out! How long will it be until I can have my shrug?


All images thanks to Ravelry.
No comments:

Hey Mum, Look what I made!

Hi Mum,
I made some savoury poffertjes! 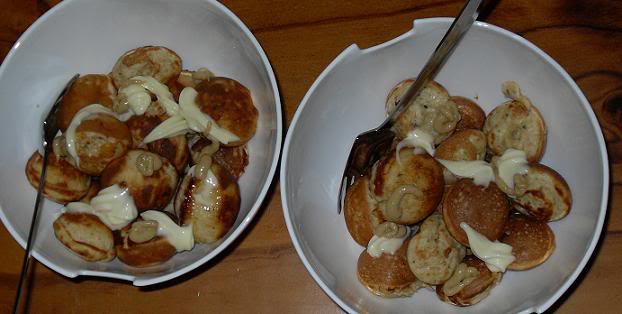 It's just a basic pancake mix with grated cheese and baby corn (both chopped up tiny), dried herbs, minced garlic and mustard flavourings. And a bit of salt.

My bowl is the one with slightly less mayo. hehhehe
Hope you're having a good weekend!

I read quite a few blogs and news outlets, and all the writers that mentioned New Year have been glad that 2009 is over, been glad that the whole decade is over, as a matter of fact! (I know, I know, the new decade doesn't actually start til next year, but as with anything popular, it's the numbers that count, not the facts.) I don't know all of their personal circumstances, but when I think back on some of the major events of the last decade I can understand why many people want to leave it behind. Being able to say "twenty-ten" instead of "two-thousand and blah-blah" is just the least of it! As for myself, I certainly want to leave 2009 behind and move on!

I learned a lot from the resolutions I set last year. I learned that 'goals' is probably a better word. 'Resolution' seems to have a whiff of failure about it. I learned that the goals should be specific, realistic, tangible and suited to my temperament. Hang on a minute, this sounds a lot like the SMART Goals system I learned in business management class! So that Library Studies course was good for something after all. You may note: I have more goals this year than last year - I guess I was feeling confident.

Here they are as set out in my art journal: 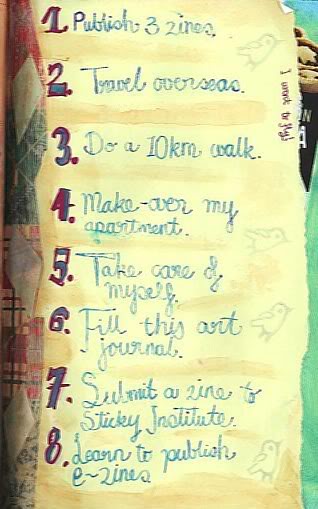 Ooh. That scan is really quite awful, now that I look at it. But you get the gist.
And here they are analysed (cause I like that sort of stuff):

1. Publish 3 zines.
I love writing zines, I really do. Researching and writing is one of my favourite things. It takes a lot of bravery for me to present them to the world, but I think it's good for me. I chose three because it doesn't seem like too overwhelming a goal. Plus I've already written one story two stories, so I'm practically half-way there!

2.Travel overseas.
Pretty much self-explanatory. I have the money, I just need to find the time. Europe is my first choice this time.

3. Do a 10km walk.
New Year's Resolutions like 'lose weight' almost inevitably fail. I enjoy walking and I want to improve my fitness and endurance, so I thought it would be better to aim for a specific fitness goal that encompasses these - and if I lose weight along the way, that would be great!

4. Organise my apartment.
I could do a series of posts and call it 'Apartmentcat's Apartment'! Nah, that sounds wanky. But this year I really want to get things sorted out and have a space I enjoy being in and enjoy inviting others to be in. I already have a general plan of what needs to be done and larger pieces of furniture that need to be bought, so step one is already taken care of. I feel there will be a lot of purging. I'm ready to be ruthless! This article: Count down to less clutter looks like it will be helpful. Then once that's done, I can make crafty and sweet embellishments for my new home! yay!

5. Take care of myself.
This sounds vague, but it encompasses a lot of specific changes that I want to make, from drinking more water to getting allergy injections. Boy got them last year and according to the latest tests, he's no longer allergic to the cat! That makes me so excited! Perhaps one day I won't be, either!

6. Fill this art journal.
(The art journal that I'd written these resolutions in, that is.) I enjoy working with my art journal so much, and I can see myself continuing with it in the long term. My art desk has become a bit messy again, so I'll have to sort that out, but I'm feeling really good about this one. [Later:] I've just discovered a new forum about art journaling which looks very promising!

7. Submit a zine to Sticky Institute.
Sticky is a zine shop in the city. The possibility of selling zines through them has been something I've been aware of for a while. I always thought, "perhaps one day!" I've written 9 zines now. Surely with my bright, new-found attitude I can convince myself that at least one of them is worthy to submit.

8. Learn an e-publishing program.
I like the idea of trying out free or low-cost e-zines - they're the way of the future, don't you know! Traditional photocopied zines are wonderful, but I'd love to produce something with as much colour as I like without worrying about printing costs, etc. I've also thought of scanning a few of my extensive collection of vintage craft patterns and offering them in my Etsy shop. It would be good to make something snazzy for the consumptive public.

So there it is! Feeling good! Let's craft!
No comments: Hope you're enjoying a lovely New Year!
I'll update on my plans for this year soon!
No comments: