Project: Divination Mat
Craft: crochet
Started: 1st September 2017
This project is a relatively recent one, and it's quite large already. I think I wanted it to be 50-60cm square. I already had a small mat which I use for Rune readings, but my interest in Oracle card readings re-surfaced last year and it was too small for that. I happened to have this beautiful Bendigo Woollen Mills Stella, which is silky to the touch. I started making a scarf with it but changed my mind and ripped it. Now it's being re-purposed -- if I ever finish it! I measured it and it's already 45cm wide, so it's well along. 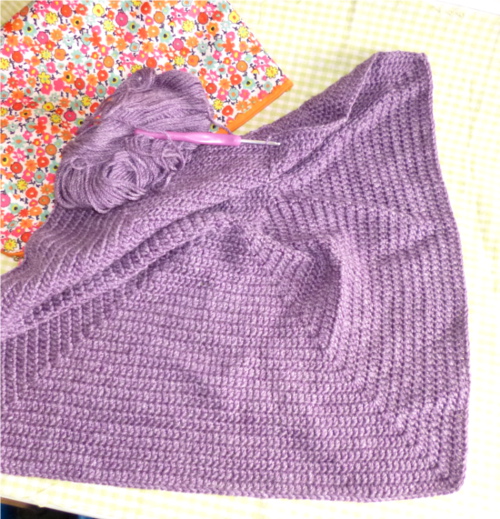 Project: Frankenstein's Toyster
Craft: knitting
Started: 2007
Similar to last month's project, this was more of a fun experiment in making a monster. I deliberately tried to make it as 'ugly' as I could, with blocky shapes, exposed stitches, and different knitting stitches creating strange textures. Poor old Frankie has suffered the same fate as most of my other monsters so far -- languishing in the back of the cupboard, unfinished. Frankie just needs a head and maybe some embroidered embellishments and he can join my finished monsters. 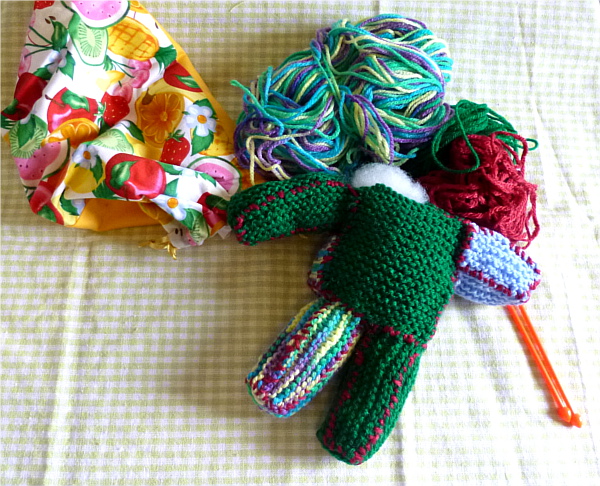 Project: Yarn Picture
Craft: yarn painting
Started: c. late 1980s
I started this project in early high school. I think I must have read a book about Mexican crafts, because I remember deliberately trying to give it a Mexican style. I worked hard on it and prepared a frame for when it was finished, so I'm surprised that I still haven't finished it. Glueing the wool down was unexpectedly fiddly and messy, so perhaps that's why I was put off. 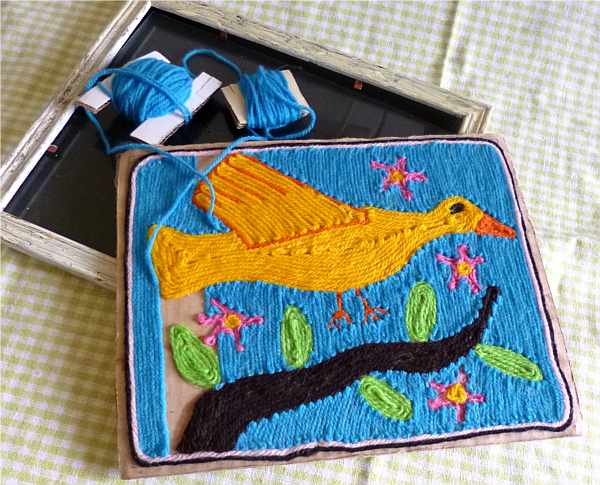 There are only a few small areas to finish off, so it won't take much work. And I might perhaps touch up a few areas, like this squished-looking flower: 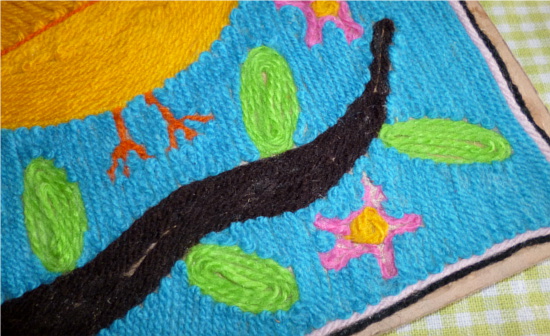 I still really like the idea of yarn painting as a craft, and would love to create a series of them to decorate my house.

The accidental theme for this month seems to be: nearly there! All of these projects were much closer to being finished than I thought they were. I feel more motivated to work on them now than I was before.
No comments:

I meant to post my unfinished crafts report on the last weekend of April, but due to the health issues I mentioned in my last post, I spend most of that weekend sleeping. But never fear, here it is now:


Project: Squares Blanket
Craft: Crochet
Started: 1 March 2011
This was the first large blanket I'd planned. I was inspired by a photo of a bedspread from a magazine. I didn't have a pattern so I made up my own -- and I think that was the problem! The corners of the squares kept rolling up. Later I found a pattern in a book and started making the squares from it, but then I had the problem of the earlier, failure-y squares. I started fixing them, but then I must have unconsciously given up, because I started making the Granny Square blanket from last month's report.
Chance of completion: I'd say about 60%. 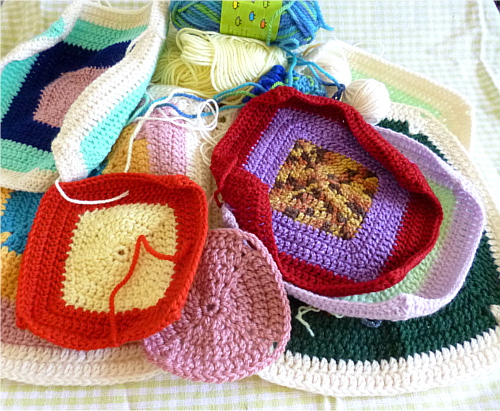 Project: Kitten Embroidery
Craft: Embroidery (tapestry)
Started: Mid-2011
I do like embroidery, I just don't have the patience most of the time. For some reason I chose this piece with tiny, tiny squares as one of my first projects. Some of the colours are also very similar, and it was very difficult to make them out on the pattern. I managed to get the grey parts finished last year, and I'm pretty sure I'll finish it one day. Then I need to find a place that will frame it, as I probably won't be confident to frame a circular piece myself. 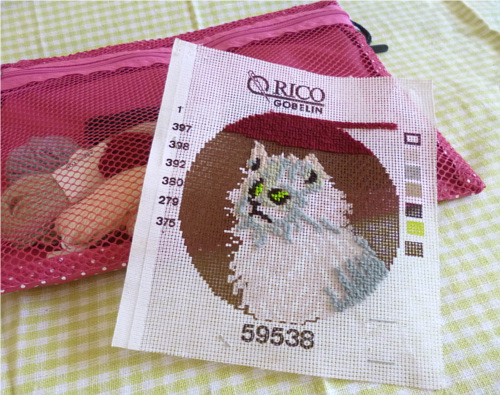 Project: Rambunctious Roy
Craft: knitting
Started: 2008
This project is an experimental piece. I was trying to create monsters using various techniques of crochet and knitting. I figured out pretty early on that this technique wasn't really my thing -- too fiddly, too many double-pointed needles. Unfortunately that means poor Roy lay, languishing and unfinished, in my cupboard ever since. I really only want to finish Roy so I can have this particular project off my plate, and because ... well, look at that face! 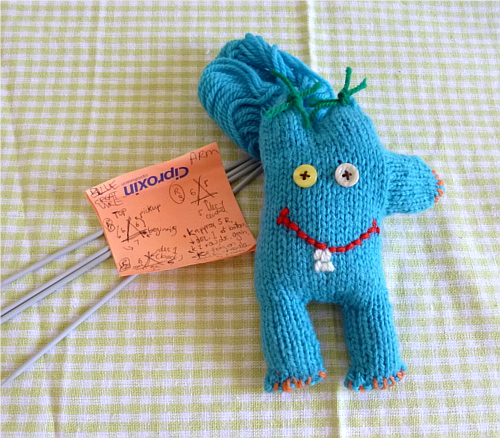 Unfortunately I had some health issues last month, and didn't get to do much of what I wanted to do. That's why this post is a bit late!

I did manage to do a couple of things, though:

What I've been celebrating ...
April is my birthday month, and I celebrated with a brunch. Many of my friends have kids and dogs now, so it's just easier to go to a cafe that I know is friendly to both, plus has great hash browns! 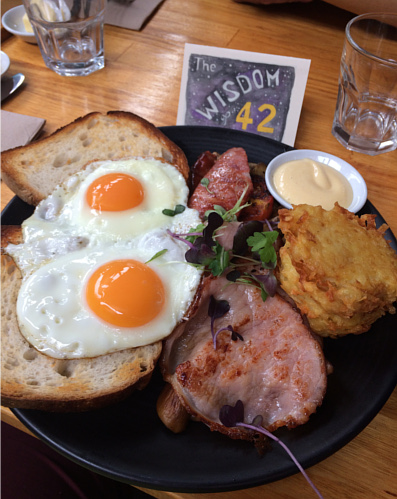 As a thank you to my friends who attended, I made these 'Wisdom of 42' spoof oracle cards. My friends and I have an occasional running joke that when you reach the age of 42, the answer to the ultimate question is revealed to you. I spent an afternoon painting a design, then printed out copies onto cardstock and wrote out oracles for the insides. Before everyone arrived, I placed one at each table setting so they received a random oracle. 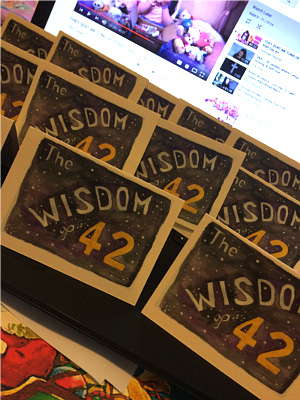 My favourite one: "I see bacon in your near future."

P.S. I'm no closer to knowing the answer to the ultimate question than I was before, I'm afraid to say!


What I've been planting ...
This month I planted a tree (well, to be honest, more of a small shrub, but it sounds cooler to say I planted a tree!). I planted it for spiritual reasons that I might write about someday, but not right now. It's a Mexican orange blossom. Mr. Gnome is there to watch over it until it grows big and strong. 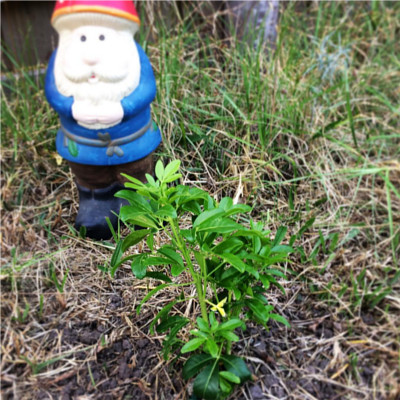 What I've been showing ...
I may have mentioned it on my Facebook a couple of times, but not here on the blog: I had a painting in an exhibition this month. (I'm terrible at self-promotion! It's still open until tomorrow if you're in Melbourne!). Here's my little fella, the one at the top: 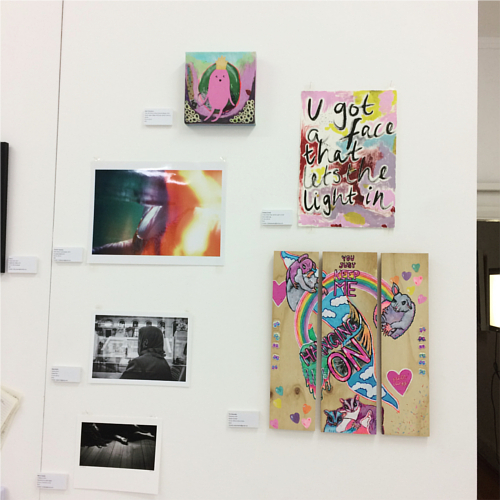 I almost feel like I cheated with this one: the exhibition involved artists who had previously exhibited at the gallery, so my application was automatically accepted. The painting is an old one that I did last year. I chose it because it's my favourite one, I think. I'm not feeling very confident with my art lately, and I think it was better for me to show an older piece that I like rather than make a new one that I might not have been happy with.


What I've been eating ...
Husband and I went with a friend to One Plus Piece Cafe. It's a themed cafe based on the anime One Piece. We were incredibly excited because, despite Melbourne's reputation for good food, it's not often that you can find fun food, in the tradition of cafes in Japan and Taiwan. I have to admit, I'd never seen One Piece, so I researched by watching the first episode of the anime and reading the Wikipedia page before going. 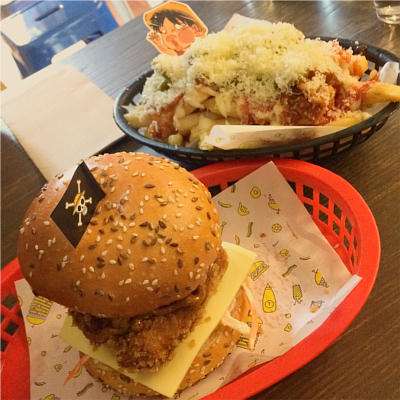 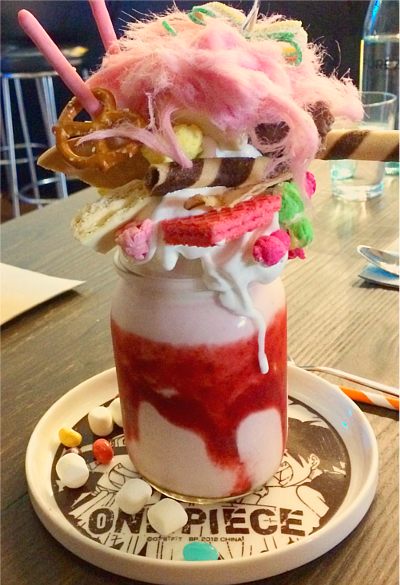 I had a karaage (Japanese fried chicken) burger with coleslaw and spicy sauce, and a red-haired shake for dessert. The shake was so tall I had trouble taking a photo of it! We were completely overwhelmed with the inventiveness of the foods and the attention to detail paid in the decoration of the cafe. Ironically, it's located less than 10 minute's walk away from where we used to live before we bought our house. If it had been open then, we would have been regulars! Now, we're half an hour's drive away, but it's worth the trip! 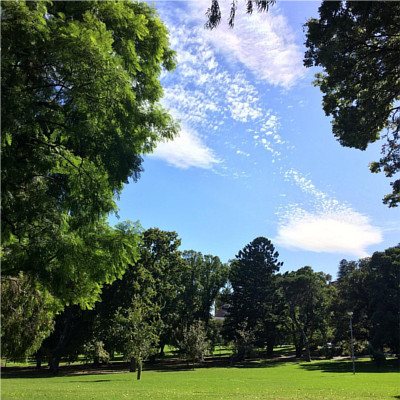 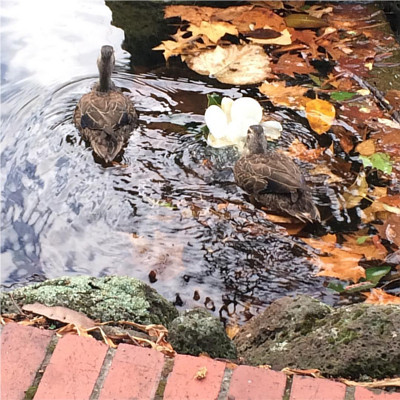 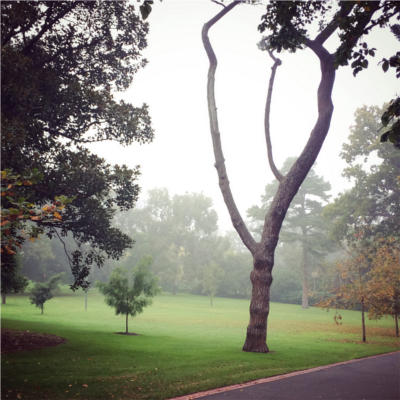