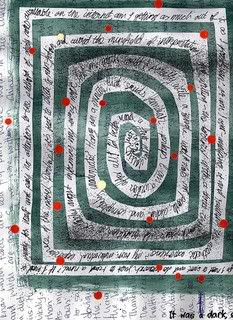 Here is my art journal entry for this week. (Well, for this month, as it's turning out.) All I've been wanting to do is read lately. At first this worried me, because I was only taking things in, not putting anything out. But then I thought, why can't I make art on this theme? So the theme is Reading and Writing.

(Please note that one edge is cut off in this scan!)

The bottom layer is a rough draft of a book review I wrote for a zine I'm making. Over it I painted a green rectangle. This represents The Book, with the colour being that of many older, hardcover books. Over the top I have stuck a text that I wrote in a spiral. The subject expresses some anxieties I feel about both reading and writing. It came straight off the top of my head and as I wrote it from outside in, I didn't know how long it could be. I also didn't have the chance to cross anything out and start over. So it's probably not as good as it could be, literary-wise. But it felt good to write. The red dots are scraps that I collected from work and stuck at random over the top. Dunno why. I felt it needed some colour.

I had the whole layout of this page designed in my head at least a week before I started, unlike any of my other pages. In some ways this was good, as it cut out the 'fear of the blank page' and 'what do I do now??' factors. But on the other hand it felt a little sterile. I'm not sure which way I prefer.

I've been wanting to draw lately. Today I was in a meeting, and I had a strong urge to draw my manager's nose. Yesterday I really wanted to draw the plant on the next desk.

Can you apply for Art Leave??

Today was the day. The wait is finally over.

I finally took some photos of the art doll I finished over two weeks ago! Even after I had taken it to the sellers' meetup and Boy had overheard some compliments on it, and kept saying that if/when I put it on my shop, it'll sell quickly, I still didn't get around to photographing it. Anyway, without further ado, here it is: 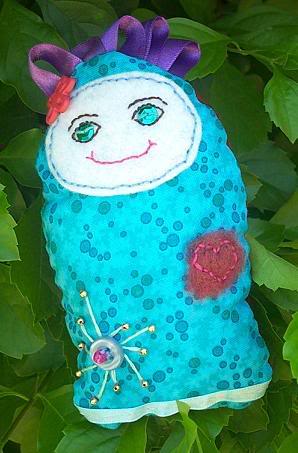 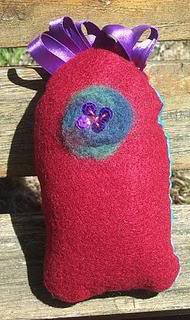 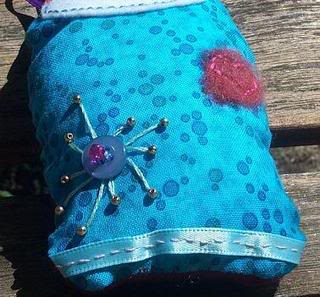 the back ; detail of front

I have to admit, it's quite heavily based on the Dotee Doll style invented by the lady in Perth who I was talking about a few posts ago. Now, I dunno what the 'rules' are about these things - shape of top, eyes open or closed, type of embellishment, or what. I just went to town with whatever kind of decoration I felt like doing. So I made it with open eyes, and used some needle felting for a heart on the front and some abstract decoration on the back. I embroidered a bit with buttons, beads, sequins and ribbon, til I got bored with it. Then I sewed the front and back together by hand, and sewed the purple ribbon in for hair as I was sewing it up.
I'm quite happy with it. I'd like to make another one, but I want to try and make it more original and specific to my style. 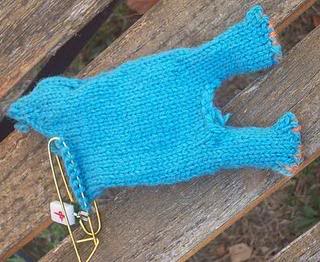 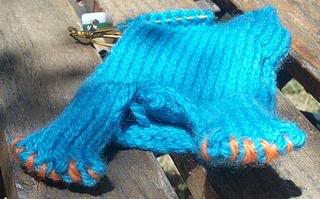 I used a technique from Mochimochiland to make the legs and join them together. This leaves a hole between the legs that you sew up later. Hence why my creature has a giant hole in her nether-regions! I utilised the access this holes gives to weave in the ends at the bottom of the legs and embroider some 'claws' on. Oh, this is really sounding so wrong.... *secret smirk*
I have now finished the body; the picture shows it with one ear completed, but I have now finished both ears and started one arm. I'm going to finish the arm, then embroider on the face, etc. through the arm-hole on the other side, then knit on the second arm last.

Perhaps this isn't the most efficient way of making this toy, but *shrugs* schnyeh. I think that knitting toys is a bit too fiddly for me. All those double-pointed needles sticking out all over the place - it's annoying. I think I'll stick to crochet from now on. I also wanted to make a toy that was symmetrical and straight out Cute instead of a bit fugly, but I'm starting to think that's really not 'me', either.

Perhaps I am working out my style, after all.

The other major thing was, after finding this blog Joyful Abode, about creating harmonious spaces to live happily in. She is currently hosting a series on creative spaces. I was heavily inspired to finally get the Hobby Room into gear - organise everything and tidy the place up. Not only that, but fill it with inspirational objects that will make the room a pleasure to be in. Or whatever.

So yesterday, I spent the whole day tidying and sorting. Except for an exhaustingly expensive trip to Bunnings. Boy took 'Before' photos, which I'm too embarrassed to show - yet! To be fair, I should mention that Boy worked very hard yesterday too. The room is supposed to be going to be for his photography and other hobby stuff just as much as for mine. Most of my beads are sorted now, which makes me want to make another art doll. Whenever I uncover another supply or piece of equipment, I want to make something out of it. This is good! My creative juices are flowing again.

Although, they make me want to make wool scarves on 35oC days. Not so good. Oh well!

Art doll going up on the shop tonight.

I'm such a good person *smirks*

I discovered the Kiva website a few months ago and I thought it was great. They're an organisation that broker microloans between cash-poor entrepeneurs in developing countries* and cash-rich Ordinary (albeit bloatedly rich and decadent) Joes in developed countries. Each lender contributes US$25 to a loan, of which 100% goes directly to the businessperson, and which is paid back within 1 year. You can also give a straight-out donation, or buy gift vouchers.

I decided that as soon as I had made my first $25 from my shop, I would lend it to a person/group on Kiva. I want my 'business' (as I'm still hesitant to call it) to be socially and environmentally responsible right from the start. Plus we all need as much good karma as we can get!

Check out my group of entrepeneurs! I can't wait for my first email update.

* I actually hate the term "developing country". To me, it implies that every country should aspire to be just like the U.S. And that has a bad stink.

I sold my Chinese style painting!! I hadn't even taken it off the scanner yet! Yeeeeeee! And the lovely, amazing lady also bought the Deformedest Little Monster as well. So he has a new home! Boy, packing something that needs to stay flat and somethng that's bulky and has lots of lumps presented an interesting challenge. I posted it today. *crosses fingeres*
No comments:

The Tumbleweeds Are Tumbling....

I know the three of you who read my blog have been waiting with baited breath to read my next post. Sorry to disappoint! I still haven't made anything. Why? I won't wang on about my personal problems at you (that's what Boy is for!), but I have been feeling Bler and Schner for various reasons. And that affects my creativity.

I did manage to toss off a painting in Chinese ink last week: 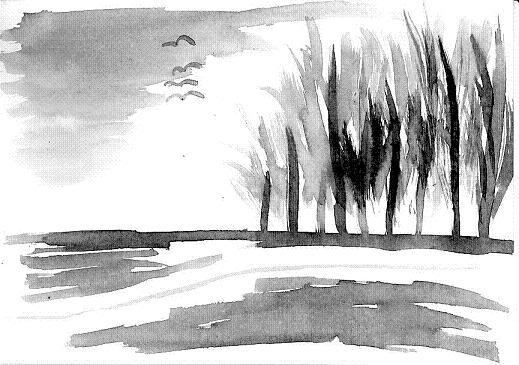 It's a pretty standard scene of the type of thing I used to do years ago. I'm either returning to my roots, or doing the artistic equivalent of assuming the foetal position. Not sure. I made a second one of a tree, but I didn't like it as much. My paintings are much better when I do them from life, not from my head. Or perhaps I'd lost my mojo after the first one.

I have also been researching the zine I'm writing for a Swap-bot swap. I'd been meaning to write my first zine for a while, but it turns out for once having a deadline is making me work for it instead of making me want to beat my head against a wall. All will be revealed. When I can be bothered. 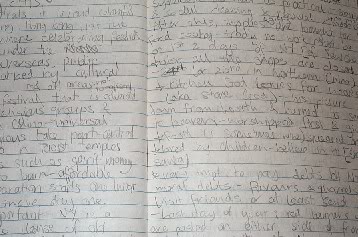 See? Writey stuff!
Then yesterday I went to the Etsy Sellers' picnic! Remember, that one that I was crapping myself over? I made Boy come along so I didn't pike out. (He's such a lovely boy, he must have been so bored! *hugs*) I felt completely lame and overwhelmed and unworthy. (And lightly crisped, after a few hours in the sun!) But everyone was really lovely! The food was delicious, and the crafts even more so. I got some interesting bits of info, but most importantly, I was stewing in the juices of like-minded people. I'm really not used to that. Don't get me wrong, I just adore my friends, but I can't really talk to them about how to execute a Magic Loop cast-on, or where to get real wool felt from. It's not something I've ever been worried about not having, but it would be nice to be there.

I was still feeling unsettled for some reason last night. I had a chat with Boy about why I haven't sold many items in my shop, and he came up with some reasons that are nothing to do with me that I hadn't thought of which made me feel a bit better. I started making a new toy: 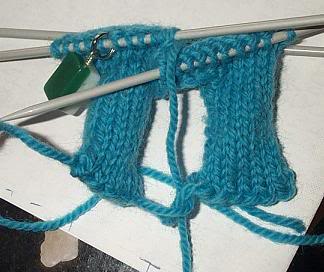 Leggies
I want him to be a bit more symmetrical and less bizarre than the ones I've made before. Nah, not really! I don't want to feel I'm making things to bow to the pressure of a mainstream public. I'm sure there's someone out there who'll love my monsters and give them a good home! And if not, *shrugs* I'll have a house stuffed full of altered wool.* Oh well! It was fun!

Then today, I went to the Melb Craft Maf.. Cartel Market. Wow! So amazing! 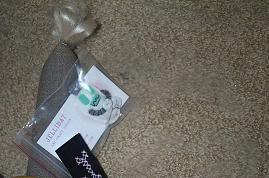 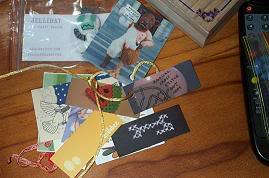 Purchases from the market inc. Robot Brooch; cards from the picnic
I spent a lot more money than I was planning to, a lot more quickly! But gawd it was fun! And as I said to Boy, it's OK because I'm supporting local artists. Right? ;)

* Instead of unaltered wool like I have now! heheh
P.S. Sorry for all the Shop content with no warning liberally splattered throughout this one. It gets all mooshy and smooshy sometimes.
No comments: