As the 8-week mark until my trip to Europe nears, I've naturally started to become focussed on what I'll need to take, what I'll wear, and of course what bag/s I'll use. Cos I'm such a girl. I've been trawling Etsy for a bag, the type with a long strap that goes over one shoulder. The trouble is, I'm not really sure what they're supposed to be called. Sling bags? Satchel bags? Messenger bags? Shoulder bags?

These were my favourites: 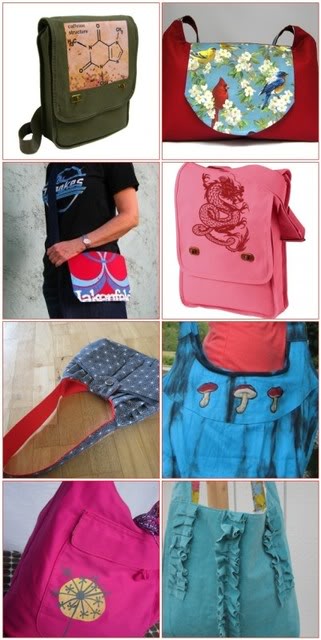 Previously In This Series:
#1 : Scarves
#2 : Slouchy Hats
No comments:

Crochet, the Couch and Cups of Tea Cat and a hot water bottle, originally uploaded by stripedtiger71.
What is the go with this extended cold??

Is is Climate Change? Have we entered a Nuclear Winter and no-one told me? Have I slipped into an alternate universe where it's always frikkin cold a la The Chronicles of Narnia? The cat hasn't started talking or anything, so that can't be it.

The cold has been making me kinda sad and grumpy, but this week I've been determined to get past it and get on with my life. I've started making a knitted scarf/necklace thingy, and I'm a bit excited about it because I got to start making it within 12 hours of having the idea instead of letting it slide away into the ether like so many of my ideas often do. I wonder if they're floating around out there somewhere, waiting to slide into someone else's head? Is that how they get into mine? Perhaps I should have a nice cup of tea.

Things I Want Right Now:
* cupcakes!
* tea from a teapot with a tea cosey on it!
No comments:

I met the cutest rabbit last night, and she confirmed what I'd been suspecting for a while: rabbits are adorable! 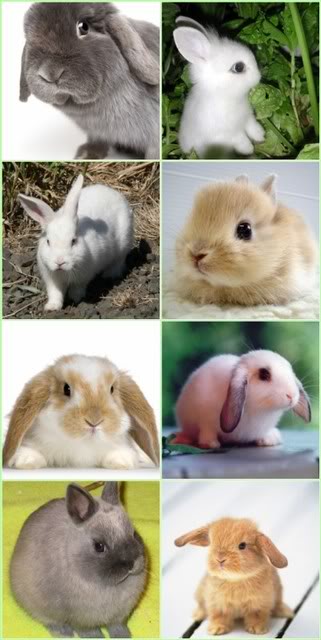 See what I mean?

Unfortunately sometimes life gets in the way, and I have to report that there was no crafting or arting at casa de la ApartmentCat this week. Well, not in my corner anyway. Boy did an amazing drawing for his course. You can check it out on his blog.

P.S. If you like cute things, I do hope you'll vote for Puska the Photogenic Cat [link defunct] in the Face of Whiskas competition. Disclaimer: Puska's owner is Boy's friend, so I kinda have a personal interest. He's genuinely cute, though!

Previously in the Obsessions series:
1. Spindles.
2. Terraria.
3. Bookbinding.
No comments:

Fashion Obsessions #2 - I Need A Hat!

It's so cold here right now! I swear it's officially the coldest winter since time began! The Bureau of Meteorology knows it! 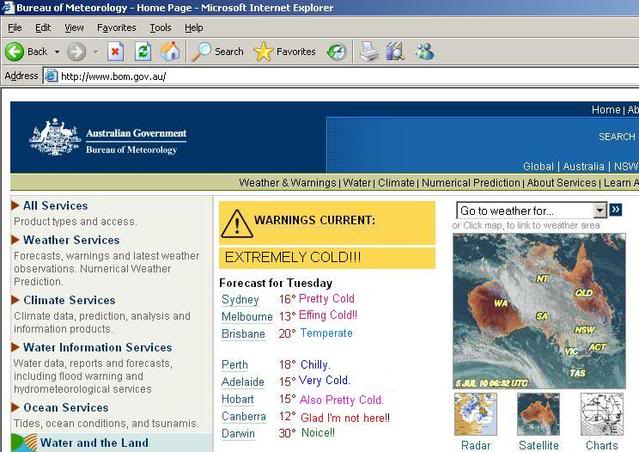 I know that other places are probably under 10 feet of snow right now, but ... I'm Australian, I'm not used to this glacial chill!

That's why today's Fashion Obsession is with Hats. Nice, big, warm, fuzzy, woolly ones. I always wear my hair in a ponytail, even in the dead of winter. I don't know why, I guess it's just my thing. normal hats don't really accommodate this bulk at the back. That's why I've been thinking about the slouch hat: 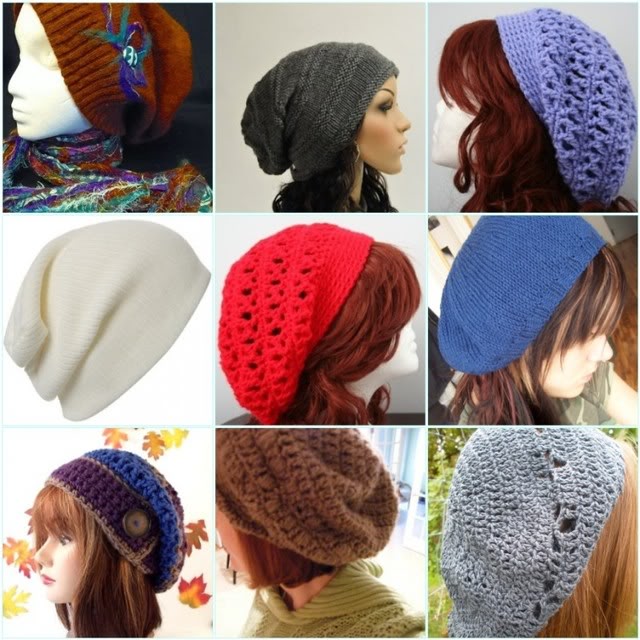 Mmmm, they look toasty, don't they?


Previously in this series:
#1: Scarves
No comments: 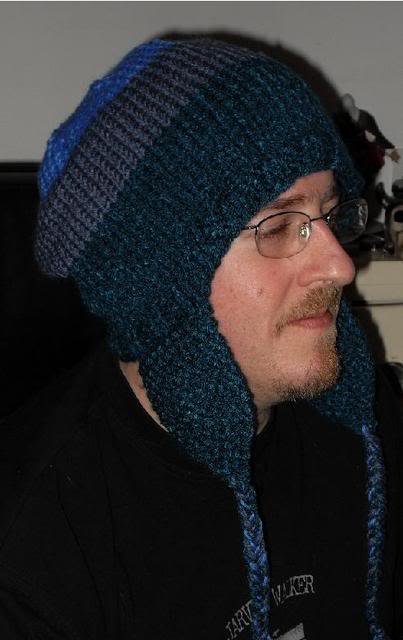 A man walks down the street in that hat, people know he's not afraid of anything!
Yay! Now his head and his ears will be warm! There are more details about the hows and the whys in this post.

And, I'm pleased to say, that today I finished S's scarf in time for his birthday shindig (with about 5 hours to spare, as a matter of fact). 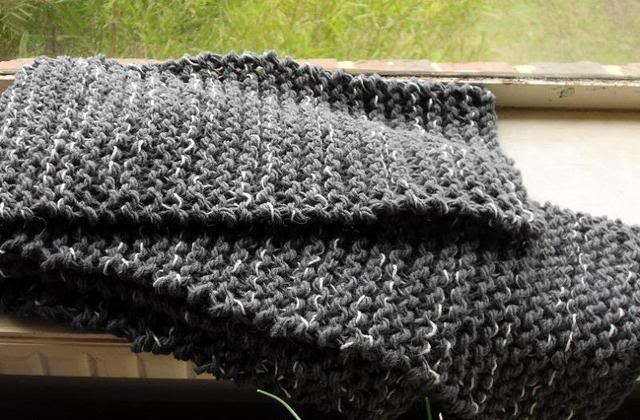 The old scarf-photographed-on-the-windowsill trick!
I was a bit cheeky: he's not one for being showered with gifts (gosh knows why!) so he declared that everyone should take the money they would have spent on a gift for him, and buy/do something nice for themselves. Well, I enjoy buying yarn and knitting things with it, so why not knit something for him? And I had a red hot go at it as well. I spent about 45 minutes choosing this yarn at Cleg's. I ignored the price tag completely. It's an absolutely gorgeous blend of wool and alpaca. And 'cause alpacas are just so darned cute, I had to find us a pic: 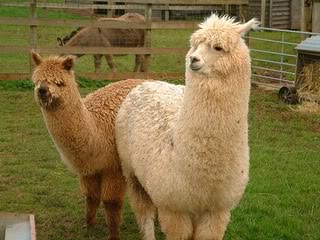 Cute!!
And look at these amigurumi alpacas from Moon June!: 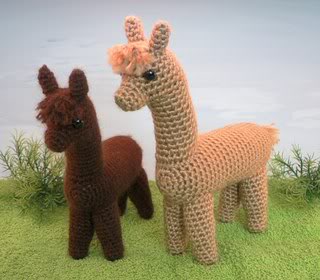 It's a well known fact that everything is cuter in amigurumi form.
And, in a blindingly white ultra mega moment of the ultimate productivity, I finished an art journal page today too!: 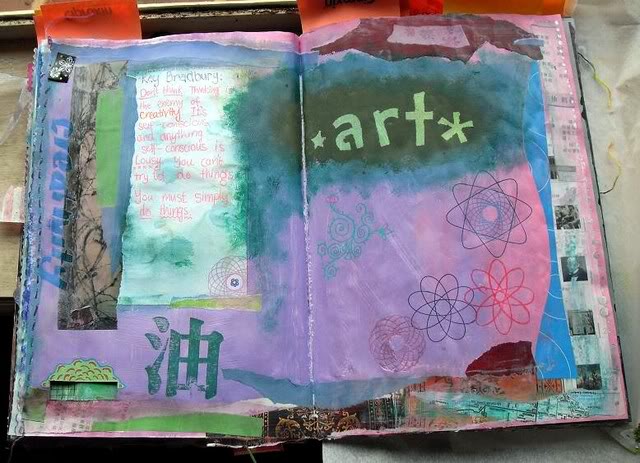 I really just put the finishing touches on it: some dabs of green paint and metallic rub, a couple of swirly bits and a quote from Ray Bradbury about creativity. I have quite a large collection of quotes saved on my laptop now, and I felt like using one. So I did! For some reason, it really irks me the way that quotes are traditionally presented, with the person being quoted at the end. I always look at that part first, and then I know who is speaking when I read the quote. If I read it as presented, then just as I'm letting the profundity of the thought sink in, I get interrupted with a jolt by the sordid detail of who it's attributed to. It irks me. Is that just me? I thought so. Anyway, I thought I'd put the author at the start and see how that feels. The quote says:

It's an important thing to keep in mind when doing art. Perhaps not so much when doing craft. But it definitely applies to meditating.

P.S. About that subject line: my powers of alliteration failed me today.
No comments: