The Boy Beanie, AKA Man Hat, is finished! Hot off the press. I had a lot of problems with it though!

Let me detail for you:

I knitted it up to the decreases at the top, and then I started on them, and when I was half way through, I thought, I can do better than this! If I distribute the decreases more evenly, I'm sure it will look better. So I undid it back to the start of the green section (about 20 rows) and re-did it, and sewed it up, feeling pretty proud of myself. I ended up with this: 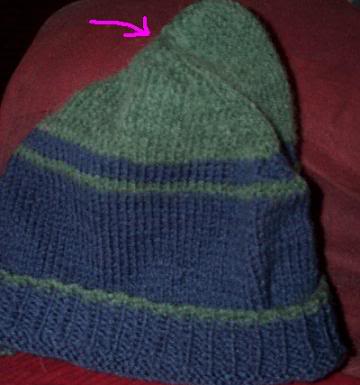 That pink arrow points towards the centre top of the beanie. See the huge bulgy bit behind it? Oh, woe! It happened because one of the sections stayed the same width and didn't decrease. There was no way to fix it. I heaved a huge sigh, ripped out the sewing, and pulled it apart back to the start of the green section again. Lesson No. 1: don't let your ego get the best of you, follow the pattern!

I started over again, following the pattern exactly. Now, the pattern is actually a hand-written copy that I copied out of a work colleague's knitting book a couple of years ago. (Footy Knits or something similear, if memory serves me correctly.) I knitted, I decreased, I sewed, just as the pattern instructed. I ended up with this: (again, the pink arrow points to the centre top of the beanie.) 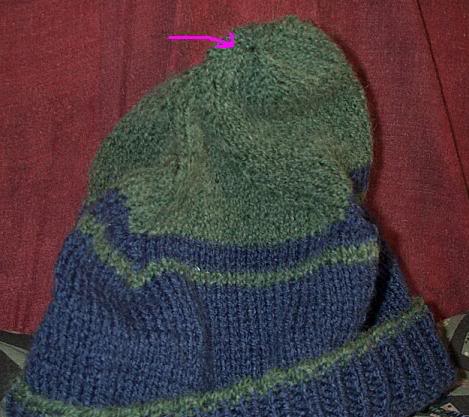 Lesson No. 2: the pattern may not necessarily be right. Now, sure, the bulge isn't as big as last time, but it's STILL THERE! Bugger! I'm not pulling the f%$king damned thing apart again!! Especially considering the mean daytime temperature at the moment of 14oC and my poor boyfriend's poor cold ears! But I was so upset and discouraged that I wanted to do something really simple. So I started this coathanger cover with a wool that I'd been thinking about for a long time:

I couldn't decide whether stocking stitch or reverse stocking stitch would highlight the variegated wool better, so I decided to do a bit of both. It ended up coming out in this really cool springy effect. I think I might buy some foam padding and line the hanger with it this time. Some of my old hangers are very not-comfy. Rather harsh. More minimalist than down-home-country.

Ok, you are all probably wondering what happened to the beanie.

A week later when I finally got around to it, I decided to do a quick repair job on it and hope for the best. Here is a pic of the work in progress: 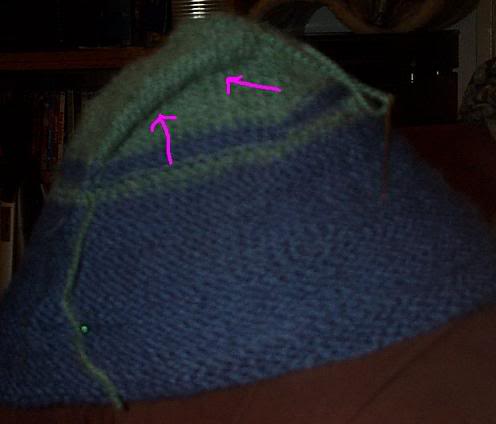 The arrows point to the line where I re-sewed it, folded it over, and am now sewing down the extra flap on the inside. I am using my knee to fill out the inside. I thought about just putting it on Anth's head, but I didn't know how he'd react to me saying, 'here, put this on your head' and then coming at him with a huge needle. I was quite proud of my fix job, and the upshot is: 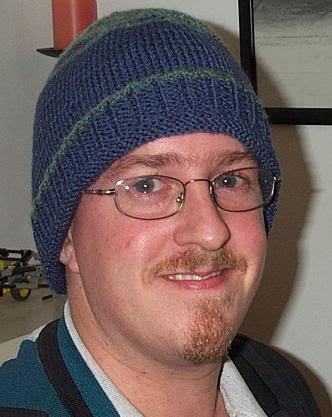 And for the grand finale - there is a secret little message hidden inside the brim of the beanie: 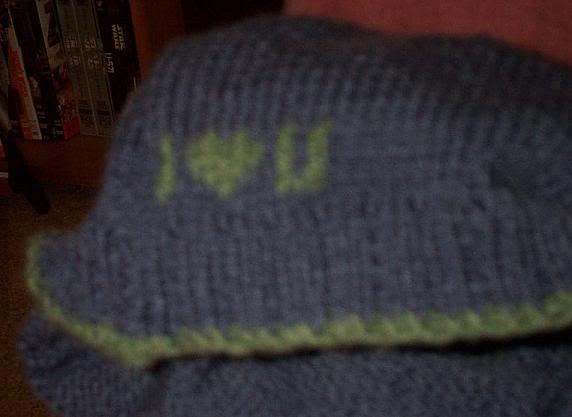 I think it actually turned out quite well. Lucky for the boy!