It's been two weeks since my first batch of decoden projects, so here's an update on how they've fared so far. 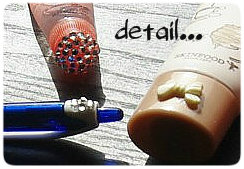 I've noticed that the durability of a deco project depends on a lot of factors: the type of surface to be decoed; whether it's curved or flat; the material the surface and gems are made out of; the size of gems used; the type of glue used; whether the item is going to be handled a lot.

All of my deco jobs were successful except one. I'm very happy with the lip gloss lid and the pen. Whenever I use my pen at work, it makes me happy! In fact, I want to add more to the next one and have a real "decoPEN"! The lip gloss lid also worked extremely well. Even though I grip the lid and handle it every day, the gems have stayed as stuck as anything.

The unsuccessful deco was on the BB Cream tube lid. This was the one I decided to do at the last minute. The bow charm was wobbly right from the start and came off after a couple of days. I know what went wrong, though. Even though the surface of the lid is only slightly curved (not like the domed lid of the lip gloss), the bow is much larger than the tiny rhinestone gems, so most of its surface area was not firmly attached to the lid. Also, I think the back of the bow is made of a different material to the other gems; that could have had something to do with it.

A few of the tutorials I've seen advised using two-part epoxy glue (araldite), so next time I'm at the hardware shop, I'll get some and see how it goes.