A Noob Reviews : Tang Garden (the Board Game)

Tang Garden is a "Eurostyle" game from ThunderGryph games, which was brought to life through Kickstarter. ("Euro" games are those in which players work together or simultaneously on their own part of the game, but don't directly compete.) 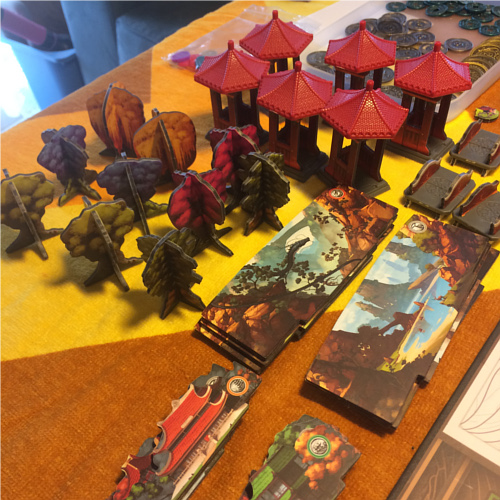 Tang Garden is set in the Golden Age of China. The aim of the game is to build a beautiful Chinese style garden which appeals to the various characters in the game. Players take turns to build up the landscape and add decorations such as pavilions, bridges, trees, and flowers to the board. 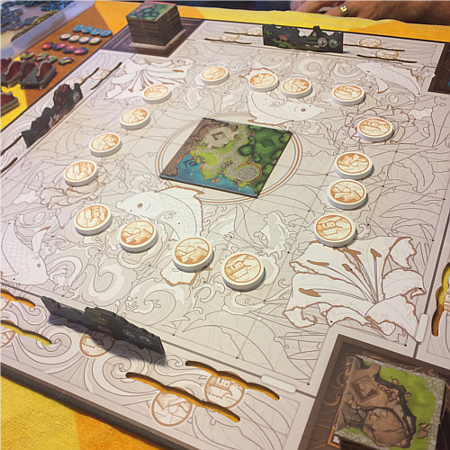 The game board is plain -- to begin with! There are landscape tiles to lay down in several variations, namely greenery, water and rock. There are also various decorations, some of which are 3D, including pavilions, bridges, birds, flowers, and trees. Landscape panels are placed vertically in slots on each side of the board, with room for up to 5 on each side. 12 character figurines with corresponding character cards, a character board with blocks to collect, decoration cards, landscape tokens, character influence tokens and coin tokens are also included. This seems like a lot of stuff, but it all makes sense once you start playing the game. 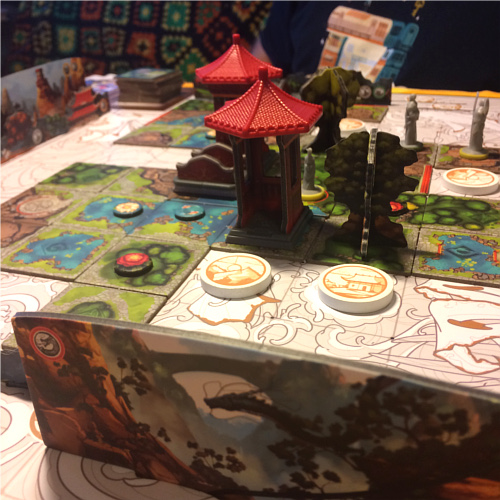 Each turn, the player can choose to either build or decorate. Building involves placing a landscape tile on the board to expand the garden. These feature either greenery, water or rock, and the edges must match up to the adjacent tiles according to certain rules. This aspect of the gameplay is very similar to Carcassonne, if you've ever played that. On certain positions of the board, there are round landscape tokens. A player can collect a landscape token when placing a landscape tile on this spot, and then has the right to place a vertical landscape panel on the edge of the board.

Decorating involves adding a decoration to the board. It's probably best to wait until there are a good number of landscape tiles on the board before starting to decorate. The player picks up several decoration cards, chooses one to keep, then places a corresponding decoration onto the board. Points are awarded at the end of the game for each decoration, and bonus points for sets, and the decoration cards help to keep track of how many each player has placed. 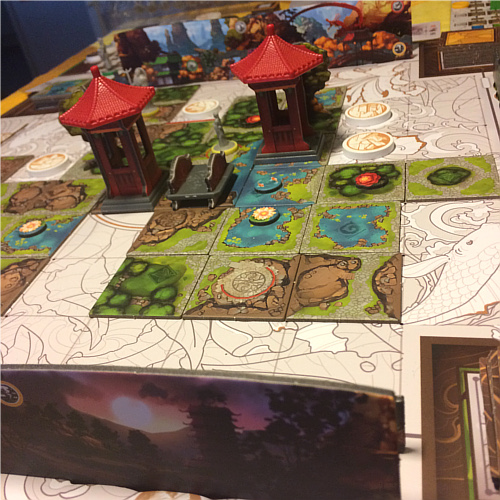 After this, the player can choose to do an influencing action. This involves the characters in the game. Characters include the Emperor, Empress, Lady, Poet, Monk, etc. Each player starts out with one character and can collect up to three more during the game. The characters have their own attributes which can help or harm a player both during the game and at the end. For example, the Empress earns 6 coins for every pair of flower cards that the player collects. However, if she can see the Emperor or the Lady at the end of the game, the player loses 9 coins. (I'm sure there is an intriguing story behind this!) Three of the four characters that a player collects can be placed on the board, and the position and direction they are facing are very important. This is where the vertical landscape panels come into play. If the character is facing a landscape panel with a matching symbol (e.g. sunset, deer) they earn extra coins at the end.

To be able to acquire more characters, players must collect landscape blocks, which are earned through decoration cards, and then placed on the player board to keep track. Special lantern tokens are available to influence characters, such as allowing the player to change the way the character is facing. 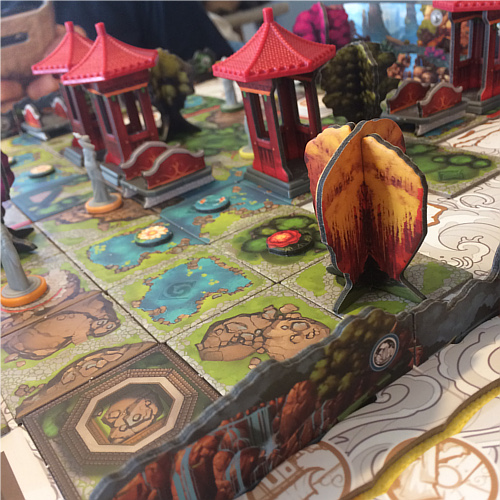 Once the board is almost full (when there are three or less of the round landscape tokens left), the game ends and the coins are awarded. To some extent, you can prolong gameplay by avoiding placing tiles on a square with a landscape token on it, but eventually the game must end. The instructions guide you through the awarding of points in the form of coins. The player with the most coins at the end wins.

++ Everything about this game is visually stunning. The creator clearly put a lot of thought into the concept of an aesthetically pleasing garden, from the flowers and trees to the landscape panels around the edge which introduce the concept of skyline views.
++ The 3D aspects of the trees, pavilions, bridges and landscape panels added so much to the game. They helped to really bring the garden to life. The character figurines added to this as well.
++ All of the pieces were very high quality, made of thick card or wood, with beautiful colours.
++ The idea of building a garden is just a pleasing concept in itself to create a game around.

-- There are a lot of pieces and parallel things happening during gameplay which seems very daunting at first, but it was very quick to get the hang of.
-- The cardboard coins were a bit standard. They were nicely designed, but not outstanding. Husband is a bit of an aficionado when it comes to that kind of thing, so perhaps we're spoiled? He replaced them with some metal coin tokens from his collection. Similarly, the character figurines were just slightly too small for my average eyesight to appreciate properly, though having said that they were very detailed. 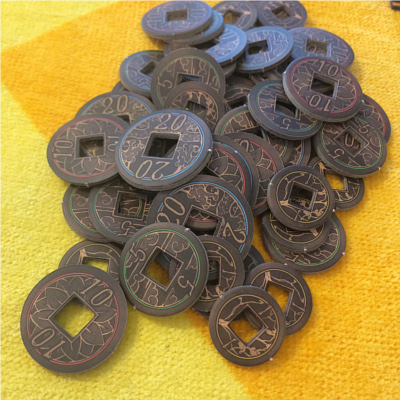 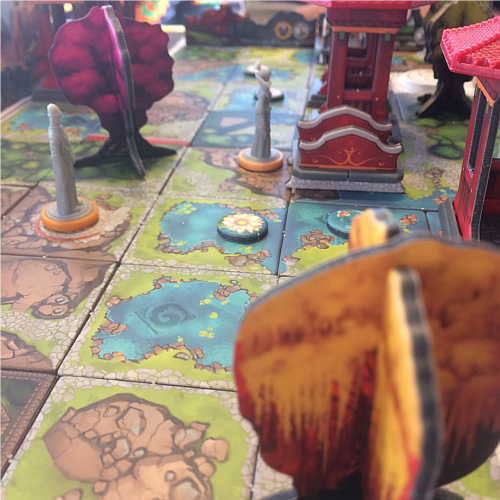 Tang Garden is not only a beautiful game, but it has a lasting playability. It's complex enough to keep me interested, but not so much to be daunting. I can see myself coming back to it again and again.