Please note: this book was provided for me to read and review by LibraryThing's Early Reviewer programme. You can rest assured however, that this is (as always) an honest review! 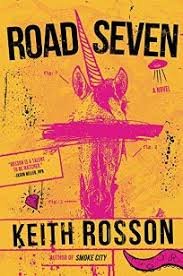 Brian is a loser -- a thirty-something failing Phd candidate with no girlfriend and an annoying flatmate. He's had debilitating headaches for years that he can't be bothered doing anything about, and is a disappointment to everyone in his life.

Mark Sandoval is an enigma. A best-selling author notorious for his conspiracy theory-laden output, he has mysterious glyphs scarred all over his body, supposedly given to him during an alien abduction.

When Sandoval hires Brian to travel with him to a far-flung corner of the world to investigate an alleged unicorn sighting, that's when things start to get interesting. The main action is set in Hvíldarland, a fictional country that's a lot like a miniature version of Iceland. The locals are tough and don't take kindly to strangers, and there's definitely something fishy going on. Not only is there an American military base hidden in the woods, but the area Sandoval wants to investigate is reputed to be an Álagablettur, a sacred place of power haunted by spirits.

Is the unicorn real? What's really going on at the military base? And can Brian and Sandoval go even one day without being beaten up?

I enjoyed Road Seven very much. It had a barbed wit reminiscent of Chuck Palahniuk and subject matter worthy of The X Files which made it intriguing and readable. I'm also fascinated by all things Icelandic at the moment, so knowing it was set within that culture made it even more interesting.

My only criticism is that it takes a long time to get to the action -- the protagonists only arrive in Hvíldarland about a third of the way into the book. Once it gets going though, I was completely absorbed in the story. At the end, some of the ends were tied up tight, and some were left hanging loose. Sometimes I find loose ends annoying, but in this book, I found that the right ones were handled in the right way.

Would I read more from this author? Definitely!