Please note: this book was provided for me to read and review by
LibraryThing's Early Reviewer programme. You can rest assured however,
that this is (as always) an honest review! 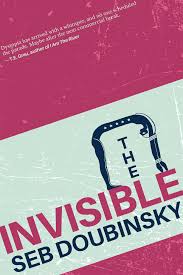 The Invisible is a noir police mystery set in the not-quite-New-York city of New Babylon. Georg Ratner is the police commissioner, and finds himself walking the tightrope of politics during an election year while investigating the murder of his former partner and the appearance of a new and mysterious drug called Synth. Not only that, but he also has to contend with a city-wide strike, a dead poet, and a secret society who believe that corruption is a living entity.

The mystery deepens when he finds that there seems to be no central source for the drug, and moreover it seems to have no negative side effects, but enhances creativity and peaceful feelings. Yet his superiors seem to want to crack down on it even more.

The book consists of very short, choppy chapters, most less than a page, and is divided into sections named after the major arcana in Tarot. This imbues the story with a mystical feel which contrasts with the gritty reality of murder and corruption in a very intriguing way. The magic intensifies when it's revealed that the Egyptian goddess Nut occasionally appears to Ratner in his dreams, giving him advice and answering questions. Music also plays an important part, with Ratner listening to songs inspired by the drug Synth and seeking out its creators. Despite the brevity of the text, the author pauses to describe a smell or the beauty of the season, which also helped to add a sense of the ethereal.

The Invisible is part of the City-States Cycle series. I wasn't able to find a numbered listing but it seems to be at least the tenth book set in this world so far.

I have to admit, it annoys me when I read a book and don't find out until later that it's one of the latter books in a series. I'm just a bit OCD that way. I was confused about some questions that presumably would have been explained had I read the series from the start. For example, the setting -- very similar to Earth but with different city and country names. Is it an alternate history or something else? Is it the kind of universe where magic is real? Can a goddess really help Ratner or is he just hallucinating?

The story also ended quite abruptly, with the mystery on the verge of being solved. It's hard to say whether the author intended it to be a self-contained ending, or if the mystery is solved in the next novel. If it's the author's style to leave major questions unanswered at the end of a novel, I can accept that, but if it's an attempt at drawing the reader in to continue on to the next in the series, it's kind of annoying.

Despite this, I did enjoy the story and found the concepts of a harmless drug and a police commissioner guided by a goddess to be intriguing, and I have to admit, the brief chapters appealed to my ever-shrinking attention span.


Would I read more by this author? Yes!