This is the second in my occasional series of tabletop game reviews. My first one was on Junior Monopoly: My Little Pony. Also, if you're interested in games, Husband has started blogging about them here.

Godzilla: Kaiju World Wars was another game that Husband got me for Christmas. I love Godzilla, so I was very excited to receive this -- especially when I saw that there were figurines inside! I think his quest to get me addicted to tabletop games is working.... 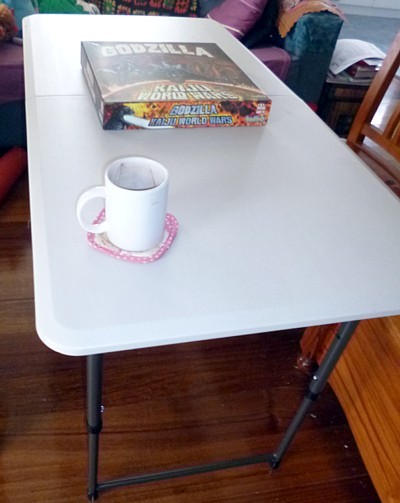 This post also gives me another chance to show off our new games table! 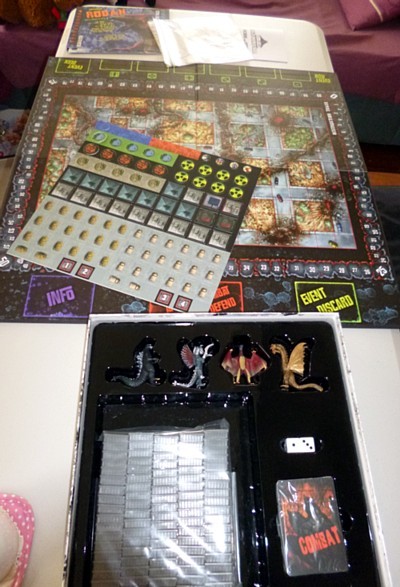 The Game:
Godzilla: Kaiju World Wars is based on the classic Japanese Godzilla series of movies. The monster, born from radioactivity, rampages through Japan, fighting other monsters or the foolish humans who try to kill him. Inevitably, destroying any cities that happen to be in his way. 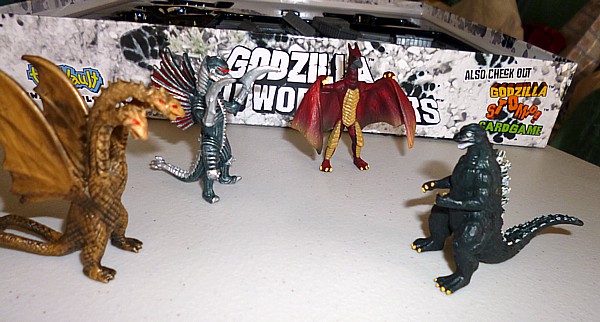 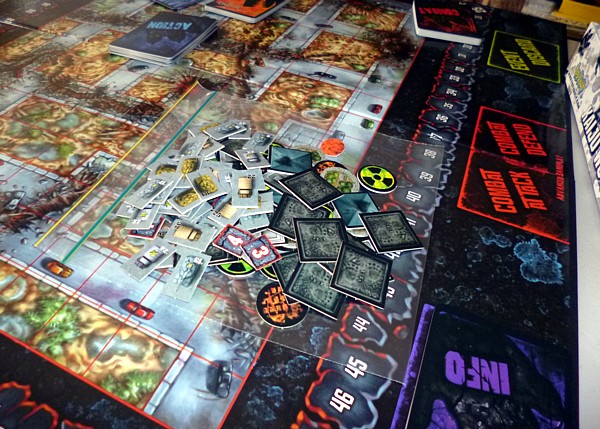 Features:
The board represents Tokyo, already half-destroyed by Godzilla and the other Kaiju monsters. Before the game starts, the board is filled with buildings, parks and ponds for the monsters to destroy. Tanks and Personnel Carriers are also placed on the board. The configuration of these is different depending on the scenario. Husband and I played "Destroy Tokyo!", which uses the simplified combat rules and is recommended for first time players. Each kaiju is issued with a card that has health and energy trackers, not to mention a cool portrait of the protagonist. Several Action Cards are placed along one side of the board. 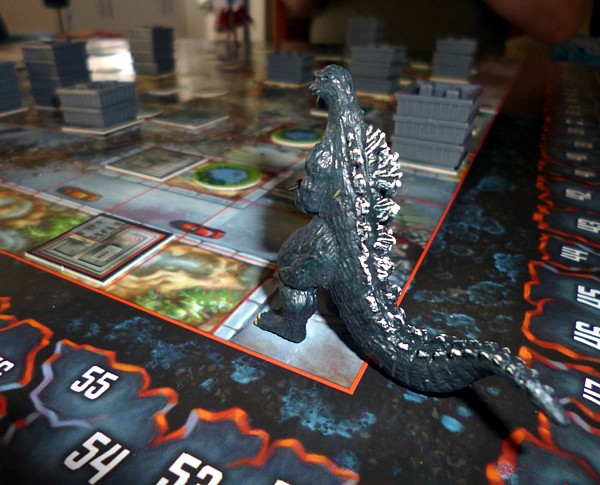 Godzilla is ready to rampage!
Gameplay:
Players take turns destroying Tokyo at their whim. Players may move, destroy a building, attack another kaiju or attack a Personnel Carrier/Tank, or all of the above during their move, until their kaiju's energy has run out. For each building, park or Personnel Carrier/Tank that a kaiju destroys, he scores Destruction Points. The taller a building is, the more Destruction Points the kaiju earns from destroying it. Personnel Carriers and Tanks can attack the kaiju back but, being weak humans, their attacks don't tend to do much damage. 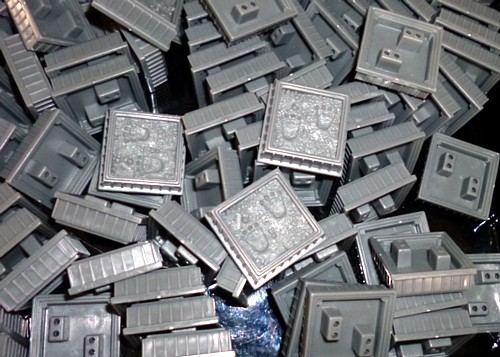 The plastic building tiles have adorable stomp-prints on them! 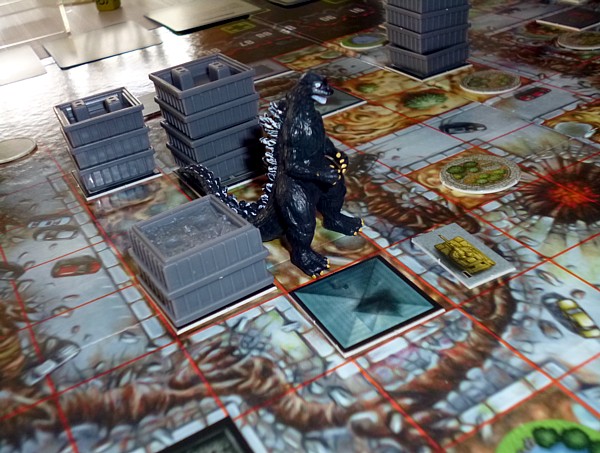 Hmmm, what to attack next??
At the end of each round, a die is rolled to determine the Action for that round. The card corresponding to the number rolled is actioned. For example, all tanks from that point onwards will be fitted with bazookas and are twice as likely to hit the kaiju. This aspect of the game adds an interesting twist, and can range from a minor inconvenience to a major, game-changing pain. 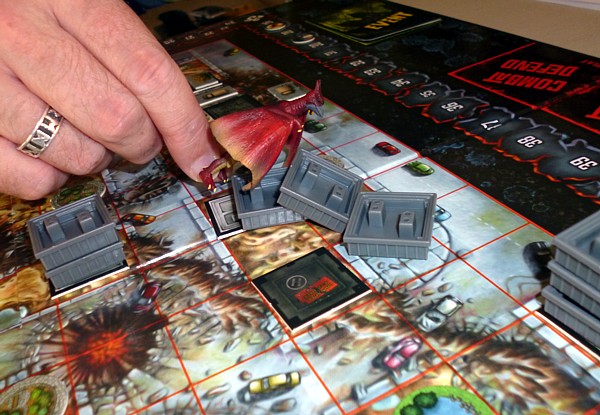 Rodan attacks a building, with matching action and screeching! 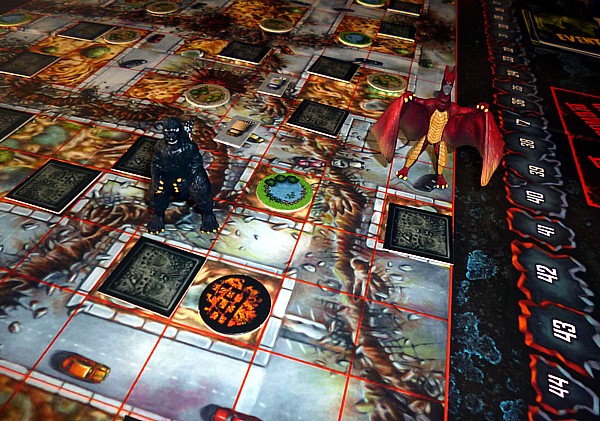 All of the buildings have been destroyed, there's nothing left but to attack each other!
Each scenario has different conditions for winning. In the scenario we played, the first to score 35 Destruction Points wins. However, we were having so much fun that we decided to make it 50. 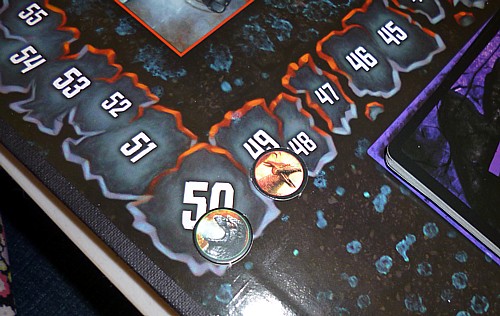 Oh look, I won! But only by one point!
Pluses:
++ It's Godzilla, what else can I say?
++ The board and tiles are very detailed, with buildings, rubble, craters and other assorted destruction. The building 'blocks' even had monster footprints imprinted on them. So cute!
++ The kaiju figurines are also very detailed and fun to play with.
++ There are several scenarios with a choice of simple or standard combat rules. While we've only played one so far, I'm thinking they will add variety to the game and extend its playing life.

Minuses:
-- Husband and I felt there weren't enough park and pond tiles. We wanted more to be able to destroy in the city!
-- Some pond tiles had ponds on both sides, and other tiles had a pond on one side and exploded rubble on the other. The instructions didn't adequately explain why this is.
-- The scenario we played was a bit short. There was still plenty in the city to destroy when we reached 35 Destruction Points. (On the bright side, however, the game was so fun we wanted it to go longer!)
-- It's just a small thing, but the Rodan figurine doesn't stand up very well on its own. We glued it on to a base, but now it doesn't fit back in the box properly.

Final Comments:
I found Godzilla: Kaiju World Wars to be a very enjoyable game. It would be a great addition to the games cupboard for fans of Japanese pop culture, as well as fans of general destruction of stuff. We will definitely play again.