7 Things I Love About Melbourne -- Part 1


Today is Melbourne Day. I'm embarrassed to admit I only found out about this anniversary for the first time this year. Obviously if a Melbournophile such as me hasn't heard of it, then it needs promoting, so I thought I'd assist by writing this post.

My home town of Melbourne was founded on 30th August 1835. It was one of the wealthiest cities in the world during the 1850s gold rush, the capital of Australia from 1901 to 1927, and continues to be the capital of art, good coffee and the sophisticated wearing of black today. In honour of Melbourne Day, I'm going to look at the things I love best about my hometown Melbourne.

I've decided to split this post into two because it was getting so long! While I was compiling it, Museum Victoria also announced a new online image collection, so there are even more pictures than I had originally planned. Today I'll be looking at the history and physical features that make Melbourne stand out.

Melbourne was founded in 1835 by a group of settlers led by John Batman. Yes, you read that correctly ... my hometown was founded by Batman. Rationally, I know that it's a complete coincidence -- the surname Batman actually means friend of Bart (short for St. Bartholomew). Even though I'm not a huge superhero fan, it still makes me smile every time I think about it. Consequently, there are many roads, parks and even a train station named Batman. 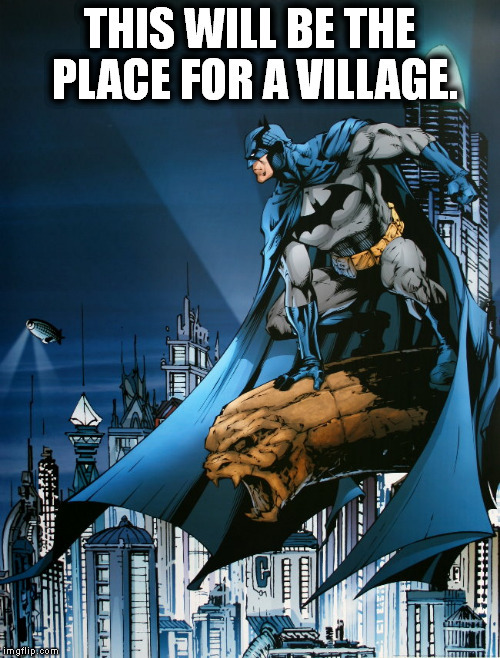 A meme only a Melbournian history nerd would get.
I used this meme generator. 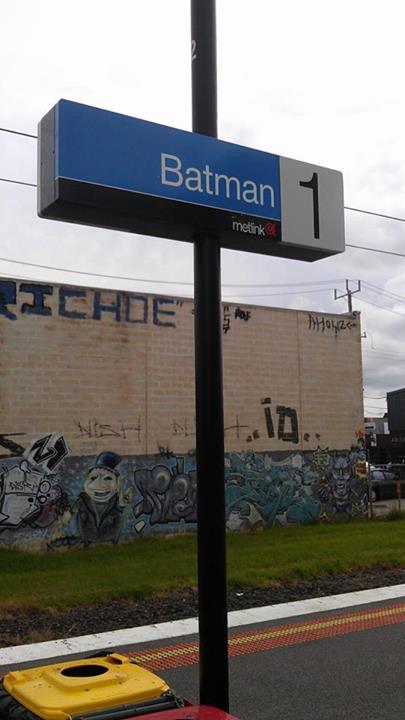 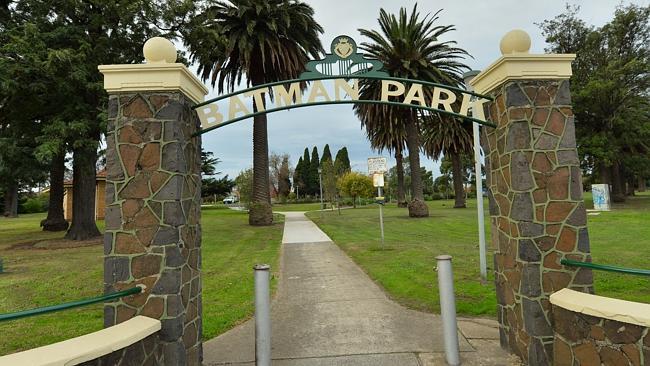 Picture source.
The layout of the city centre appeals to the maths nerd and orderliness nerd in me, too. The grid layout of the streets, designed by Robert Hoddle in 1837, is exactly 1 mile long and half a mile wide. Each city block is exactly 1 acre. Many of the streets, once they leave the CBD, travel in a dead-straight line for kilometres and kilometres. Others, just to be contrary, bend at a 45-degree angle and continue on from there. 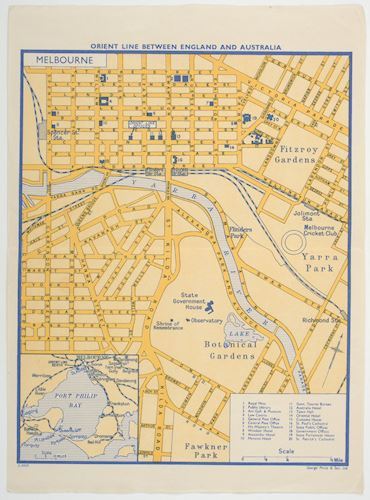 1948 map of the Melbourne CBD (at the top) and surrounds,
as issued to new migrants. Picture source. 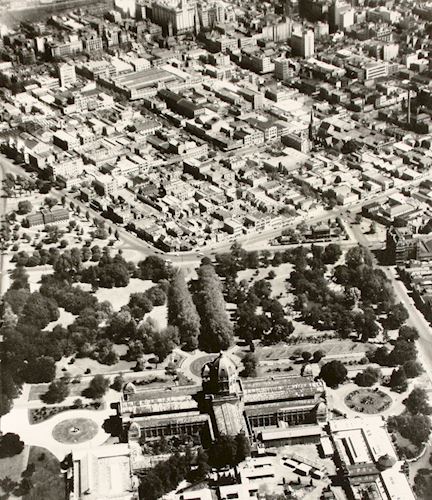 A view of the CBD from the north in 1948. Picture source. 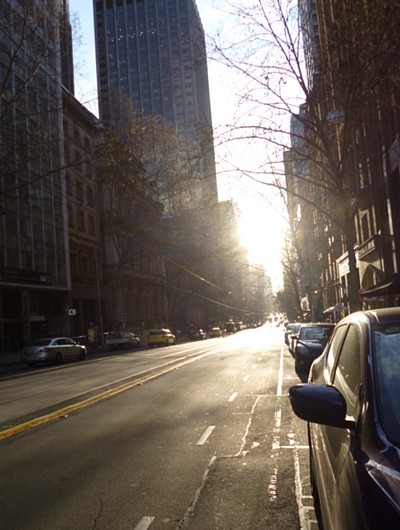 Early Morning: Collins Street, looking east towards the top end.
And then there's the tram nerds....

Melbourne has the largest tram network in the world, and it's the only commercial tram network still operating in Australia (all of the others have shut down, but a few were later converted to tourist attractions). Melbourne's first tram line, opened in 1884, was horse-driven, and the network has gone through cable and electric versions over the years. 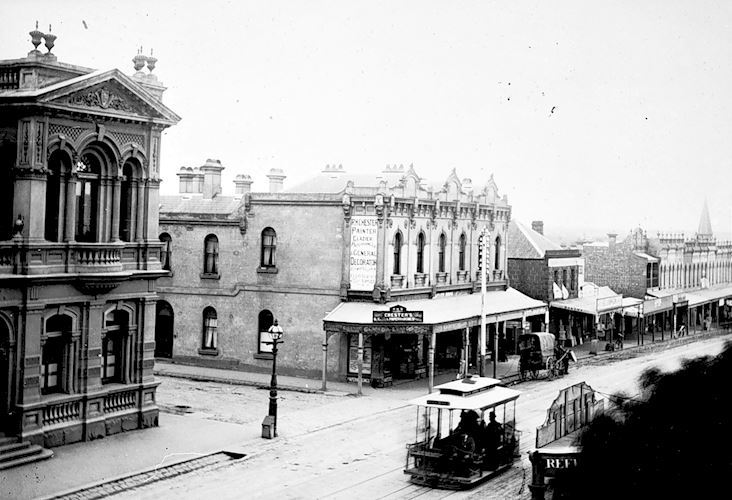 Cable Tram. High Street, Northcote. c. 1890s. Picture source.
In the early 20th century, rapid expansion of the city led to entrepreneurs building private tram lines to entice land buyers, helping to ensure a widespread network. While many tram networks throughout the world were closed down in the 1970s, supporters of Melbourne's system won out and it remained open. Programmes to build line extensions and upgrade stops have been implemented recently, so it looks like Melbourne's trams will be around for a long time yet! 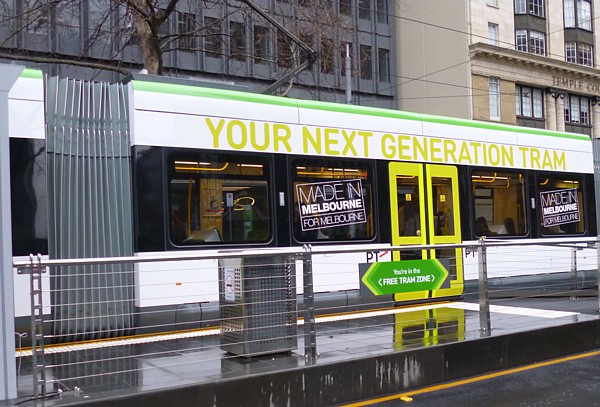 The E-class tram: your "Next Generation Tram".
I have loved trams ever since I saw the comedy caper film Malcolm when I was ten years old. The film's main character is a socially awkward kind of guy (he reminded me of myself) who is obsessed with trams. 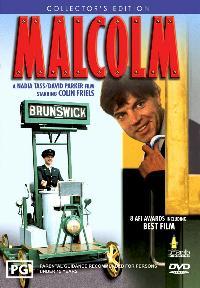 Malcolm.
When I moved out of home to go to University in the city, I finally had a chance to ride on them, and I took every opportunity I could!

Aside from the fact that trams are an instantly recognisable symbol of Melbourne, there's just a different feeling to riding on a tram. It's hard to explain. Perhaps because there are less people than on a train, and everyone is on a single carriage, there's more of a sense of camaraderie. Because trams travel along roads, there's a chance to observe the people and life of the city as it goes past. This is vastly different to trains, where you mostly see people's graffiti-covered back fences by the side of the track. It's also fun to find out what sort of tram you'll be travelling on when it pulls up at the stop: an ultra-sleek modern model, or a 1920s Red Rattler.
(Well, technically, these days most lines have the same model of tram running on them consistently, and the Red Rattlers are only used in the CBD as a free service for tourists, but I still love seeing them!) 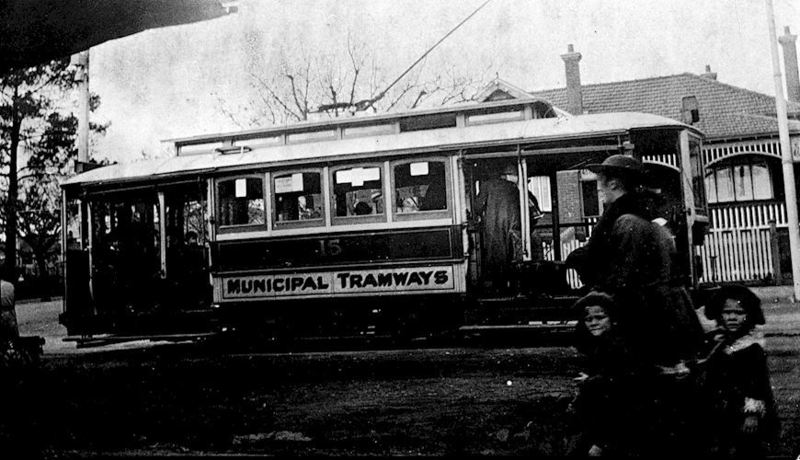 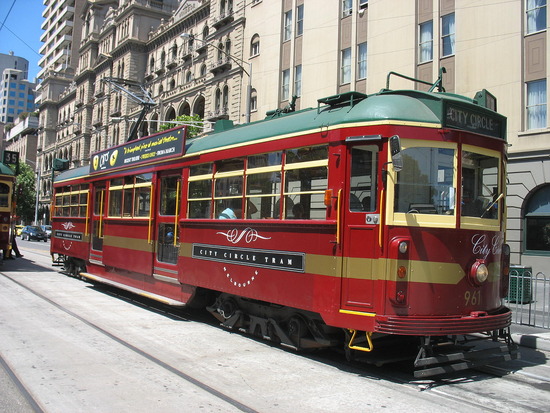 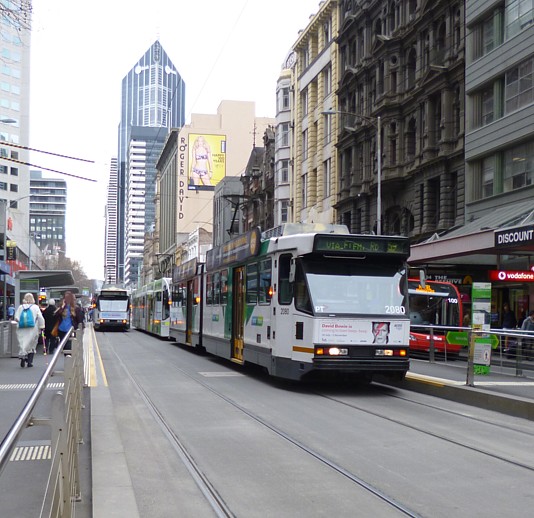 Old trams, new stop: this upgraded stop at the corner of
Collins and Elizabeth streets was only re-opened a few months ago.

According to the boffins at the Bureau of Meteorology, Melbourne's notoriously changeable weather is due to its location at the head of Port Phillip Bay, where cool sea breezes mix with warm continental air. A common phrase to describe our climate is "four seasons in one day". Crowded House even wrote a song about it. 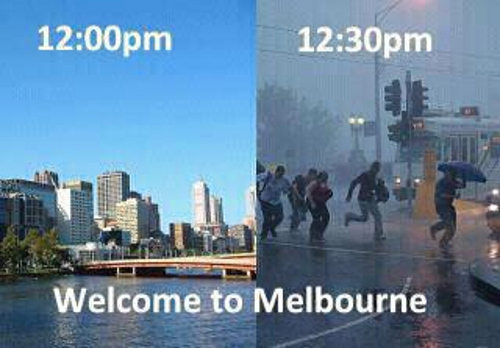 Think this is just another meme? This really does happen!
Picture source.
I can confirm that this is accurate. Actually, "four seasons in half an hour" is more accurate! I'm not kidding about this: the sky will be bright and clear, then suddenly dark clouds will move in and it will pour rain. Within 15 minutes, the clouds will have moved on and it's sunny again. It can pour rain all day in the middle of Summer, and there can be sunny short-sleeve weather in the middle of Winter. I feel sorry for those poor boffins! The head of the Bureau of Meteorology recently retired, and he wrote this cute article on Melbourne's weather as a parting gift. 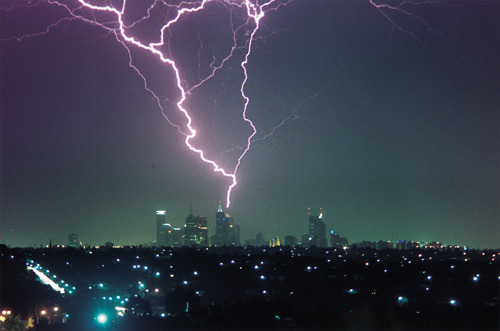 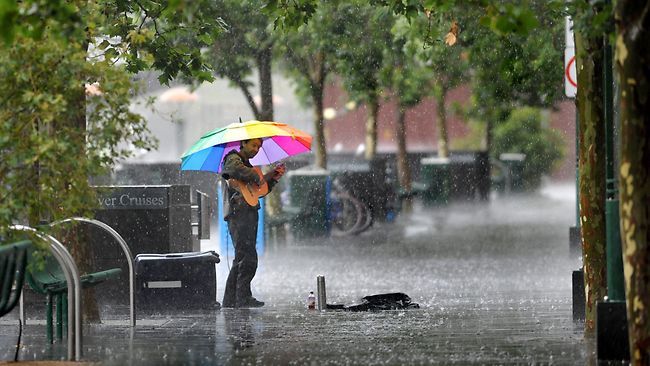 You can't let the weather stop you from getting on with life.
Summer 2010. Picture source. 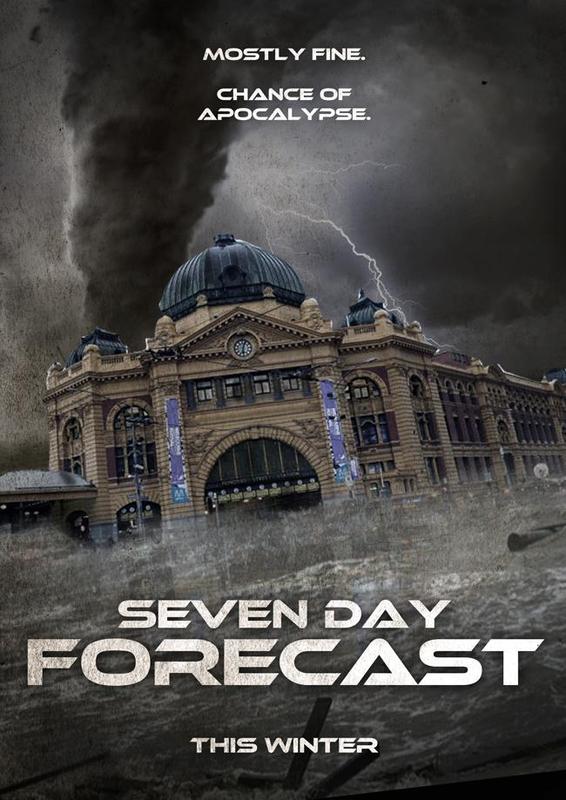 I couldn't resist adding this one, from
a reader-created series of fake movie posters. Picture source.
To quote the Crowded House song, "doesn't pay to make predictions", but living in Melbourne, I've learned that it pays to be prepared. I carry an umbrella and sunglasses in my bag every day of the year. I put on sunscreen every morning without fail, not just because beauty experts recommend it, but because the middle of Winter is just as likely to be sunny as rainy. Melbourne does have semi-predictable weather however, otherwise I suppose the Bureau would have given up years ago! Which brings me to my next section...

You might think from the above section that Melbourne's weather is crazily unpredictable all year round. Melbourne does have seasons though -- distinct enough to be noticeable, but not so extreme as to cause much inconvenience. Thunderstorms herald Spring. Summer is hot, but not humid, and the changeable weather means there are usually never more than a few 35oC (95oF) days in a row. Autumns are mild and hazy, and Winters, though quite cold, have nearly as many sunny days as rainy. 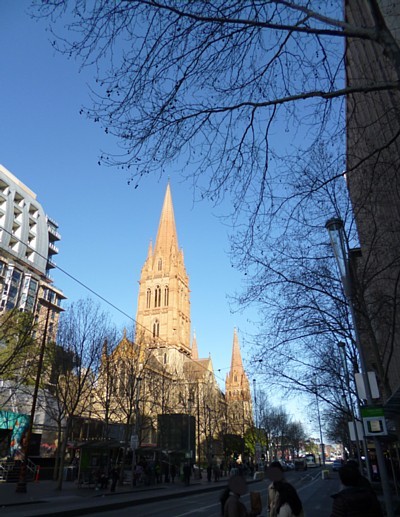 Swanston Street on a sunny Winter's day.
The indigenous Brambuk people of this area recognise six seasons. I found the Brambuk Calendar online a few years ago and, paying note to its cycle over the last couple of years, I do think this is true. It certainly seems to fit the Southern Australian climate better than the traditional 4 season model that we have inherited from Europe.

This version is from my personal calendar.
Our climate is warm enough to stimulate the double growing season that many in the Northern Hemisphere can only dream of. Some plants only flower in Winter when the rain is abundant, so we have colour nearly all year round. Southern Australia is quite a good place to be a gardener. 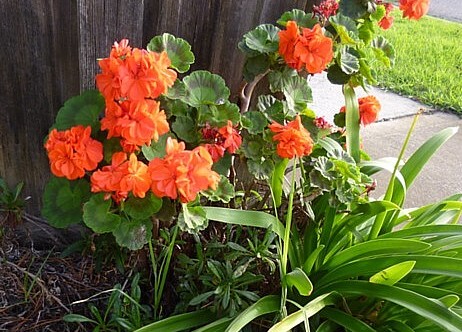 These geraniums in my garden just won't stop!
In my time I've seen heatwaves, torrential storms, flash floods, hail the size of tennis balls, the Great Dust Storm of 1983, a quadruple rainbow, many willy-willies, and a lenticular cloud. The only thing which I've never experienced living in Melbourne is snow. 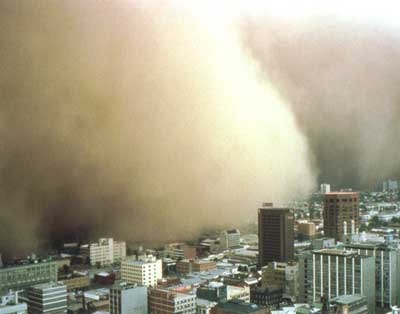 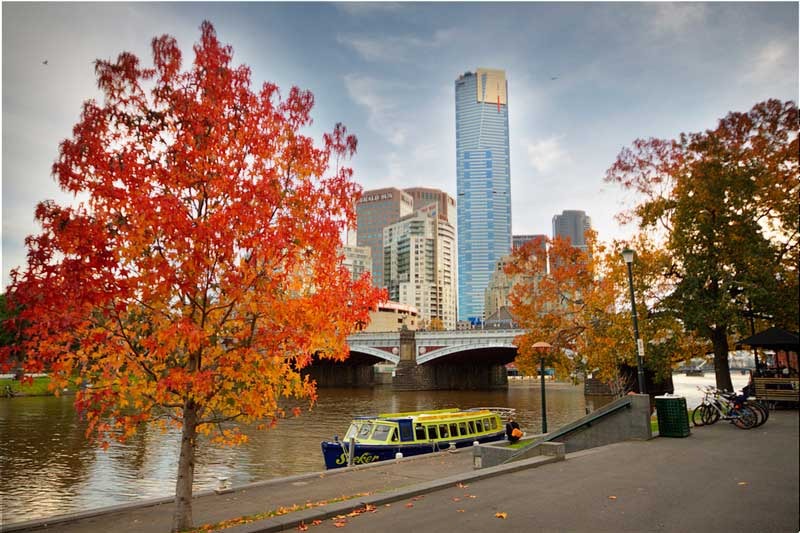 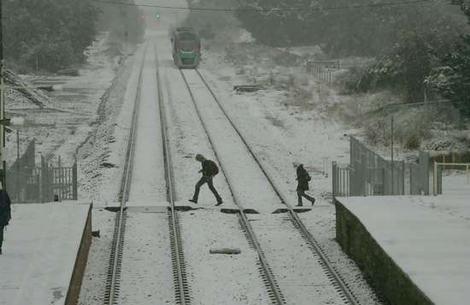 You don't have to go too far for snow, though.
Woodend, 70km from Melbourne, June 2007. Picture source.
Stay tuned next time for Part 2, in which I'll cover food, culture and more!