Lately I've been interested in learning more about herbs -- growing them, cooking with them, and herbal remedies. I remember when I was at Uni, experimenting with making rosemary tea when I had a cold, or mixed honey and garlic for a sore throat. I bought the ingredients from the supermarket back then, but this time round I'd like a more personal touch. My track record for growing herbs is pretty dismal so far though, so when I saw the Magica Herbae subscription box from Belladonna and Bones, it seemed just the sort of thing to get me started.

I've actually received three boxes so far, but today I'll concentrate on the Yarrow box. Each box focuses on one herb, and usually comes with some dried herb, an ointment, a tincture, and one or two more items. There is also an informative booklet and a letter with updates on the garden. I enjoy the letter because the maker of the box, Raheli, also lives in Melbourne and so it gives me information and insights about gardening in my local area. 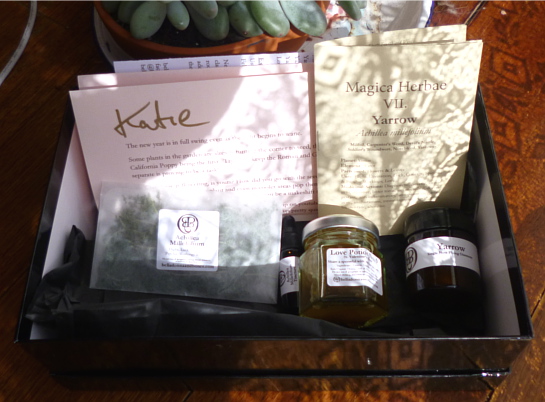 The Yarrow box contains:
✧ dried yarrow, which can be used in a tea or incense
✧ single note yarrow ointment, for application on the skin
✧ yarrow tincture, which is yarrow essence in alcohol, to be ingested in a glass of water, etc
✧ Yarrow 'Love Potion', which also contains damiana, honey and whiskey. It can be taken by the spoonful or mixed into an alcoholic drink 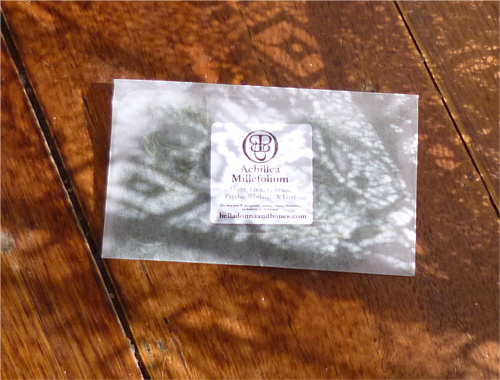 According to the booklet, Yarrow applied topically is good for bruises, cuts, grazes and rashes. It is a blood clotter when applied to wounds. When taken internally as a tea or tincture, it aids digestion, and is a diuretic, anti-inflammatory, anti-histamine, decongestant, analgesic, sedative and anti-spasmodic. The dried herb can be burned as an insect repellant. And, if you're so inclined, it increases psychic awareness, especially during divination, and attracts helpful people when held in the hand. In previous times, girls would use it to see if their love was true. In China, the stems were used to make I-Ching sets. 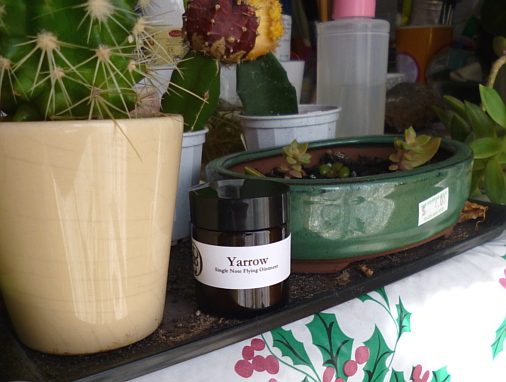 There is so much information here and so much that Yarrow can be used for, I'm a little overwhelmed! I have a small cut on my finger that I got when cutting up some vegetables, so perhaps I'll use the ointment on that instead of my normal Germoline, and see if it works. And of course, Valentine's Day is coming up -- perhaps I might be able to convince Husband to taste the Love Potion with me! 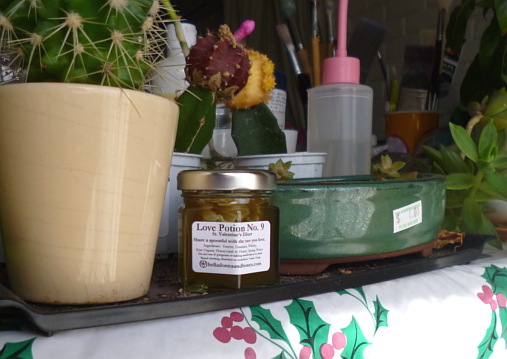 The Magica Herbae box is released every two months, with the subscription renewing after the third box. I've already signed up for the next set, I'm enjoying them so much. I'll write about the other boxes I've already received soon.